The USMNT Outcasts: Sizing up the candidates missing out on September 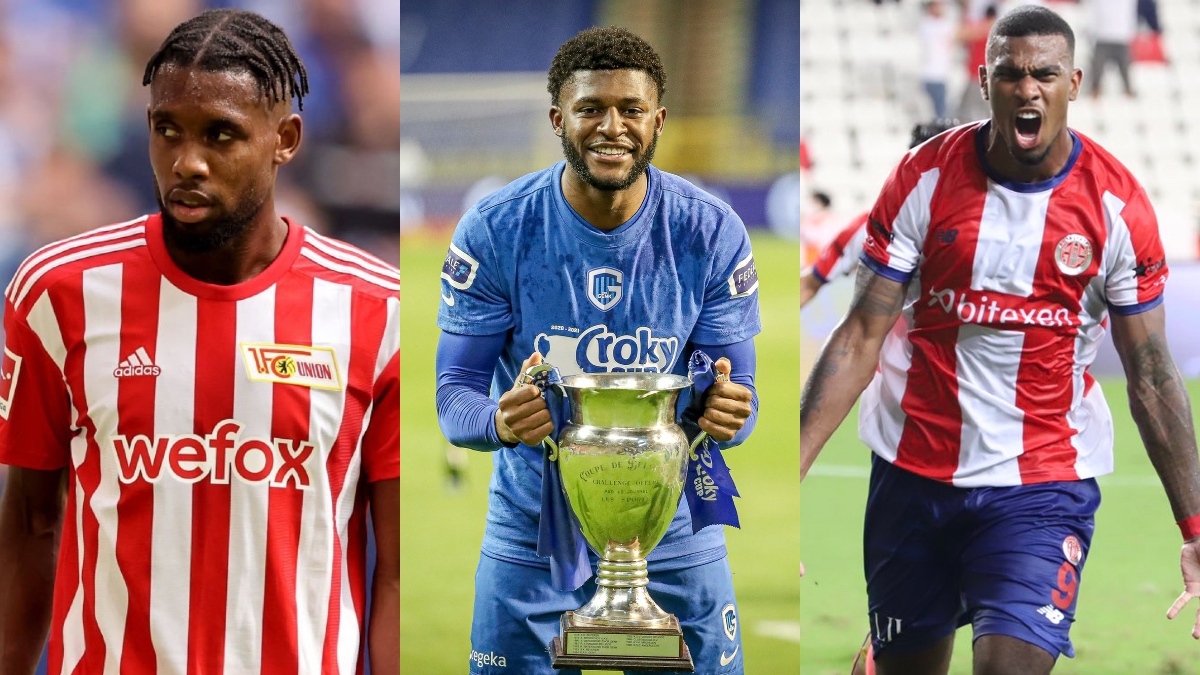 Depth is a good thing for a national team to have, and the reality is the U.S. men’s national team boasts more depth of options than ever in its history. That also means players will consistently be left out that are worthy of being included in any national team roster.

Throw in a looming World Cup and all of a sudden a roster omission feels like much more than a normal absence.

That is why Wednesday’s USMNT roster announcement triggered some predictable questions about players who were left out by Gregg Berhalter, who made a point to state emphatically that players being left out of the September friendlies aren’t necessarily out of the picture for a World Cup roster spot.

As much as that may be the case for some, the makeup of the September USMNT roster made it feel like there are some players who have seen their hopes of reaching Qatar fade away or disappear altogether.

The reality is with two months of club soccer to go between now and World Cup camp, so a lot can still happen, from injuries to cold streaks to hot streaks that shake up the current pecking order.

Here is a look at the top players who missed out on the September friendlies, and where they stand at the moment:

Earlier in the year there were a handful of knocks on Pefok’s candidacy for the USMNT striker role. His painful miss in the World Cup qualifier in Mexico City became a big mark against him, but not as much as the fact he was dominating the Swiss League, leaving him open to questions about whether he could handle a higher level.

Pefok’s response was to make a move the German Bundesliga, and immediately start scoring goals for Union Berlin, which happens to now be sitting in first place in Germany. It felt like a foregone conclusion that he had done enough to earn a call-back to USMNT camp, but instead he heads the list of players missing.

And why is he missing? Simply put, striker prospects who Berhalter rates as being better fits in the USMNT system put themselves in position to be considered ahead of Pefok. Josh Sargent has hit an incredible run of form, scoring six goals in six matches for Norwich City to propel himself back into the fold. He holds up the ball well, presses well and the biggest knock against him was his struggles to find the net, which he has eased with his current hot streak.

Then you have Ricardo Pepi, who has not scored a goal for club or country in the 2022 calendar year. His move to Bundesliga side Augsburg fizzled out, costing him all the momentum he built up in 2021, but Pepi’s form back then really impressed Berhalter, who saw a perfect combination of size, mobility and defensive tenacity. Pepi’s loss of form knocked him out of the picture briefly, but his recent move to Groningen gave Berhalter the excuse to bring Pepi in for a closer look to see how far away he is from being the player we saw shine in World Cup qualfiying.

It is a safe bet that Berhalter brings three strikers to Qatar, and while Jesus Ferreira has a hammer lock on one of the spots, the other two are up for grabs between Sargent, Pepi, Haji Wright, Pefok and Brandon Vazquez. Pefok feels like the odd man out, but it will come down to whether Sargent can maintain his current form and if Pepi can hit his stride in the Dutch League. If either of them falter, or if any of the top three go down with an injury, then Berhalter will have a hard time justifying leaving out Pefok.

The kind of strong and quick centerback Berhalter prefers for his system, McKenzie lost ground in the central defender race earlier in the year when he lost his grasp on a regular starting role with Genk. That, coupled with the rapid rise of Cameron Carter-Vickers and Erik Palmer-Brown left McKenzie on the outside looking in.

McKenzie has responded by regaining his starting role with Genk, and playing at a high level in recent months, but that still wasn’t enough for him to crack the current preferred four centerback grouping, even though Chris Richards isn’t currently playing for Crystal Palace at the moment. Right now McKenzie is stuck on the centerback fringe with Palmer-Brown, waiting for an opportunity of any injuries happen.

The versatile defender was a Berhalter favorite early in World Cup qualifying due to his ability to play multiple roles, and fit in well if the USMNT used a three-centerback system. Sands struggled for playing time when he arrived at Rangers, which dropped him off the national team radar, but now he has become a regular starter for the Scottish giants as a central defender.

The good news for Sands is that he is getting a chance to play in some important matches for Rangers, although he has had a rough time in some high-profile fixtures. Those struggles have cost him his chance to gain ground on a relatively crowded group of central defenders, and it also feels less and less like the USMNT will be deploying much of a three-centerback look at the World Cup.

An excellent season in France earned Palmer-Brown a look in the summer, and he produced mixed results, losing ground to Carter-Vickers in the battle to break into the top four at the position. Now, as the new European season rolls on, Palmer-Brown has continued to be a regular starter in Ligue 1.

Right now it feels like Palmer-Brown is sitting in the 5th-6th centerback spot in the pool, and will need an injury or two to happen if he is going to break back into the World Cup group.

When Brooks signed with Benfica, it was seen as a chance for him to play in Champions League and make a late case for a recall to the USMNT. Unfortunately for the 2014 World Cup veteran, the Benfica move has yet to yield a single minute as he is stuck behind Benfica captain Nicolas Otamendi and 18-year-old Portuguese sensation Antonio Silva.

The reality is even if Brooks were to start earning regular starts, he isn’t a stylistic fit for what Berhalter wants from his centerbacks. Brooks is too slow to play the high line the USMNT wants to play under Berhalter, and while none of the top central defenders in the USMNT right now are anywhere close to as good a passer as Brooks, Berhalter believes the passing in his current group is viable enough to avoid needing to bring Brooks back.

Wright had his chance this summer to impress Berhalter and it was a bit of a mixed bag for the Antalyaspor striker, who is off to a strong start to the new Turkish League season with five goals already. That start wasn’t enough to offset a less-than-stellar summer stint with the USMNT, and right now he’s sitting as the fifth-choice striker in a race for three spots.

A breakout season with FC Cincinnati has propelled Vazquez into the USMNT striker conversation, and the fact he hadn’t had a look yet turned him into a fascinating prospect for folks who love a newcomer. But as much as his play could have earned him a look, the sudden flourish in form of Sargent, Pefok and Wright in recent months suddenly pushed Vazquez into the background and out of range.

He’s the 6th-best option at striker with three spots available, but the good news he is just 23, and if he can build on this excellent season, there’s no reason he couldn’t be a factor for 2026 when he would be at a prime age of 27.

That Luca De La Torre earned the call-up despite not playing at Celta Vigo while Mihailovic was passed over despite his excellent play in MLS with CF Montreal tells you all you need to know about how far Mihailovic is to breaking through to earn a place in Qatar.

There is plenty of competition for the advanced central midfield roles, including starters Weston McKennie and Yunus Musah, as well as Brenden Aaronson, but De La Torre’s inclusion suggests Berhalter is unlikely to ever choose Mihailovic over a healthy De La Torre. Of course, Mihailovic could potentially take part in an MLS-specific pre-World Cup camp and play himself into consideration if there are any injuries, but for right now Mihailovic looks very far away from being able to secure a trip to Qatar.

A perfect example of a European-based player making a successful jump to MLS and not hurting their national team chances, Moore has thrived with Nashville SC, but he also happens to play at a position loaded with veteran options.

Moore is the fourth or fifth option at right back behind Sergiño Dest, DeAndre Yedlin, Reggie Cannon and Joe Scally, but the position feels a bit more volatile considering Berhalter may need one or two of those names to play at left back, so Moore is probably closer to breaking back in before the World Cup than say some of the fringe strikers are.

The Fulham defender is enjoying a solid season in the English Premier League, following up an oustanding season that helped the Cottagers earn promotion, but the 34-year-old isn’t an ideal stylistic fit for how Berhalter wants to play. Ream is playing at a higher level than any of the central defenders in the pool, but his lack of speed makes him a liability in a system that requires its centerbacks to be able to cover ground and play a high line.

Does this mean Ream has no chance of making it to Qatar? He remains a long shot, but if there were a few injuries, including to Fulham teammate Antonee Robinson, Ream could be seen as a left-footed depth option in a pool woefully light on quality natural left-footed defenders.

The Club America sensation is enjoying a career year in Liga MX, and while it had long been believed that he had committed to playing for Mexico, fresh reports emerged in recent weeks suggesting he is open to playing for the United States.

Berhalter confirmed that Zendejas is under consideration and the two have spoken, but his decision not to bring him in for a look in September suggests it is unlikely he can push himself into the World Cup conversation between now and November when he has never been in a Berhalter USMNT camp before.

Could that change? Absolutely, especially when you consider the injury history of the top winger options in the USMNT pool. Gio Reyna and Tim Weah have dealt with plenty of injury issues in recent years, as has Jordan Morris, so there are injuries and Zendejas continues lighting up Liga MX, then a call-up for Qatar could absolutely happen.

Which of the aforementioned players are you most hoping to see in Qatar? Who did we not include on this list that you feel deserved to be considered for the September camp?