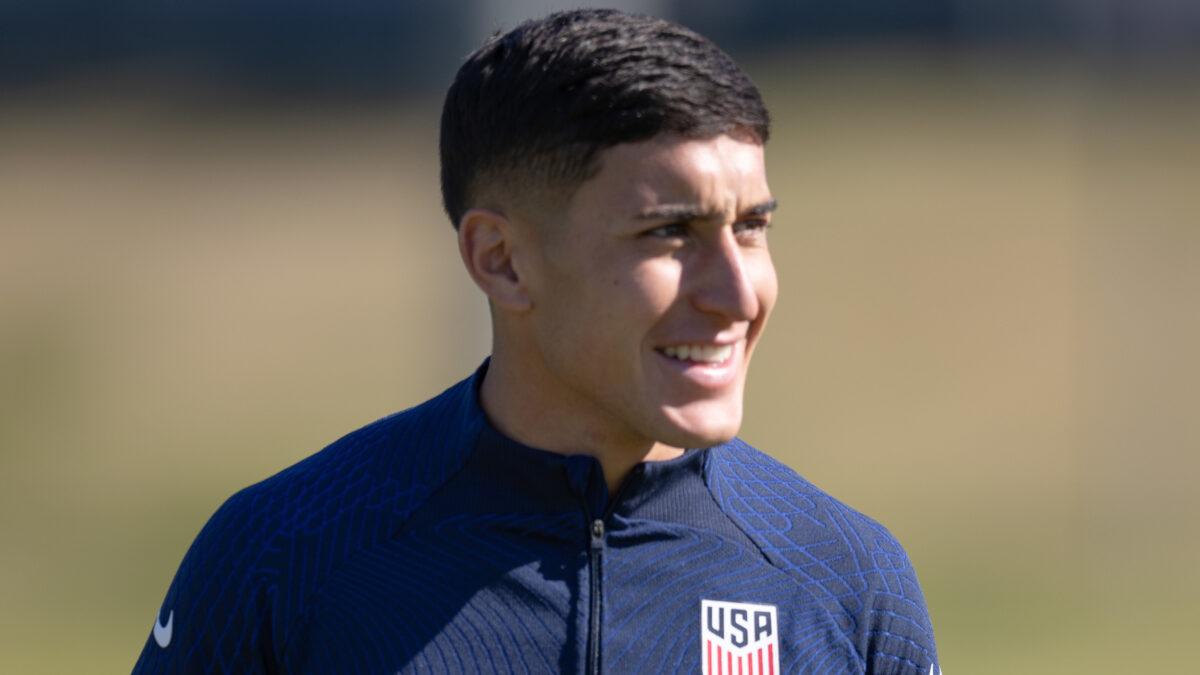 It has been close to eight years since Alejandro Zendejas last represented the United States on the international level, but after sparking his club career in Mexico, the former Under-17 national team standout has earned his first call-up to the full USMNT setup.

The 24-year-old comes into his first senior camp off the back of a Man of the Match performance for Liga MX side Club America in a 2-2 draw with Puebla, and stands poised to feature for the Americans on Wednesday in a friendly against Serbia.

After overcoming adversity in the early days of his Liga MX career, Zendejas is continuing to blossom into a rising star with seven goals and three assists in 22 combined appearances this season. Now with confidence on his side, Zendejas is excited to show what he can do in the USMNT’s first match of 2023.

“I’m enjoying the moment, taking the opportunity that I have this week and I having my mind focused on tomorrow’s game,” Zendejas said Tuesday in a pre-match press conference with reporters. “I’m hoping tomorrow is a win for the team and a good sign off for me. It’s an honor to be here so I am looking to carry what I am doing with Club America to the national team.”

Zendejas last represented the United States in 2015 as a member of the U.S. Under-17 men’s national team, featuring at the FIFA U-17 World Cup. A former international teammate of Christian Pulisic, Tyler Adams, and fellow January call-up Brandon Vazquez, Zendejas has since featured twice for Mexico at both the senior and Under-23 levels (in appearances that have since landed the Mexican federation in hot water).

Although Zendejas will return to Club America following the Serbia friendly, interim head coach Anthony Hudson is pleased to have the dual-national in camp for the first time.

“Back a while ago Gregg had started that process and had a conversation with Alejandro and then it was all about timing and this opportunity came up,” Hudson said Tuesday. “When we put the list together, we put names together and to be honest we didn’t think we would get him because it’s in-season right now.

“When we called the club [Club America], they were amazing, very supportive of him coming in which I was shocked at,” Hudson added. “Alejandro was so excited to come in, what a nice guy he is, and we are lucky that the club have let him come in for the Serbia match before heading back for a league game on the 28th. I think the players have really enjoyed having him around the camp.”

Zendejas’ long-term future with the USMNT remains unknown, but a positive performance against Serbia could be the first major step for him committing his future to the national team. He is one of several dual-nationals over the past few years to have the tough decision of representing either the United States or Mexico, following in the footsteps of Julian Araujo and David Ochoa.

The Mexican-born midfielder has noticed the interest from both countries and will continue to put himself in the best situation internationally thanks to a growing role at club level.

“I think it’s just from me doing my thing daily,” Zendejas said. “It’s from working hard over there [Club America] and playing well. The interest from U.S. Soccer came a bit later down the line because when I moved to Chivas I was not playing regularly, but moves to Necaxa and Club America have definitely helped. I just want to take advantage of my opportunities and I will worry about the future when it comes.”