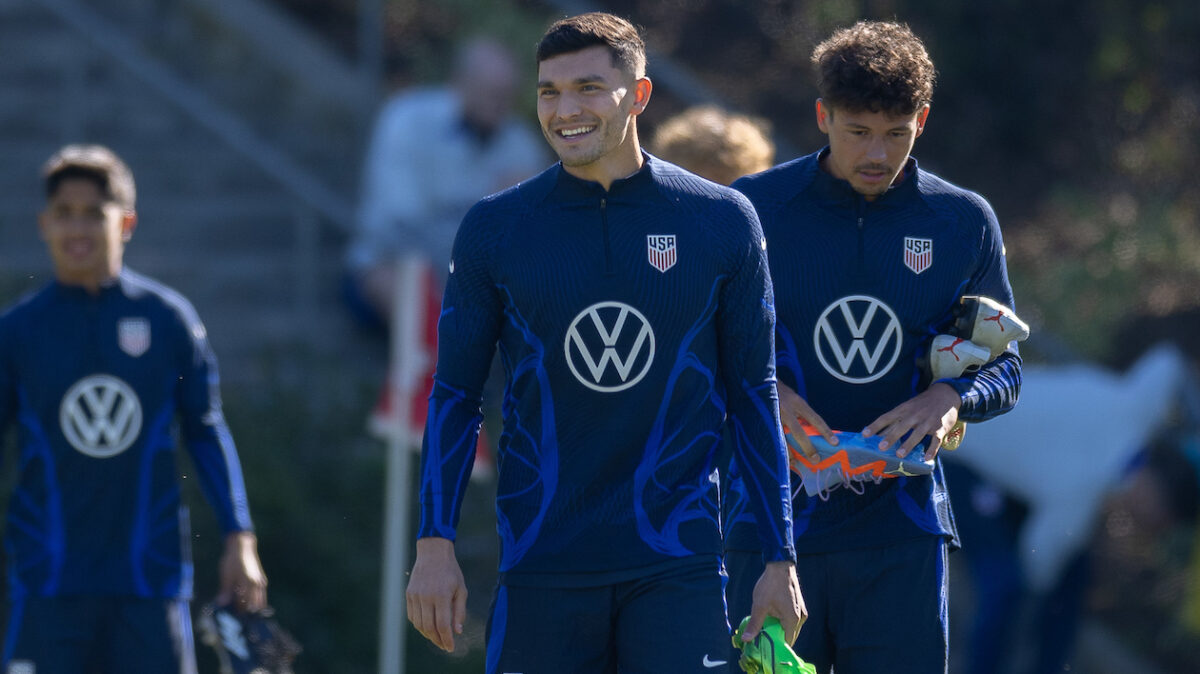 Brandon Vazquez’s rapid rise with FC Cincinnati not only helped the club improve within MLS in 2022, but also rewarded the striker with his first international call-up. Now, with the U.S. men’s national team’s two friendlies upcoming against Serbia and Colombia, Vazquez is aiming to set the tone for a successful 2023 for club and country.

Vazquez is one of 13 players fighting to earn their first senior caps over the next week, while also sparking his chances for future involvement this year. The former MLS Cup winner is coming off a career-best season for FC Cincinnati where he scored 18 goals and registered eight assists, leading FC Cincy to a first-ever playoff berth.

After delivering a sensational club campaign in 2022, Vazquez is eager for the chance to prove himself with the USMNT and continue the team grow towards its competitive schedule.

“The only thing that I’m focused on right now is doing my best for the team, helping the team win and scoring as many goals as possible,” Vazquez said Monday in a press conference with reporters. “I think if I step onto the field and do my job here, then the rest will come.

“We’re trying to push ourselves to be the best team possible and the vibe in the locker room is great, it’s a great group of guys and everybody gets along really well,” he added. “So every time you step on the field, the team chemistry is really there even though we have a lot of new faces, it’s like everybody has been watching the U.S. national team and knows exactly their style of playing. We’re stepping in and doing exactly that.”

Not only has Vazquez’s stellar work in front of goal helped spark his club career, but also his versatility playing in a number of different roles. Vazquez has past experience with FC Cincy playing as a long striker before Pat Noonan gelled Vazquez and Brenner together during the 2022 campaign.

There is no determination on how Anthony Hudson will lineup his squad against Serbia at Banc of California Stadium, but Vazquez is ready for whatever comes his way on Wednesday.

“Before Pat Noonan came in, we were playing also with a single striker,” Vazquez said. “It’s the same kind of job that I have to do every time I step on the field, and yeah it’s covering more ground then when you’re playing with two strikers, but I feel very accustomed to playing by myself up top, just the way I feel like when I’m playing two forwards.”

Vazquez arrived at USMNT camp after two weeks of FC Cincinnati preseason training, getting an early start to his 2023 schedule. The Eastern Conference club is roughly one month away from kicking off its competitive schedule in MLS, aiming to take the next step forward after a historic year.

While his long-term goal remains focused on FC Cincy, a strong USMNT camp could play a major role for Vazquez in achieving everything he wants to this year.

“The opportunities like this personally gives me confidence,” Vazquez said. “Then it’s about going back to Cincinnati and I think it’ll be like I never left. I’m really close to everybody back in Cincinnati and the team and I think everybody will be excited to have me back.”