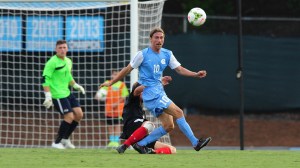 MLS has come to terms with four more potential draft picks ahead of the MLS draft.

Craven will head into his professional career fresh off a season that saw the North Carolina star named as a MAC Hermann Trophy finalist. The Tarheel forward tied for the nation’s lead with 15 goals last season while also contributing five assists.

Hallisey, a Hermann Trophy semifinalist, finished with nine goals to go with 15 assists in 2014 and was named to the NSCAA All-America Second Team.

Abdul-Salaam contributed three goals and 12 assists in a three-year career with the Zips, while Barrett finished with a team-leading six goals in just 13 games played in 2014.

What do you think of the league’s latest crop of collegiate signings? Where do you see these four landing on draft day?

DeAndre Yedlin was linked with several reported moves away from Newcastle United this summer, but looks to be staying in England for the first half of the season. Steve Bruce named his 25-player roster (…)

Berhalter: "USMNT can shock the world at 2026 World Cup"

The U.S. Men’s National Team may be aiming to get back to the FIFA World Cup in 2022, but already has one eye set on hosting the international competition on home soil in 2016. It will be the second (…)

Manchester United saw its lead slip away early in the second-half against Paris Saint-Germain, but the Red Devils stayed in the fight to earn an important three points from Paris. Marcus Rashford’s strike in (…)

There were not many positives for Borussia Dortmund in its UEFA Champions League opener, but Gio Reyna was involved in one of them. Reyna set up Borussia Dortmund’s lone goal in a 3-1 road loss to Lazio (…)

Ethan Horvath returned to the Club Brugge starting lineup on Tuesday in UEFA Champions League play and picked up his first win since August 2019 in the process. Horvath filled in for Simon Mignolet who remains (…)