Don't rule out a Toronto FC designated player just yet

Don't rule out a Toronto FC designated player just yet 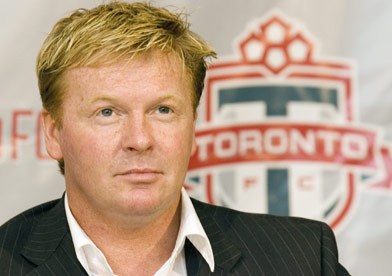 Given Toronto FC’s rampant success at the box office you might think the young club would be looking to hold off on using its designated player slot. Think again.

Toronto FC isn’t ruling out using the DP slot in 2008, according to head coach Mo Johnston. Reports out of Canada suggest the club was going to sit on the slot this year but Johnston insists he has the go-ahead to land a marquee player if the team finds one this off-season.

"We can use a DP if we want to," Johnston said. "The board here has backed what we’re doing and if that’s something we’re ready to do, you’ll see it.

"We’re looking at player and have been for a while and if we find the right player, someone who can make a real impact like a Juan Pablo Angel, then we will do it."

Johnston acknowledged that Toronto FC has been approached by at least two teams aboout trading its DP slot. The Scottish legend wouldn’t rule out the possibility of dealing the slot if the right deal came along.

"If it was for the right guy, I would seriously consider it," Johnston said.