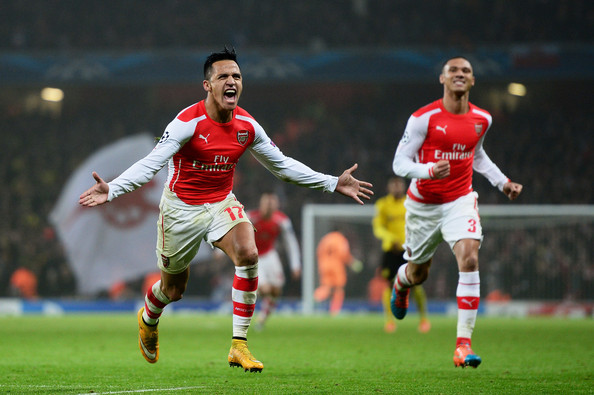 Arsenal answered critics and did a favor for its London rivals with a vital result against Manchester City.

The Gunners employed a near-perfect tactical performance in a 2-0 victory against Manchester City at the Etihad Stadium, the same place they suffered a devastating defeat last season. This time around, Arsenal operated more responsibly and allowed just four shots on goal for the Citizens.

Things began to look bad for Man City midway through the first half when the now healthy Vincent Kompany brought down Nacho Monreal just inside the penalty area. Santi Cazorla dispatched the penalty kick for a 1-0 Arsenal lead.

Olivier Giroud doubled the lead in the 67th minute from a Cazorla free kick. The Frenchman lost his marker and put a glancing header past Joe Hart.

Man City dominated possession but was unable to find that penetrating pass to create a good chance. The visitors, meanwhile, took advantage of their seven shots to climb to fifth in the English Premier League standings. The gap between City and first-place Chelsea now stands at five points.

In Spain, Cristiano Ronaldo scored twice to help Real Madrid in a 3-0 win against Getafe. AC Milan lost to Atalanta at home in Serie A action, and Paris St. Germain recorded their first win in four Ligue 1 matches.

Here is a rundown of the rest of Sunday’s action in Europe:

Another London-based team, West Ham, also had an enjoyable Sunday, with a 3-0 win against Hull City.

The Hammers scored all of their goals in the second half to climb four points behind Manchester United in fourth. With four losses in their last six games, Hull City now sit inside the relegation zone.

Andy Carroll opened the scoring four minutes after halftime. Hull goalkeeper Allan McGregor deflected Enner Valencia’s strike into the middle of the goal area where Carroll bounced for his fifth goal of the season.

Three minutes after entering the game for Mark Noble, Morgan Amalfitano scored West Ham’s second off a cross from Valencia. Stewart Downing’s strike in the 72nd minute completed an afternoon of misery for Hull.

Any alleged disagreement between Cristiano Ronaldo and Gareth Bale didn’t stop the pair from leading Real Madrid to a 3-0 victory against Getafe.

The Spanish league leaders put nine shots on target and allowed zero in the dominant performance. The win keeps Real in first place.

Ronaldo opened the scoring just after the hour-mark when Karim Benzema found him open in the box. That opened the floodgates as Bale struck four minutes later from a James Rodriguez cross.

James also provided the third, crossing a ball right onto the head of Ronaldo to seal the win. Real have now recorded two consecutive 3-0 wins in La Liga since opening 2015 with a loss.

Rivals Atletico Madrid had a similarly easy time in a 2-0 victory against Granada. Mario Mandzukic scored his seventh league goal of the season on a penalty kick before Raul Garcia struck with two minutes remaining.

The new year so far hasn’t been kind to AC Milan.

The Rossoneri have failed to win in three league games after a 1-0 loss to Atalanta at the San Siro. Maxi Moralez had all the time in the world to pick out striker German Denis for the 33rd-minute winning goal.

Despite Milan possessing the ball more, Atalanta did slightly better with their opportunities to put six shots on target. Milan now sits in eighth, five points behind a Europa League spot, while Atalanta climbed out of the relegation zone with the victory.

Here is a rundown of Sunday’s results in Serie A:

Just over an hour into PSG’s match against Evian, it looked too familiar for fans inside the Parc des Princes.

A Gregory van der Wiel own goal had tied things up 2-2 and the Parisians were heading for another missed opportunity. This time, two goals inside the final 16 minutes gave them a 4-2 win and their first taste of victory since Dec. 6.

The own goal made for a tense second half until Lucas Moura set up Javier Pastore’s 74th-minute winner, and Edinson Cavani added the insurance goal with a minute remaining.