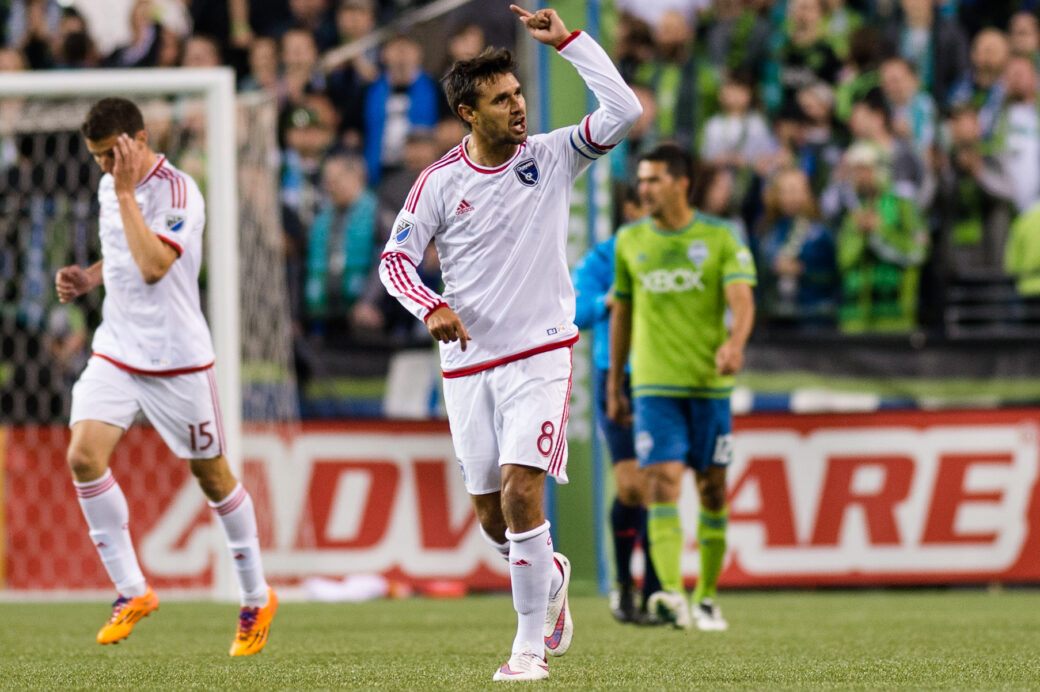 Winless in their last 16 games, a trip to the Emerald City didn’t seem the most likely setting for the San Jose Earthquakes to break a nearly 500-minute scoreless streak. Especially after giving up a goal less than 30 seconds into the match.

Cue an old standby and a shiny new toy.

The Earthquakes rode a brace from club icon Chris Wondolowski and an insurance goal from Innocent Emeghara, the club’s newest Designated Player, to a stunning 3-2 upset over the Seattle Sounders in front of 39,175 at CenturyLink Field on Saturday.

Wondolowski broke a 1-1 tie in the 48th minute, stepping into a loose ball in the penalty area and wasting no time burying a shot past goalkeeper Stefan Frei for the 2-1 lead and his second goal of the night. Brad Evans, playing just his second match since moving to center back, whiffed a back-header to Frei, leaving the ball at Wondolowski’s feet for the open look.

The Earthquakes went to 10 men in the 53rd minute when referee Baldomero Toledo issued a red card to Victor Bernardez for a rough tackle. Despite going down a man, San Jose found an insurance goal in the 70th minute through Emeghara. The Nigerian midfielder worked a crisp give-and-go with Adam Jahn, cut back on Evans after receiving the return pass, and easily beat Frei for the 3-1 lead.

With a man advantage, the Sounders nearly equalized multiple times in a flurry of attacks around the hour-mark. Dempsey sent a close-range header off Bingham’s thigh. Moments later Leo Gonzalez forced a Bingham save with a long-distance rocket. Finally, Dempsey narrowly missed connecting at the far post with a low driven cross from Lamar Neagle.

Obafemi Martins finally managed to pull the Sounders within 3-2 in the 84th minute, tapping in a short cross from late substitute Andy Rose. Marco Pappa forced Bingham into a diving save with a long-range shot just a minute later. Despite earning five more corner kicks, Pappa’s shot was a close as the Sounders came to equalizing.

San Jose entered the match scoreless in 484 minutes, and had not won on the road since May 2014.

Dempsey opened the scoring in just the 18th second, capping a frenzied Sounders’ opening by heading in a rebound off goalkeeper David Bingham. Defender Tyrone Mears sent in the initial shot from distance, a rocket that deflected off Bingham for Dempsey’s third goal in two games.

But despite the bright start, the Sounders — who looked razor sharp in running the New England Revolution off the field last week — struggled with sloppiness on both ends of the pitch, slipping, tripping, and sending simple passes rolling out of bounds.

Minutes after whipping a header off the crossbar, Wondolowski equalized from the penalty spot in the 13th minute, finding himself wide open on the end of a Marvell Wynne cross.

San Jose nearly went ahead twice in the first half. Emeghara got on the end of a cross in 38th minute, but sent a glancing header well past the far post. In first-half stoppage time, Matias Perez Garcia wove through a gaggle of Sounders to create space for himself in the box, but sent a left-footed shot past the left post.

The Sounders were without head coach Sigi Schmid, who missed the game to attend his eldest son’s wedding. Assistant Brian Schmetzer filled in for Schmid, falling to 2-1 as Schmid’s substitute.

The Earthquakes are back in action next weekend, opening their new home, Avaya Stadium, against the Chicago Fire. The Sounders host Club Tijuana of Liga MX in a friendly on March 24 before returning to league play on the road against FC Dallas on March 28.