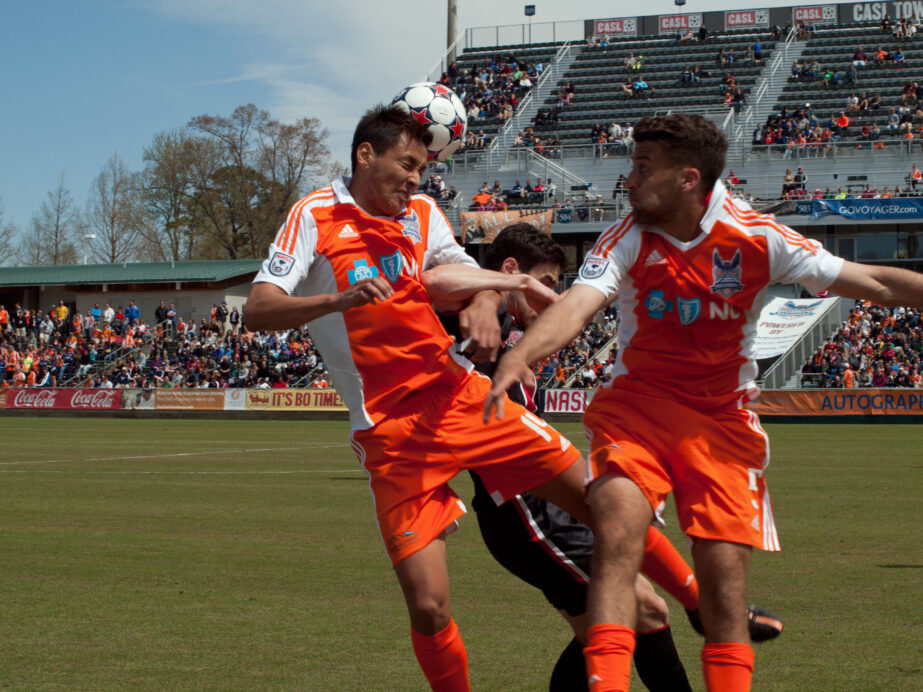 Cary, N.C. – The opening game of the 2015 NASL Spring Season had plenty of fireworks as the Carolina RailHawks cruised to a 3-1 win over Ottawa Fury FC, but not without some controversy.

Goals from forwards Tiyi Shipalane, Nacho Novo and Simone Bracalello gave the Cary side all three points in their first match of the season. The late goal from the Italian forward caused quite a stir, leading to a red card for Fury FC midfielder Julian de Guzman with minutes to play.

“You’re going to think it’s funny when you watch the goal,” Fury FC head coach Marcos Dos Santos said after the match. “Julian gets his shirt taken off almost, and it leads to a counterattack where Carolina scores.”

Trailing by two goals for most of the game, Brandon Poltronieri pulled one back in the 84th minute after a good cross in from Paulo Junior. The goal gave Fury FC hope of an equalizer, but Carolina’s late goal sealed the deal.

“It looked like the players thought there was a foul, but as you tell your eight-year-olds, you play the whistle,” RailHawks head coach Colin Clarke told reporters. “Whether there was or not, the ref didn’t blow the whistle, until it’s blown you’ve got to keep playing.”

Shipalane claimed the first goal of the 2015 NASL Spring Season with a cross that sailed with the wind past Fury FC goalkeeper Romuald Peiser and into the net.

A crazy sequence of events saw two penalties called in quick succession later in the first half. Former Toronto FC player Andrew Wiedeman was taken down inside the penalty box, but Carl Haworth could not convert the penalty as Hunter Gilstrap correctly dove to his left to smother the chance.

Moments later, Nacho Novo combined with Shipalane, who was taken down near the penalty area. Novo stepped up and coolly slotted it past Peiser, giving the RailHawks all of the momentum for the time being.

Carolina took the 2-0 lead into halftime, but Ottawa rebounded in the second half, creating a handful of chances in the first few minutes. The Fury finally capitalized on their change in attitude when Poltronieri blasted a header past Gilstrap.

“Second half, great reaction from our guys,” Dos Santos said after the game at WakeMed Soccer Park. “We dominated a big part of the second half, created good opportunities, finally scored. We had energy, we felt we had energy maybe to tie the game, but it’s too bad that that happens. It’s not Carolina’s fault.”

Meanwhile, Shipalane, who combined well all day with Novo, said the partnership had been building in the offseason. The results of their work showed in the first half as each scored a goal and created a flurry of other chances to add to the scoreline.

“That’s one of a few new good partnerships we’ve got,” Clarke said. “Like I said, ‘Nacho,’ we’ve seen a little bit of him last year, and I think the crowd got excited about that, and he’s been here now for all preseason, last year. He’s a top-class player. You look at him, he’s 35-years-of-age, he probably worked as hard as anybody out there.”

Novo had to be subbed off in the 72nd minute, but Clarke said he knew the forward wouldn’t last the whole game because of a knock he had picked up before. Clarke said he hopes Novo will be fine before the next game.

The RailHawks will take the three points and head to Canada, as they are set to meet FC Edmonton next Saturday. Ottawa will head further south to take on the Atlanta Silverbacks on Saturday, as well.