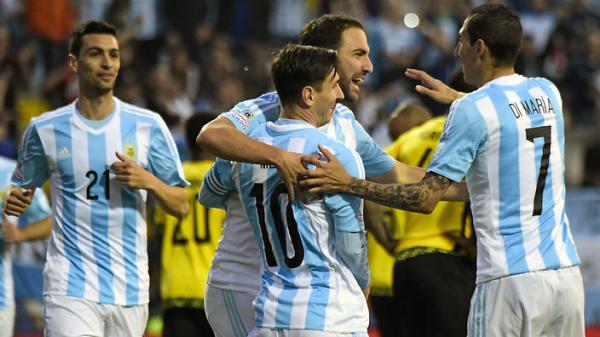 Colombia did just enough to emerge from the Copa America group stages, earning a star-studded matchup with a team that still appears to be the tournament’s favorite.

Argentina is set to take on Colombia on Friday night, pitting two of South America’s biggest powers against one another with a spot in the semifinals on the line.

Led by an attacking unit amongst the most fearsome in the world, Argentina cruised through the group stages unbeaten claiming seven points from three games. However, despite boasting a strikeforce led by Lionel Messi, Gonzalo Higuain and Sergio Aguero, Argentina only scored four times in the three group stage matchups, one of which came from the penalty spot.

Argentina’s biggest opponent in the group stages appeared to be the team’s own reputation, as all three of the Albiceleste’s opponents bunkered in in anticipation of wave after wave or Argentina attack, something Colombia will not be expected to do given their own prowess.

The Colombians limped through the tournament’s group stage, despite having one of the deeper rosters in the tournament. Featuring stars James Rodriguez, Radamel Falcao and Juan Cuadrado, the World Cup quarterfinalists mustered just four points in a trio of games that included a loss to Venezuela.

Like Argentina, Colombia’s biggest issue in the group stage was the team’s vaunted attack, scoring just once through three games. The defense, meanwhile, which features two attack-minded centerbacks in Juan Camilo Zuniga and Pablo Armero, proved to be among the best in the tournament thus far, allowing just one finish of their own.

Facing off with Argentina’s attacking unit is a whole new animal, though, but Colombia’s attack could once again be stifled by an Argentina defense that has typically been the team’s achilles heel.

This year, the backline has proven sturdy as the World Cup runners-up have finally found a reliable centerback duo in the form of Ezequiel Garay and Nicholas Otamendi. With Javier Mascherano once again playing the role of a midfield destroyer, Argentina finally match their ability to go forward with their ability to track back, making Messi and co. even more dangerous.

For Colombia to have a chance, it will come down to the forward unit being clinical in the final third. Rodriguez and Cuadrado can and will both create chances, but those chances need to be converted to goals. With three forward options in Falcao, Jackson Martinez and Teo Gutierrez, someone will need to step up and provide the goals necessary to go head-to-head with one of the world’s top teams.

If not, look for Argentina to create plenty of chances through their front three, a group that should be good enough to lead the team to the semifinals an beyond.