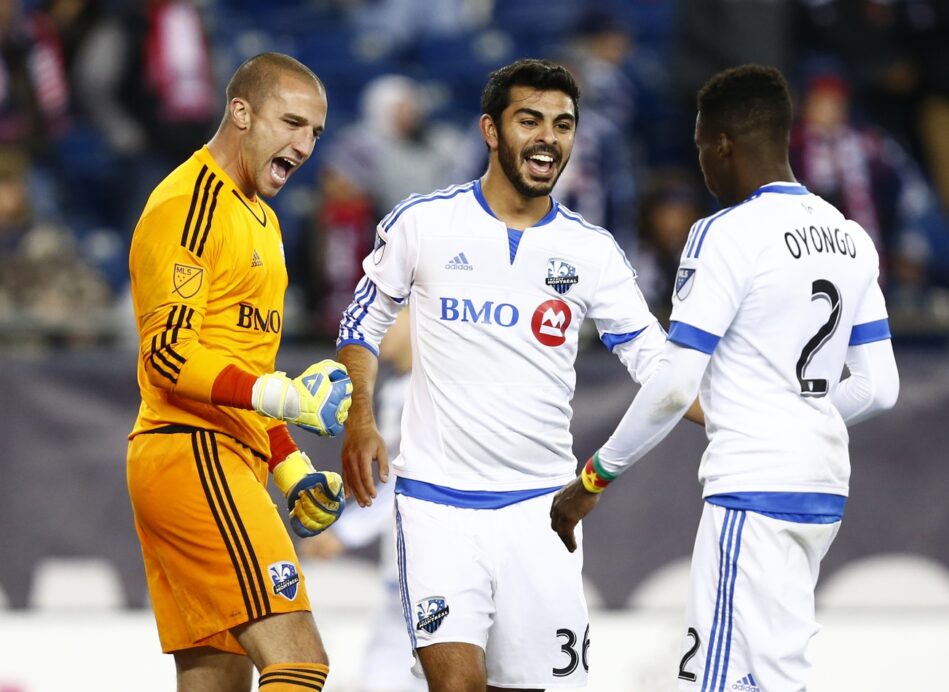 FOXBOROUGH, Mass. — The New England Revolution and Montreal Impact are both virtual locks to reach the MLS playoffs entering the weekend, but only one could seal a postseason berth on Saturday night at Gillette Stadium.

Ignacio Piatti’s long run from midfield to score in the 55th minute proved to be enough as the Impact downed the Revs for the second time in a month, 1-0, in front of a club record crowd of 42,947.

“Obviously, we wanted to stay compact,” Impact coach Mauro Biello said. “We didn’t want to give the key players space and time on the ball and I think they had a bit more of the ball than we did, but in the end we held on. They didn’t get in behind us. They had some shots from outside and we got that magical goal by Piatti.”

Piatti did it all himself, taking possession just across midfield and eluding a host of Revolution defenders. The Argentinian attacker weathered a London Woodberry tackle, spun away from Jermaine Jones and then held off Scott Caldwell as he worked to the edge of the box.

Piatti’s shot threaded the needle as he looped it left to right over the head of Bobby Shuttleworth (4 saves) and under the crossbar.

“We were on his heels, we were there and we probably should have taken a foul,” Revs coach Jay Heaps said. “I think we were playing it way too straight up. I’d like to see us sense that a guy like Piatti, if he got a little bit more space, was going to be dangerous.”

The Impact (14-13-6) jumped over the Revs into fifth place in the Eastern Conference and made their playoff spot official. Montreal has six wins its last 10 games, a run that has largely coincided with the addition of Didier Drogba.

The Revolution (13-12-8) have gone in the opposite direction after appearing likely to challenge for the best record in MLS as recently as September. The Revs have gone winless in their last four games (0-3-1); in all four they could have clinched a playoff spot with a win.

With one game left in the regular season, the Revs (47 points) are still almost certain to make the playoffs, given that its only challenger, Orlando City SC (44 points) trails the Revs in goal differential by nine.

The hosts nearly scored in the 10th minute off a Chris Tierney free kick, but Jermaine Jones’ goal was waved off after he was ruled offside.

Lee Nguyen had the Revolution’s only two official shots on goal. He sent a low shot at goalkeeper Evan Bush in the 22nd minute off a cutback pass from Juan Agudelo, while he forced Bush into a diving save in the 57th minute, just two minutes after Piatti’s winner.

“Some of our usual, really good one-two touch passing was just a little bit off,” Heaps said. “Usually when that’s happening, if it connects, that’s when teams have to take a step further back and not be so strong on their blocks… That combination play that unsettles teams, that wasn’t as good as it needed to be.”

Montreal will host Toronto FC at 5 p.m. next Sunday in its regular season finale, while New England plays away against New York City FC at the same start time.