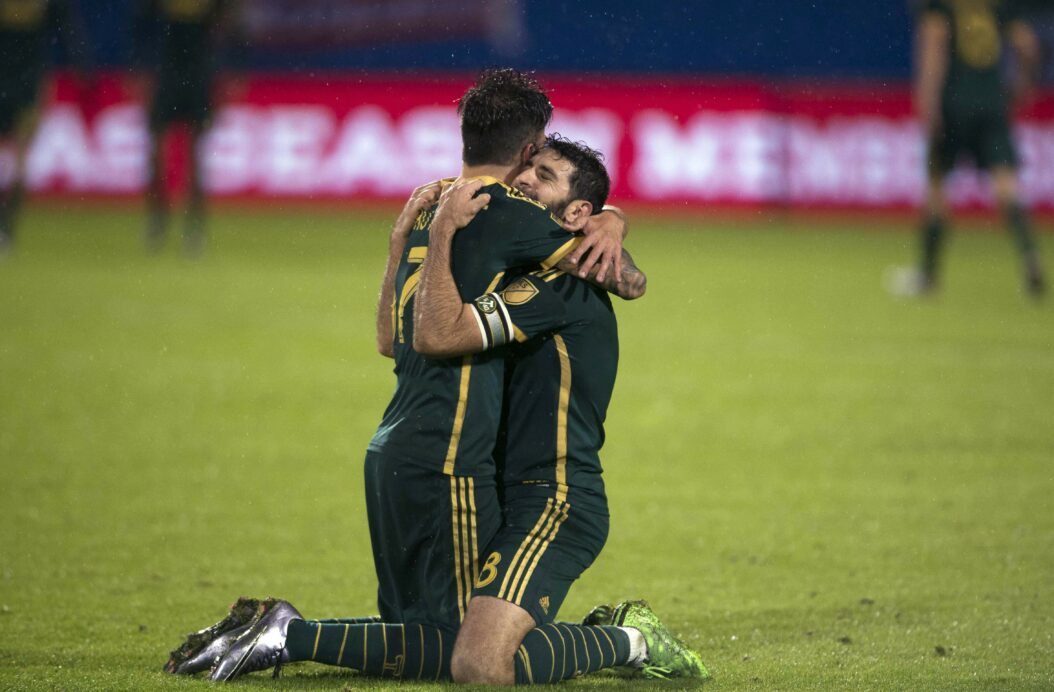 The Portland Timbers claimed their first-ever MLS trophy on Sunday, and while that should have been a cause for unending celebration, the ultimate prize is still up for grabs.

And they know it.

The Timbers traveled to Frisco, Texas, for the second leg of the Western Conference Finals, and came away victorious. FC Dallas mounted a late comeback after Fanendo Adi scored the first goal of the evening, but the West’s best team during the regular season couldn’t finish its fight back.

While the ending proved to be nerve-wracking, substitute Lucas Melano sealed the victory with a stoppage-time finish, giving his side the 5-3 aggregate win. Celebration ensued on the field as the Western Conference trophy was lifted by star midfielder Diego Valeri and more, but following the ceremony, the players and coaches were ready to look ahead to the MLS Cup.

“It wasn’t the way we scripted it, but the maturity we showed after we gave up the two goals, to not give up the third, and then to score the one to put it away was a really good testament to how far we’ve come as a club,” Caleb Porter said following the win. “This is a great moment for this club. It’s our first trophy, but we want the biggest trophy and we have one more game still to achieve that.”

Four goals were scored in total on Sunday, but arguably the most deciding play of the game was made by centerback Nate Borchers. FC Dallas substitute Blas Perez had just scored with his head, and he found himself in open space with the ball at his feet. The comeback was almost complete, all Perez had to do was fire a shot into the back of the net. Out of seemingly nowhere, though, Borchers flung himself in front of Perez and the ball ricocheted off his his leg and out of play.

“I’ve been in these games before and you stand on the sideline, make your moves in terms of subs and you know it’s out of your hands and you hope your players step up and make plays,” Porter said of Borchers’ stop. “When you have good players, they do that. I really wasn’t all that nervous, to be honest with you, because I knew it was down to the players at that point and I also knew I had experienced guys, good players.”

FC Dallas had all of the momentum up until that moment, scoring twice to be within only one goal from forcing extra time. Borchers’ play kept the Timbers in the lead, and minutes later, Melano capped off the night with another road goal.

“We came in believing it was going to be a tough one,” goal-scorer Adi said. “Dallas was going to give us a tough one, and they did. We’re not surprised with what they came with, because we expected them to come very strong. For us, it was to try and get a goal and push forward. When we got the second goal we knew it put us in the Cup.”

Now, the final test awaits. The Timbers must go on the road, just like they did on Sunday, and produce a result against a high-flying attack-minded side in the Columbus Crew. Borchers said following the celebration that this side has consistently had its back against the wall, but has pulled through with result after result. The head coach expects nothing less once again come Dec. 6 at MAPFRE Stadium in Columbus, Ohio.