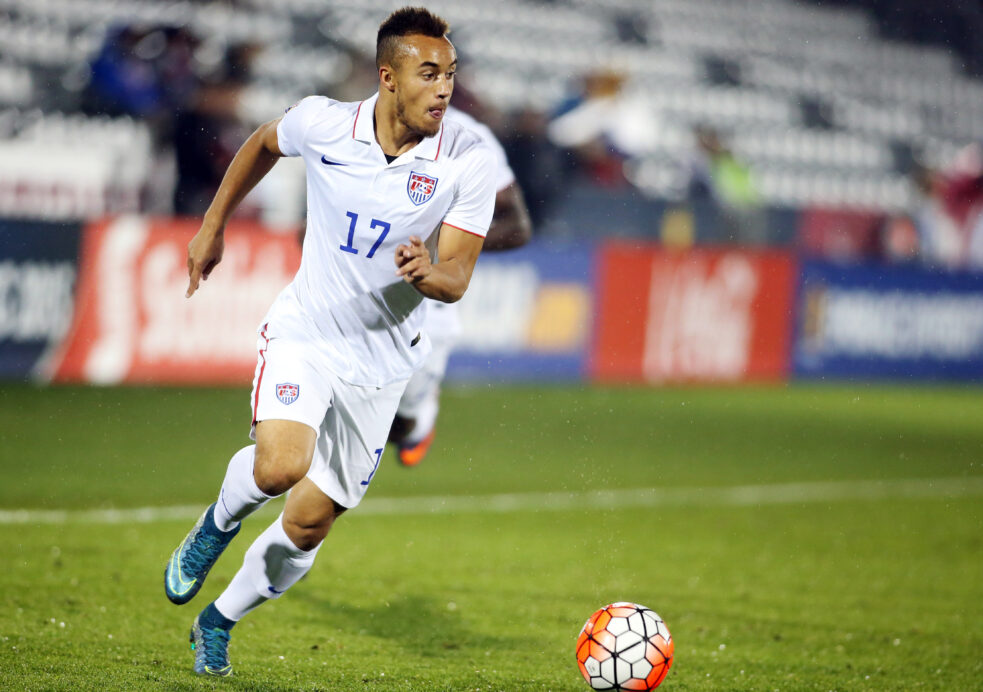 On the outside, Jerome Kiesewetter was as composed as ever, directing cross after cross into the box while repeatedly besting his defender down the wing in his U.S. Men’s National Team debut. But on the inside? “Goosbumps”.

Kiesewetter was one of several U.S. Under-23 Men’s National Team regulars to make the jump to the senior team in Sunday’s 3-2 victory over Iceland. Alongside fellow Olympic team regulars Jordan Morris and Kellyn Acosta, Kieswetter was a standout in a lineup that was primarily filled with senior team veterans looking to get into shape ahead of a long MLS season.

Given just 25 minutes to work, the 22-year-old Stuttgart forward asserted himself among the more dangerous USMNT options on the field while easing into what proved to be a memorable moment for the young attacker.

“I felt pretty good. The first cross, I think Darlington (Nagbe) almost scored. After that, I was like ‘okay, we have a chance today. We can still win this,'” Kieswetter said. “Every second after, I thought it was getting better and better and better. I was just trying to help my team win the game.

“It was a great feeling. It was just goosebumps. It was amazing to represent my country.”

While Kiesewetter proved menacing throughout his short run out, the moment that was likely his best came on the game’s pivotal goal. Darting down the right side, Kiesewetter was hacked down just outside the box, allowing Michael Bradley to bend his free kick onto Steve Birnbaum’s head for the stoppage time game-winner.

Routinely dangerous both on the ball and with his crosses, Kiesewetter earned the praises of his teammates, as well as his head coach, a former Stuttgart forward himself.

Kieswetter says his message from Jurgen Klinsmann was a simple one: to enjoy the moment, play his best and make things happen. According to Klinsmann, Kissewetter did all of that and more while making quite the impression in his first USMNT action.

“I think the beauty of January camp is to have younger players with us that you just envision down the road being a part of the senior team,” Klinsmann said. “I think Jerome Kiesewetter is a young player that fights his way through the German system playing for the second team at Stuttgart in the third division, basically, but with tremendous talent. In the beginning, he was a little bit overwhelmed. ‘Oh my gosh. I’m with the senior guys!’ One step at a time, he kind of settled and was calm on the ball and more relaxed. He came in for 20 minutes, and this is not enough time to think too much, so I think that helped him.

“It was just a simple message: go in there and go. Go at people one against one, which is his huge strength. He’s very fast and we wanted him to just try and create simple situations and he had three crosses where almost two ended up as goals. This is a wonderful introduction to the senior level.”

Making the transition a bit easier for Kieswetter was the presence of friend and fellow U-23 star Morris, who the winger says he has developed great chemistry with. Disappointed that he couldn’t create a goal with his fellow Olympic hopeful, Kiesewetter’s partnership with Morris continues to develop as the two push towards regular spots on the senior team.

Klinsmann says that the next step for Kiesewetter is to continue to learn and grow, which is something that the head coach says the 22-year-old has done throughout camp. Given the ability to pick the brain of USMNT regulars, Kieswetter and the current crop of Olympic players have had the benefit of an introduction to the senior team and the level of play that comes with it.

But before the group of U-23s can focus on making the leap to the senior team, the priority remains on the looming Olympic playoff. Two matches against Colombia are set to determine whether or not the U.S. will find itself in Rio this summer, and players like Kiesewetter are expected to play a major part in that push in the aftermath of a senior level learning experience.

“I think it will help us because we’re playing with veterans. They’ve all achieved a lot,” Kiesewetter said. “They’ve played hundreds of games and it’s competing at the highest level. Of course you get better every day when you get to play against the best players here in this country.”

“He’s great. He’s not scared,” USMNT midfielder Lee Nguyen said of the youngster. “He gets the ball and he goes right at you. He wants to attack, wants to score. It’s good to see that kind of confidence in a guy like that.”