Nigel de Jong planning to let his play do the talking

Nigel de Jong planning to let his play do the talking 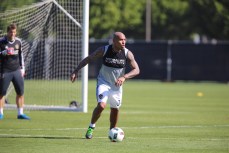 Of all the players in MLS, Nigel de Jong is certainly among those with a negative reputation. His physical play is seen by some observers as overly aggressive, and there are still those who refuse to forgive him for injuring Stuart Holden more than half-a-decade ago.

All of that makes little difference to de Jong, who is determined to let his play with the LA Galaxy do the talking.

The Galaxy made a flurry of moves for veteran players this offseason, and one of the most recent was the addition of de Jong. The Dutch international joined the club after departing Italian giant AC Milan, and is expected to bring a tough-as-nails style of play to complement the likes of Steven Gerrard and Sebastian Lletget in the Galaxy midfield.

De Jong’s tenacity and fierce competitiveness may be a boost for the Galaxy as they look to win a sixth MLS Cup in 2016, but are traits that have earned him his share of detractors over the years. Even his arrival to the league was greeted with negativity and criticism despite his accomplished career abroad, and that ill will is likely to remain for at least the opening months of the season.

Not that de Jong minds all that much.

“If you know me a little bit more, I don’t really care what people say,” said de Jong at his introductory press conference on Tuesday. “It’s not about the reputation that does it, it’s about the winner’s mentality that you have to show on the pitch, because at the end of the day it’s about winning and getting those three points in your pocket and leave the pitch with that.

“For me, that’s not a problem. It’s never been a problem in my career. I’m 31 now, so I think I’ve got a lot of experience knowing that. The best thing for me to do is just be on the pitch. I’m not really a talker outside the pitch. I do my best on the pitch, I let my feet speak, and I do the best that I can do for this team.”

A defensive midfielder known for his tackling and toughness, de Jong surprised few observers on Tuesday when he said he was a fan of the NFL. His qualities should help the Galaxy make up for the loss of the departed Juninho while freeing up Steven Gerrard a bit more, and might just give the club the type of balance it needs to once again make a deep playoff run.

It is not just the physicality that de Jong is expected to bring to the Galaxy, though. He is also being counted on to help groom the club’s younger players, and guide them through the rigorous MLS campaign.

“I think Nigel’s experience and his leadership will be tremendous for our young players,” said Galaxy head coach Bruce Arena. “We see that already and obviously with Nigel and Robbie Keane, Stevie Gerrard, Jelle van Damme, Dan Kennedy, Ashley Cole, we have experienced players that are now having a great influence on our young players. I think our locker room is in great shape. They step out on the field, they train the right way, and we’re hopeful on game days the same attitude is going to be there.

“I think we have strong leadership with our club this year and I think obviously we’re going to ask Nigel to be a strong leader as well.”

So far, de Jong has made a strong impression. His teammates have talked positively about what he has shown in training, and de Jong also drew positive reviews after playing in his first preseason match with the Galaxy in Las Vegas, Nevada, this past weekend.

Still, he is getting used to his new club, teammates, and league, and knows there is plenty of room to grow before the season gets underway in less than a month.

“The level of the game is different, it’s a little bit lower, but I think we can improve as a team,” said de Jong. “You can see that also during the training sessions. There’s a lot of players that came new to the team. I think we are like nine new players, 10 new players, so we all have to adapt to each other. This is why it’s good that we are already in this preseason, training with each other and playing these early games.

“Of course, the level of Europe is high but that doesn’t (mean) that you don’t want to win. For me, that’s not a problem at all. We have to go on the pitch no matter which level it is. I think with the experienced players coming in, I think it’s a good thing that we can raise the bar also for the guys that are coming up and see what kind of level it is to play in Europe if they ever want to go out there and play in Europe.”

Gio Reyna didn’t have a major role for Borussia Dortmund in Thursday’s German Cup Final, but got to celebrate his first trophy as a European player. Reyna made a late cameo off the bench as Edin Terzic’s side (…)

The U.S. Men’s National Team still has the Concacaf Nations League Final Four to look forward to in June, but Gregg Berhalter’s side now knows where it will play its July Gold Cup group stage matches at. (…)

Geoff Cameron has become the latest American player to return to the United States, signing with Eastern Conference MLS side FC Cincinnati on Thursday. FC Cincy announced the signing of the 35-year-old to a (…)

FORT LAUDERDALE, Fla. — Wil Trapp said it best after leaving Inter Miami this past winter. This group is a collection of individuals. Inter Miami suffered its second loss of the year on Wednesday night (…)

The MLS Players Union released the salaries of every player in the league on Thursday, with Los Angeles-based stars Carlos Vela and Javier ‘Chicharito’ Hernandez headlining the list. Inter Miami FC (…)

FORT LAUDERDALE, Fla. — Unacceptable. That is the word Inter Miami repeated early on Thursday morning to describe the performance put forth in a “bitterly disappointing” defeat that served as a “reality (…)

Paul Arriola hasn’t dressed in a competitive match for D.C. United in more than six months, but could be back in action for the MLS club on Thursday after a long wait on the sidelines. Arriola is set to (…)