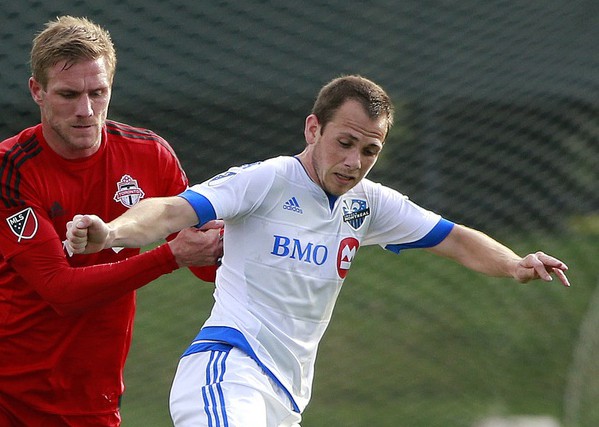 Following his emotional exit from the Chicago Fire in the offseason, Harry Shipp turned in a remarkable performance for the Montreal Impact on opening day.

Shipp, who said he was almost brought to tears after receiving the news that he would no longer be a part of the Fire in 2016, assisted the Impact’s first goal of the season en route to helping his side earn a crucial three points vs. the Vancouver Whitecaps at BC Place on Sunday.

Starting in a 4-2-3-1 formation, the 24-year-old midfielder was tasked with being the outlet out wide on the left, while Ignacio Piatti played the No. 10 role just beneath forward Dominic Oduro. As the game progressed, it became clear that the Argentine attacker preferred working and combining with Shipp on the left than Lucas Ontivero on the right. With Piatti making runs on Shipp’s side, it was the third-year midfielder who slipped him a pass that led to the game’s opening goal.

Throughout the course of the 90 minutes, Piatti continued to favor working down the left wing, opening up opportunities for the U.S. midfielder to cut inside and either go for goal or play a teammate in behind. Piatti was, at times, unstoppable and beat multiple Whitecaps players on spectacular runs towards goal, but following the play behind him was Shipp. He and Piatti consistently challenged defenders down the left wing, and both players had their opportunities to grab a goal (:52 below).

While Shipp did not make a reputation for scoring double-digit goals in his two years with the Fire, he was one of the few on both the 2014 and 2015 teams who created opportunities each game. He assisted six goals in his rookie campaign and eight the following season, but those numbers could have been a lot higher if he had the right players — proven and consistent finishers — around him.

If Sunday is any indication, Piatti will be electrying to watch this season, and Shipp is likely to be right behind him contributing to multiple goals this campaign. Didier Drogba’s return to the lineup will certainly shake up the formation, but the Ivorian’s presence only gives Shipp another outlet.

The 24-year-old is not the quickest box-to-box midfielder, and has previously received criticism for not tracking back to help defensively, but he reads the game well and plays to his strengths. He excels when he has someone to combine with, and Piatti proved that on Sunday. Shipp offered a creative spark for the Fire the past two seasons, and his abilities to create and find open space with the ball or his body were on full display in the Impact’s 3-2 win.

The Fire, who lost to New York City FC in their home opener, had relatively no problems scoring goals. Yet, tougher opponents with better back lines await. Dutch midfielder John Goossens, who was brought in after Shipp was dealt to the Impact, did not play in that opening game. If he can come in and help the Fire continue to add to their goal count, then both parties will think of the Shipp deal as a good move by season’s end.

Taking only Week 1’s games into account, though, the Impact have to be thinking they’ve got the better end of their trade.