MLS Week 2: A Look Ahead 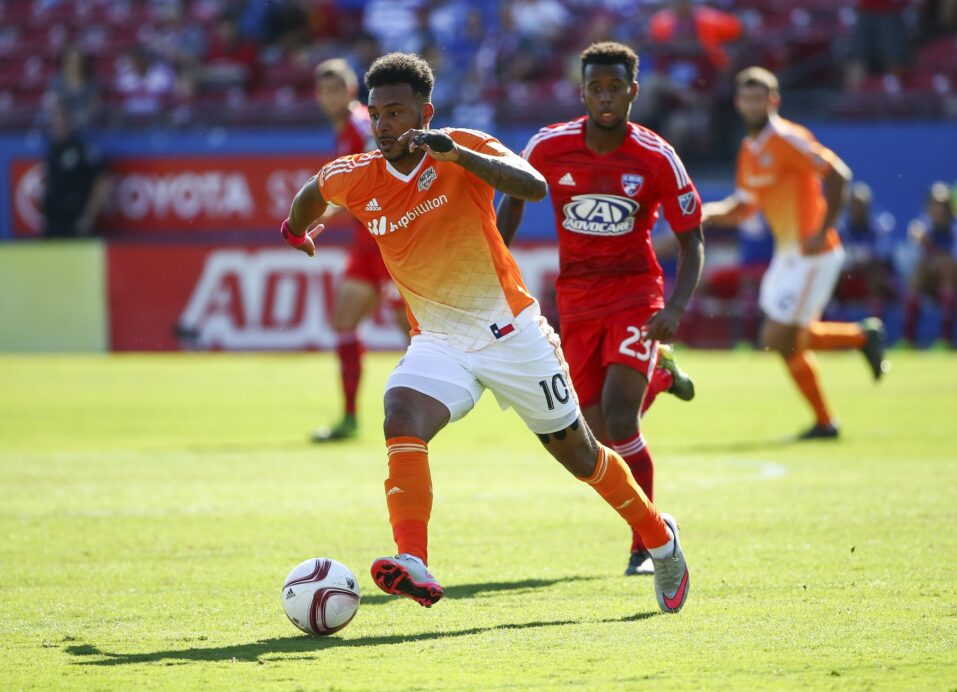 The second week of the MLS season brings one of the league’s fiercest rivalry matches as well as several clashes between 2015 postseason teams.

Headlining the action is the Texas Derby, as FC Dallas visits BBVA Compass Stadium to take on the Houston Dynamo. The status of FC Dallas star Fabian Castillo remains up in the air, but both sides will have plenty of attacking firepower after combining for five goals in Week 1.

The Eastern Conference is littered with clashes of postseason contenders, as the New England Revolution take on D.C. United in a playoff rematch. Elsewhere, the New York Red Bulls take on the Montreal Impact, while New York City FC hosts Sebastian Giovinco and Toronto FC in a rematch of one of last season’s most electrifying games.

In the West, the Vancouver Whitecaps look to bounce back in a meeting with Sporting Kansas City, while Real Salt Lake plays host to a Seattle Sounders team looking for their first point of the season.

Kaka is set to miss out for the second week in a row, but Orlando City could field its recent big money signing while looking for a second straight weekend of magic.

Following an electric 2-2 draw that saw the Lions snag a point with two stoppage-time goals, Orlando City could benefit from the introduction of Antonio Nocerino to the lineup. The Italian star, who joined from AC Milan in the offseason, could join a returning Christian Higuita following the expiration of his suspension.

The Chicago Fire could enter a bit shorthanded following a calf injury to star striker Gilberto. Following a thrilling 4-3 loss to NYCFC, the Fire will be looking to find some form of defense against last year’s rookie sensation, Cyle Larin.

After facing off in a heated playoff exchange last season, the New England Revolution and D.C. United are set to collide in Week 2 of MLS play.

Last season’s postseason clash, a D.C. United victory, was highlighted by the now-infamous Jermaine Jones incident that yielded a six-game suspension. Jones is now gone, but the stellar play of Diego Fagundez in Week 1 helped earn the Revs a 3- 3 draw with the Dynamo last time out.

D.C. United’s start to the season was much tougher. A 4-1 loss to the LA Galaxy has also produced several potential injury casualties, as Patrick Nyarko and Fabian Espindola are both questionable due to concussion symptoms and a hamstring strain, respectively.

Both Real Salt Lake and Seattle Sounders have undergone philosophy shifts in recent times, and the two teams will put their tactics to the test against one another on Saturday.

The two teams have both employed a 4-3-3 to start the season with varying successes. RSL benefited from spectacular performances from Juan Manuel ‘Burrito’ Martinez and Joao Plata despite settling for a 2-2 draw, while the Sounders were undone by a red card in a 1-0 loss to Sporting KC to start the season.

Defense will be an issue for the Sounders, who will enter Saturday’s action without Brad Evans. Look for Martinez, Plata and Yura Movsisyan to give the Sounders fits, while the Sounders look for Clint Dempsey to become a bit more involved higher up the field.

The Montreal Impact were among the more impressive teams in Week 1 of the MLS season, and the Canadian club will now look to keep that momentum rolling against the reigning Supporters’ Shield winners.

Riding a spectacular performance from Ignacio Piatti, the Impact knocked off the Vancouver Whitecaps, 3-2, to start the season. The flurry of goals came without Didier Drogba, who is once again set to miss out as the Impact play on the turf of the Olympic Stadium.

The New York Red Bulls travel to the Olympic Stadium following a loss to Toronto FC. For a majority of the game, the Red Bulls defense, led by newcomer Gideon Baah, looked up to the task before conceding two late goals. Alongside Baah, Canadian international Karl Ouimette will have to step in for Ronald Zubar, who is set to miss this weekend’s action with a one-game suspension.

Without Giovani Dos Santos, the LA Galaxy will be tasked with breaking down a Colorado Rapids defense that, at times, was among the best in the league in 2015.

The Mexican star was largely ineffective in the Galaxy’s opening week thrashing of D.C. United, but substitute Mike Magee proved to be the star of the show with a pair of goals, an assist and a penalty kick drawn. Joining Dos Santos on the injury list is goalkeeper Dan Kennedy, as Brian Rowe will have to step in behind the Galaxy’s retooled back line.

In an all too familiar performance, the Rapids allowed just one goal in last week’s loss to the Earthquakes. With Jermaine Jones waiting in the wings due to suspension, the Rapids are threatened with a slow start to the season with matches against five former playoff teams before the U.S. Men’s National Team midfielder’s arrival.

Both the Columbus Crew and Philadelphia Union will be looking for bounce-back performances after enduring difficult road defeats.

The Crew were knocked off in an MLS Cup rematch against the Timbers despite a spectacular finish from Federico Higuain. The Argentine playmaker should expect even more room to roam this weekend while attacking a Union team that will be without Maurice Edu for three months due to a leg fracture.

Joining Edu on the Union’s list of wounded is playmaker Tranquillo Barnetta, who looks set to miss out due to knee tendinitis. In his stead, the Union will need offseason signings Chris Pontius and Ilsinho to provide improved performances following a Week 1 defeat to Western Conference contenders FC Dallas. Aiding the Union’s cause will be the play of Andre Blake, who starred with eight saves in the team’s defeat to start the season.

After snagging three points against the Sounders, Sporting KC will look to add to their early-season points tally in a clash with another playoff contender in the Whitecaps.

A goal from an unlikely source in Nuno Andre Coelho led Sporting KC to a 1-0 win over the 10-man Sounders. The team’s attacking options look set to be bolstered as Brad Davis and Benny Feilhaber return to health, while Seth Sinovic could also feature from the fullback position.

The Whitecaps will enter Saturday a bit shorthanded following the suspension of Christian Bolanos. Following a defeat the saw the team give up an uncharacteristic three goals, the Whitecaps will need to get back to their roots in defense while relying on Kekutah Manneh to fill in for the suspended Bolanos on the attacking end.

The first Texas Derby of the season sees both the Houston Dynamo and FC Dallas enter on the heels of impressive attacking performances.

Although the team settled for a 3-3 draw, the Dynamo saw spectacular performances from offseason additions Cristian Maidana and Andrew Wenger. Fullbacks DaMarcus Beasley and Sheanon Williams are questionable, making the task a bit easier for Fabian Castillo if he can find a way to play following his recent adductor injury.

Even if Castillo is forced to miss out on the action, FC Dallas can rely on a strong attacking unit that should have scored more than twice against the Union last week. Offseason signing Maxi Urruti looked strong in adding a goal in his FC Dallas debut, while playmaker Mauro Diaz provided a pair of assists in his first effort of 2016.

Last season’s clash between New York City FC and Toronto FC at Yankee Stadium was among the most entertaining games of the season. Following impressive Week 1 performances, the two sides will look to replicate their goal-scoring form in Sunday’s meeting.

Both sides will see a star player hampered by a hamstring injury. NYCFC midfielder Frank Lampard remains questionable, while TFC forward Jozy Altidore is set to miss out on Sunday’s action.

The Portland Timbers haven’t lost in 10 games, and the reigning MLS Cup champions will look to extend that streak in a trip to Avaya Stadium.

In an MLS Cup rematch, the Timbers knocked off the Columbus Crew by a familiar 2-1 scoreline. Their opponents, the San Jose Earthquakes, also picked up all three points as Chris Wondolowski’s header proved just enough to top the Colorado Rapids in a  1-0 win.

Helping the Quakes’ cause is the potential return of Fatai Alashe, who missed last week’s win with a hernia. In addition, Timbers fullback Chris Klute is set to miss out, opening the door for fellow offseason acquisition Zarek Valentin to take his place on the left side.