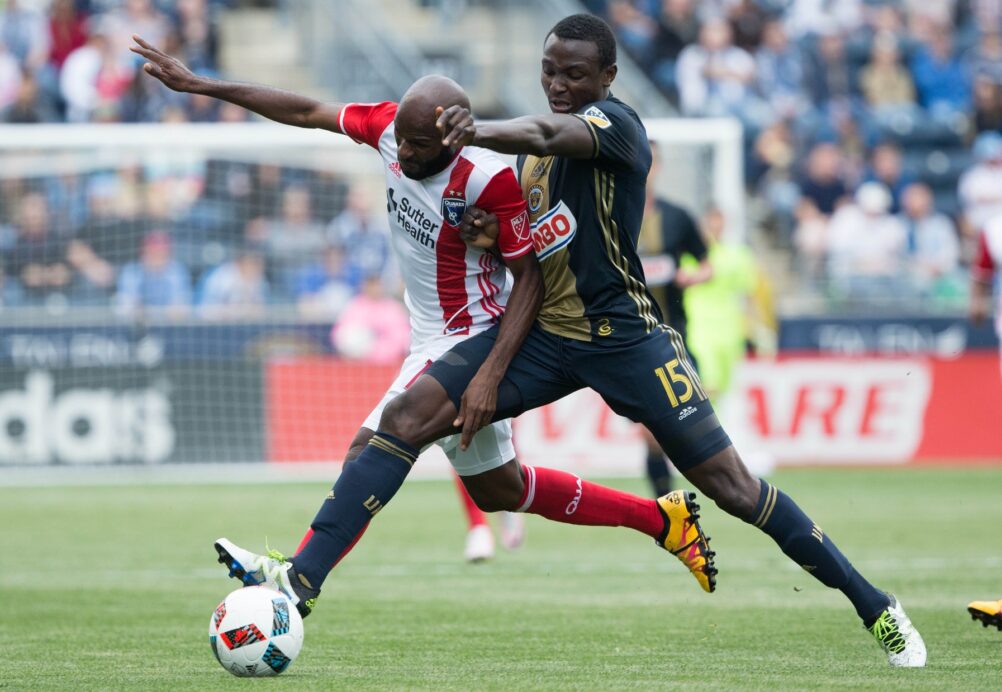 CHESTER, PA — An old trend reared its head at Talen Energy Stadium on Saturday in the Philadelphia Union’s 1-1 draw with the San Jose Earthquakes.

The Union, who have conceded plenty of late goals on their field in the past, let in a second-half tally to Simon Dawkins to drop two points at home.

Dawkins’ late strike allowed the Earthquakes to walk away with a hard-earned point on the road, while the Union were left questioning their ability to kill off a game.

Chris Pontius opened the scoring in the 30th minute as he launched himself into the air to connect with Tranquillo Barnetta’s corner from the left wing. Pontius helped set up his fourth goal of the 2016 campaign with some nice work on the left side of the penalty area to create the set piece opportunity.

C.J. Sapong came close to widening the gap in the 35th minute, but his attempt from close range skied into the stands.

The first major talking point of the second half was produced in the 59th minute, as Earthquakes midfielder Anibal Godoy was sent off for a second yellow. Godoy and midfield partner Fatai Alashe both entered the second half on a yellow.

The Union left the door open for the visitors to pounce for an equalizer in the second half as they failed to send a second past David Bingham.

Shaun Francis handed the Union a few scares late in the second half, but his attempts soared into the crowd. Dawkins put an attempt on target in the 79th minute, but it didn’t test Andre Blake much.

Dawkins found the equalizer he was looking for in the 84th minute as he slalomed through the top of the penalty area and slotted the ball into the left side of the net.

Simon Dawkins was one of the few bright spots in the Earthquakes attack throughout a first half in which the Western Conference club rarely tested Andre Blake. The Designated Player continued to push, and he thrived in the No. 10 role after Shea Salinas entered for Innocent Emeghara in the 55th minute.

Simon Dawkins’ 83rd-minute goal was the best piece of individual skill to grace the field over two halves. The Jamaican cut around a few defenders to find space near the edge of the penalty area. The goal was also the first of the season for the DP.

Anibal Godoy put the Earthquakes in a rough situation after committing his second yellow-card offense in the 59th minute. The Panama international’s foul 14 minutes into the second half forced the visitors to drop deeper in defense in an attempt to fend off the Union attack instead pushing forward for the equalizer.