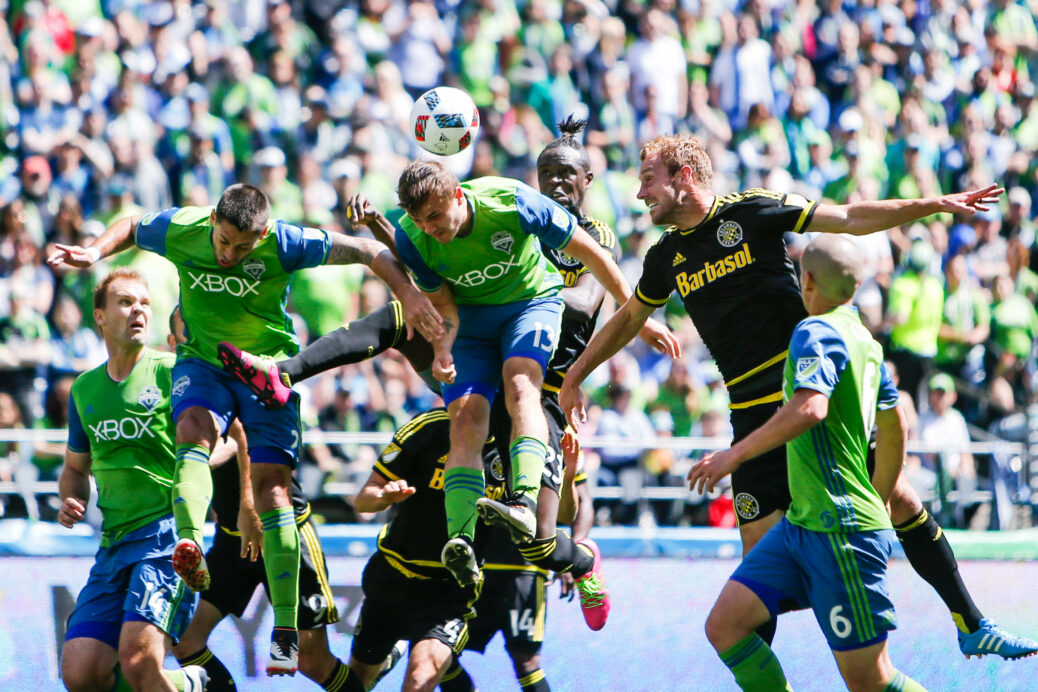 SEATTLE– With his club facing another disappointing result in a season that has seen its share of disappointing results, rookie Jordan Morris delivered a late goal for the Seattle Sounders on Saturday afternoon, lifting his club to a 1-0 victory over the Columbus Crew.

In the 88th minute, left back Joevin Jones sent in a cross to late substitute Oalex Anderson, whose shot deflected off goalkeeper Steve Clark and fell to a lurking Morris. Morris — who has been known to take an extra touch or two as he acclimates to the pro game — pounced, slapping a one-touch shot past Clark for the 1-0 win.

Morris has now found the back of the net in three straight matches, netting the first game-winning goal of his young career in front of 39,473 at CenturyLink Field.

The Sounders (3-4-1, 10 points) have now gone 3-1-1 in their last five matches after starting the 2016 campaign with three straight losses. Coming off a pair of back-to-back home wins, the loss leaves the Crew (2-4-2, 8 points) without a road victory this season.

The match was an entertaining tale of two halves that saw each team put up 16 shots.

The Crew dominated possession during the first half. Speedy fullbacks Harrison Afful and Waylon Francis set up shop in Seattle’s half of the field, at times essentially leaving the visitors with a three man back line as Wil Trapp dropped into defense. Columbus continuously explored Seattle’s left side, seeking to exploit the youthful pairing of Jones and midfielder Cristian Roldan. The tactic yielded its share of gasp-inducing moments for the home crowd, but never produced a goal.

Federico Higuain nearly opened the scoring twice, but was denied by a stellar save in the opening minutes and then failed to take advantage of a golden opportunity just after the half-hour mark.

In the eighth minute, goalkeeper Stefan Frei guessed wrong on a fairly routine shot from Higuain, but managed to deliver a stunning kick-save to keep the Crew off the scoreboard. In the 32nd minute, Frei’s shockingly poor clearance spoon-fed Higuain a chance in front of goal, but the Argentine scuffed a shot directly to Frei.

The Sounders came out on the front foot in the second half, mounting a series of chances in the first 10 minutes. But on the two clearest opportunities Clint Dempsey sent a close-range header sailing just over the crossbar and Morris drilled an open shot into the side of the net. The match then settled down until the Sounders began throwing bodies forward in the final 10 minutes.

Looking forward, both teams are back in action next weekend. The Sounders host the San Jose Earthquakes, while the Crew host the Montreal Impact.

Morris. Three goals in three games would seem to suggest the highly-touted rookie has arrived, welcome news for a Sounders team still attacking in fits and starts.

Frei’s easy save on Higuain in the 32nd minute. A simple pass into the far side of the net and the visitors would have taken a first-half lead and been able play more compact for the remainder of the match.

Kei Kamara. Aside from a pair of shots just past the hour mark, the man who scored 22 goals for the Crew in 2015 was quiet all afternoon. To be fair, that wasn’t entirely the striker’s fault, as teammates missed or ignored some clever, lung-busting runs.