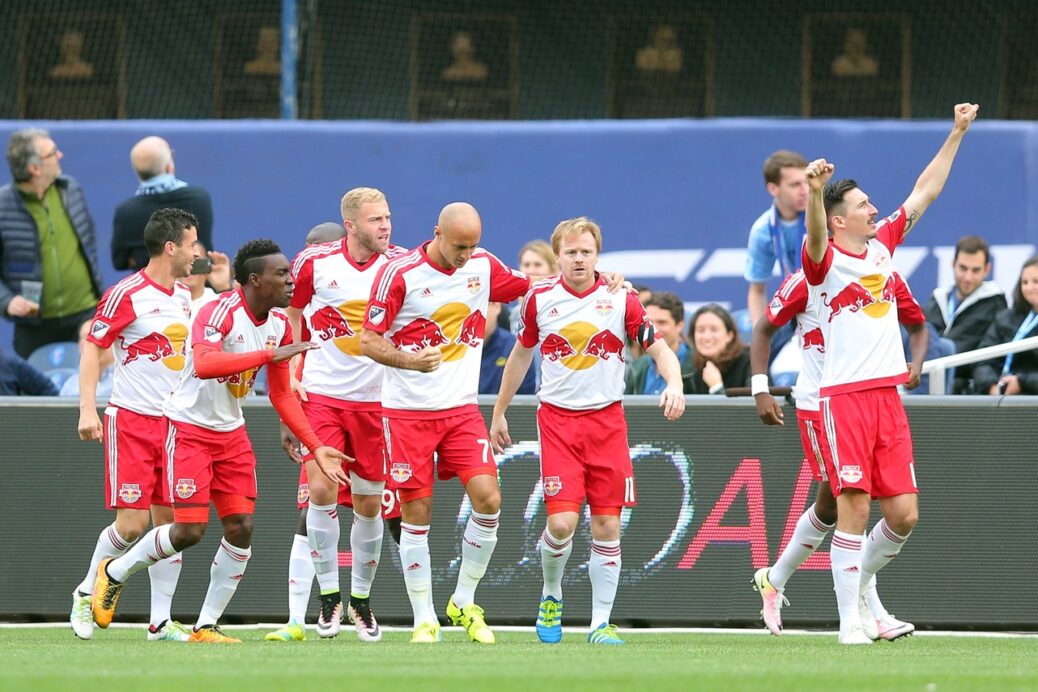 NEW YORK — New York City FC may be winning the battle in the standings, but the New York Red Bulls showed on Saturday that the Big Apple is still red.

Behind braces from Bradley Wright-Phillips and Dax McCarty plus scores from substitutes Alex Muyl, Gonzalo Veron and Gideon Baah, the Red Bulls remained perfect against NYCFC with a 7-0 rout at Yankee Stadium. The score tied for the largest margin of victory in MLS history and Jesse Marsch’s squad has now won each of its four meetings against the second-year club.

McCarty fired the opening goal in the third minute with an aerial finish off a Sacha Kljestan corner. Wright-Phillips then doubled the lead in the 42nd minute with a header himself that squeezed past NYCFC goalkeeper Josh Saunders to the near post.

The 2014 MLS leading scorer made it 3-0 just before the half with a bicycle-kick finish that wrapped around defender R.J. Allen and into the bottom-right corner for his fifth goal of the season.

McCarty helped carry on the barrage from the visitors in the 52nd minute with another header off an assist from Kljestan. Muyl made the lead a handful in the 56th minute — three minutes after coming on as a sub for Mike Grella — with his first career goal. Wright-Phillips provided the assist after winning the ball just outside the NYCFC box.

Veron got on the scoresheet in the 83rd minute with setup from Felipe Martins and Baah put the finishing touches on the rout in the 89th minute with his first career goal.

The first overall pick in the 2016 MLS SuperDraft, Jack Harrison, made his professional debut shortly after Muyl’s goal, subbing on for Tommy McNamara. Harrison had been sidelined with a pelvic injury since preseason.

Frank Lampard also made his season debut for NYCFC in the 76th minute to replace Andrea Pirlo. Lampard had not played since last season’s finale on Oct. 15.

Four yellow cards were handed out in the physical contest, with three of them going to the home side players in the first half. Mikey Lopez, who was booked in the 16th minute, will be suspended for the next match.

Despite the loss, NYCFC remains a point up on the Red Bulls in the Eastern Conference standings at second place. The club will host Orlando City SC next Sunday at home while the Red Bulls will welcome Toronto FC on Saturday.

The 5-foot-9 Dax McCarty scored two headers to help pace the Red Bulls offense along Bradley Wright-Phillips and was one of the most active players in midfield on both sides of the ball.

Bradley Wright-Phillips‘ sensational finish for his second score got the crowd of 37,858 at Yankee Stadium on their feet. The 31-year-old forward continues to haunt NYCFC with his sixth goal against them in the four matches they’ve played.

Ronald Matarrita and R.J. Allen struggled to keep the Red Bulls offense in check from the backline. Both fullbacks made mistakes in marking that led up to goals and were forced to play on their heels for most of the match.