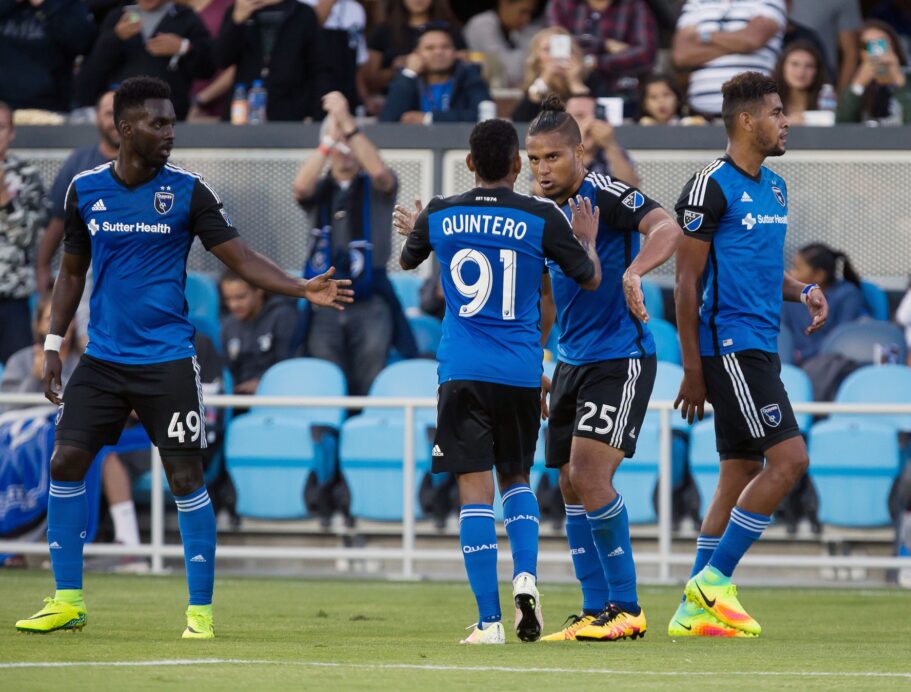 Everything was stacked against the San Jose Earthquakes on Saturday night, but Dominic Kinnear’s side dug deep and pulled out three points at Avaya Stadium.

The Earthquakes captured a 2-1 win at home against Toronto FC, behind Simon Dawkins’ game-winning game in the 70th minute. The midfielder made a fantastic cutting run with the ball towards the top of the box, before unleashing a swerving effort that gave Toronto keeper Alex Bono difficulty.

Just minutes after going up a man, Toronto equalized in the 44th minute by way of Justin Morrow’s third goal of the year. The TFC defender found himself open in the center of the penalty area and headed home Steven Beitashour’s cross from the right wing.

The Earthquakes benefitted greatly from Fatai Alashe’s high motor in the 30th minute, which led to the team’s opener. Alashe won the ball in the Toronto half, before carrying the ball towards the end line and picking out Quincy Amarikwa in the box, who calmly slotted his effort home for the one-goal lead.

Amarikwa was gifted the game’s first big chance four minutes prior when a floated Shaun Francis cross found the head of the Earthquakes forward at the far post. Fortunately for TFC, Bono was in a good position to make the stop at the near post.

Kinnear’s side had their game plan drastically altered just before halftime when Anibal Godoy was sent off over a questionable red card challenge. The Earthquakes midfielder clearly caught TFC rookie Tsubasa Endoh on a lunging tackle near the halfway line, but the referee’s decision to reach for a red appeared to be harsh.

The Earthquakes lost a second player in the 53rd minute, after Alberto Quintero earned himself a red card for a mistimed tackle on Endoh. Despite the challenge coming in late, the referee appeared to get the call wrong again, with Quintero making very little, if any, contact on the Toronto attacker.

The home team was forced to defend for great lengths during the second half, but the Earthquakes held up well defensively thanks to goalkeeper David Bingham’s five saves.

The Earthquakes will be back in action on Friday night against Real Salt Lake, while TFC will host D.C. United the following evening at BMO Field.

While Simon Dawkins provided the winner for the home side, goalkeeper David Bingham did everything he could to keep the Earthquakes in the match.

Down two men, the Earthquakes needed something special to give them all three points, and Simon Dawkins did just that with 20 minutes remaining in regulation.

Sebastian Giovinco‘s goalscoring struggles continued on Saturday as the Italian failed to tally a finish in his ninth straight match.