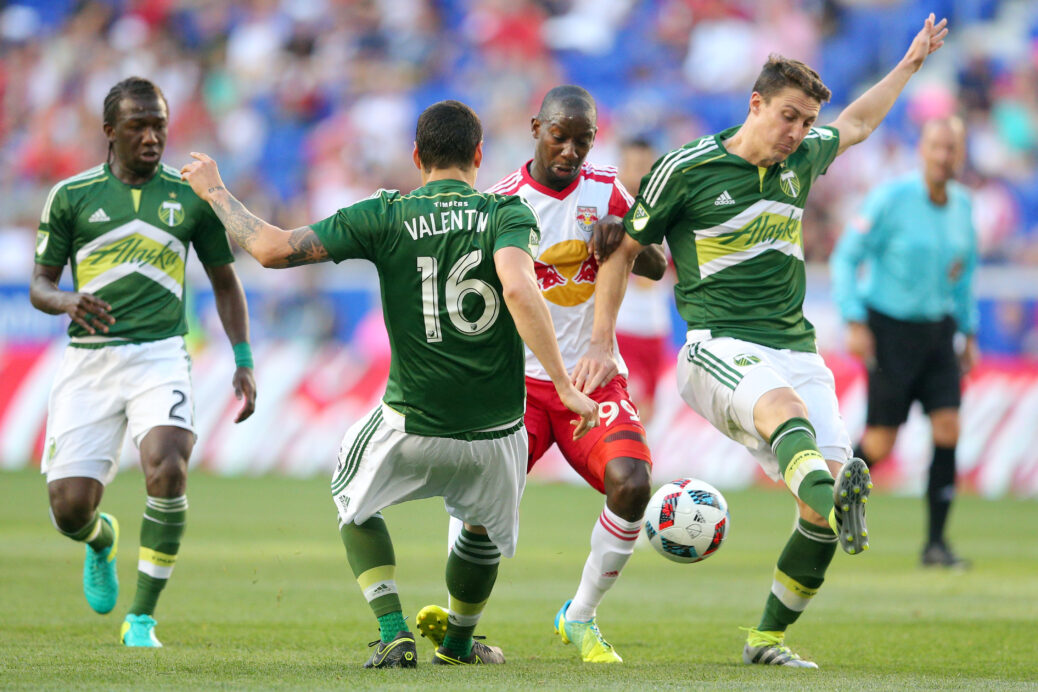 HARRISON, N.J. — Hardly pretty, but effective enough to get a result away from home during the dog days of summer.

The Portland Timbers went on the road and picked up a point against the New York Red Bulls on Sunday, playing the Eastern Conference club to a scoreless draw inside of Red Bull Arena. The Timbers were the inferior side in many areas, including in possession and total shots, but were even in the category that mattered most: the score line.

“I thought it was a good game,” said Timbers head coach Caleb Porter. “Both teams were organized. Neither team was going to back down or give in. We knew it would be a little choppy at times because of their pressure. I thought at times we could have managed that better. We were extremely organized the whole game. I thought we made it difficult on them.”

The Timbers certainly did their part in ensuring that the Red Bulls would not get out of their current slump. The reigning MLS Cup champions, who were without injured playmaker Diego Valeri, took a more conservative approach by trying to stay defensively compact and disciplined while trying to hit back on the counter.

The strategy almost paid off immediately, and despite losing speedy winger Darren Mattocks to an injury less than a minute into the game. In the 10th minute, Nat Borchers used his head to comb a pass backwards into the path of Lucas Melano, whose ensuing attempt from the left was stopped by a soaring Luis Robles.

The Timbers failed to produce that type of danger again, but their defense impressed by holding the Red Bulls’ talented attack mostly in check despite ceding 62.6 percent possession to the Jesse Marsch’s club.

“I told the guys, ‘Obviously as you reach this stage of the season it’s important that you buckle down, defend well, because games get tighter and often times it’s one goal that unlocks it,'” said Porter. “We weren’t able to find that goal but neither were they, and if you can’t find the goal on the road, you buckle down. You get the point, so put that in the bank.”

Cashing in on a solid defensive performance might have been a team effort, but the player who deposited the check was Jake Gleeson. Starting in his 12th consecutive game for the club in place of injured incumbent Adam Kwarasey, Gleeson came up with four saves to post the Timbers’ third cleansheet since he began playing back in mid-April.

One of Gleeson’s stops was of the impressive variety, as he denied Felipe late in the second half to keep the Timbers on even terms. Gleeson stoned the veteran midfielder on a shot inside the penalty area in the 77th minute, making himself big to cut off Felipe’s angle after getting slipped in on goal.

“He’s done a great a job (this year),” said Borchers. “Very easy to play with because he communicates well and he makes really good decisions with the ball at his feet and defensively, coming out, closing down angles. It makes it easy for us at the back.”

While the Timbers were mostly in good spirits following the road draw with the Red Bulls, they were also cognizant of the fact that they need to start picking up wins after a slow start to the campaign that currently has them in seventh place and out of the playoff picture in the Western Conference.

The good thing for them then is that their next three matches are back at Providence Park, and that the defense has started to looked steady.

“It’s going to be vital now that we get some results at home, for sure,” said Borchers. “I think we put ourselves in a real good position to get some confidence defensively and come back home and try to pick up three points.”