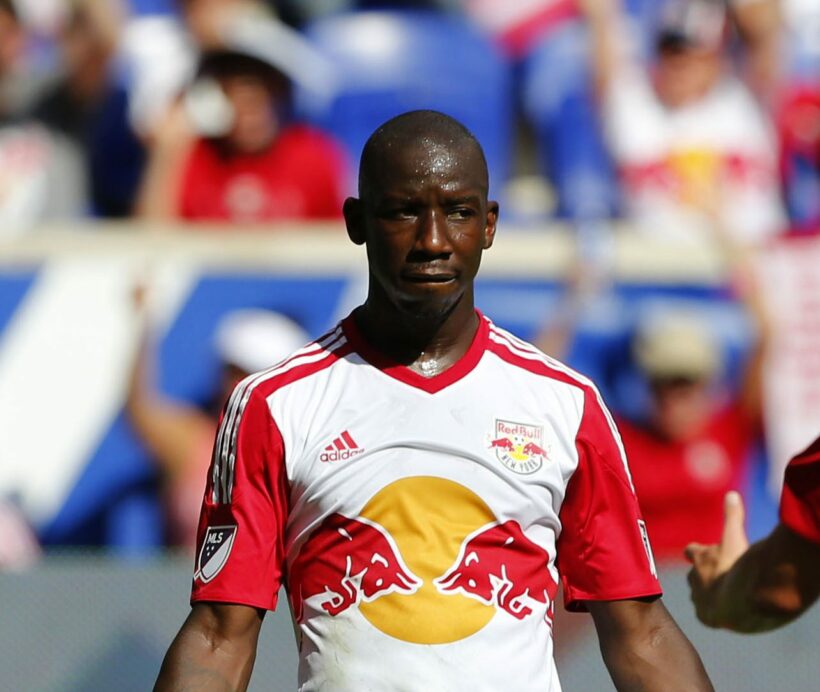 HARRISON, N.J. — Bradley Wright-Phillips was antarctic cold at the start of the season. Now, he is as hot as any striker in MLS.

The New York Red Bulls picked up their latest win of the campaign on Sunday afternoon by edging the New England Revolution, 1-0, and once again it was Wright-Phillips who was largely responsible for the three points that were picked up.

The star striker provided the difference in the match at Red Bull Arena in the 55th minute, scoring superbly via a volley on the rebound. The classy finish was not only all the Red Bulls needed to overcome a Revolution team that put up a good fight, but also marked a personal achievement for Wright-Phillips as it tied him with Sebastian Giovinco and David Villa for the league lead with 16 goals.

All while strengthening Wright-Phillips’ case for the MLS MVP award.

“There’s no forward in the league that I think puts together as many complete performances as Brad does,” said Red Bulls head coach Jesse Marsch. “Then to be able to have the energy to score goals and be lethal around the goal and the way he moves, it’s unique. It’s real special. He’s a special player.”

Wright-Phillips is doing more than just finding the back of the net for the Red Bulls. Along with his tireless running on the defensive side, the Englishman is also setting up teammates for good looks. In fact, he has now either scored or assisted in seven of his last eight games.

That is the type of production that is up there with the very best Designated Players in MLS, but it is also the type of production that eluded Wright-Phillips at the start of the year. It might seem like ages ago, but the 31-year-old forward began the 2016 season on a seven-game scoreless run. He was missing good-looking chances during that string of matches, and appeared to have lost his luck in front of goal, if not his nose for it.

Now, however, he is making an impact in a variety of ways while enjoying what might be his most impressive MLS season to date. Yes, he tied the league record of 27 goals in 2014. Yes, he was a better all-around player with 17 tallies and seven assists last year. Still, he appears to be more of a complete package these days.

Is this the highest level Wright-Phillips has ever played at? He is reluctant to say as much, but those around him aren’t.

Being more cut-throat in front of goal is something Marsch challenged Wright-Phillips with this season, and the star striker has responded. He has also worked on other parts of his game, as was evident on Sunday when he repeatedly sized up defenders, backed into them, and held them off while trying to win aerial balls.

On one play midway through the second half, Wright-Phillips did so impressively. He collided with the bigger Je-Vaughn Watson and brought the ball down in one smooth motion. The manner in which he did so was reminiscent of Thierry Henry, and the product of working with Red Bulls assistant head coach Denis Hamlett on how to use one’s body better.

Plays like that might not necessarily help him garner more votes in the MLS MVP race, but the selfless Wright-Phillips doesn’t mind so long as they help the Red Bulls win more games.

“I’m not as exotic as the rest of the other guys, but it isn’t really important,” said Wright-Phillips. “I say these things a lot and I don’t care if people believe me: If I get top goal-scorer, if I get mentioned for MVP, it doesn’t matter. We didn’t win a championship. We haven’t won one yet.

“This is what we want and this is what the fans want to see. Forget all of that rubbish. It doesn’t matter at the end of the day. We want a ring and that’s it.”

MLS Cup might be the ultimate goal, but that is not stopping the Red Bulls and their fans from enjoying the ride that Wright-Phillips is taking them on.

On Sunday, the club unveiled a new banner that replaced the old one that denoted Juan Pablo Angel’s previously-held scoring record for the Red Bulls. The new sign read “Bradley Wright-Phillips” and had a goal counter next to his name. When the day began, it read 60. After he scored vs. the Revolution, it was manually changed to 61.

You can expect that number to increase in the final months of the season, just as you can expect Wright-Phillips’ chances to win MVP to increase should he keep turning in more performances like Sunday’s.

“Obviously there are some sexy names out there in terms of great players in our league, guys who are having good years,” said Marsch. “But if you look after the first seven games, if you look at the way that Brad has played in the last 20 games, I don’t think there’s been anyone in our league that has been better.”