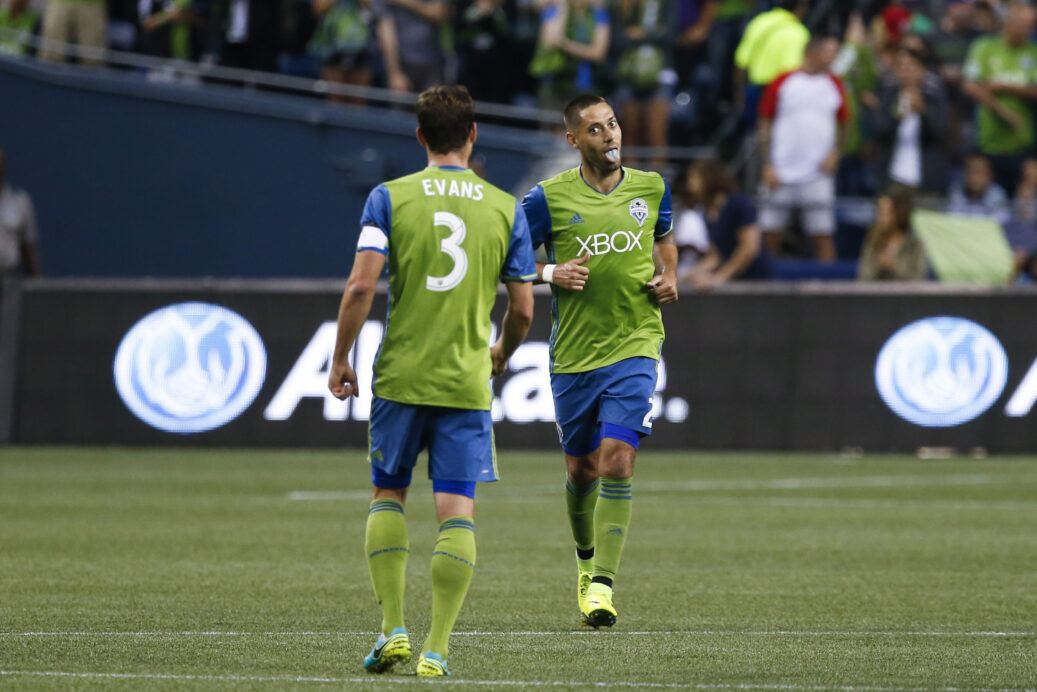 SEATTLE– Things just got interesting in the Pacific Northwest. The Seattle Sounders routed the Portland Timbers in front of 53,302 at CenturyLink Field on Sunday night. All but written off just weeks ago, Seattle’s 3-1 victory puts it back in the thick of the playoff race, hot on the heels of the archrival Timbers.

The win moves the Sounders (9-12-3, 30 points) into a tie with the Vancouver Whitecaps for eighth place in the Western Conference. Seattle now trails the Timbers (8-10-8, 32 points) by just two points for the sixth and final playoff spot in the conference, and visits the Houston Dynamo midweek before traveling to Portland for a rematch next weekend. The Sounders also have two games in hand on the Timbers.

A tense match blew open in the 61st minute with a Clint Dempsey penalty kick. Referee Alan Kelly awarded the penalty after Vytas Andriuskevicius brought down Cristian Roldan near the endline. Dempsey converted down the middle for the 1-0 lead and his seventh goal of the year.

Jack McInerney had three chances to equalize in the next 10 minutes, but sent two headers high before finding himself alone at the top of the 6-yard box and unable to challenge charging goalkeeper Stefan Frei.

Dempsey added the insurance goal in the 80th minute, collecting a pass from Roldan 30 yards from goal and cruising unattended to the top of the penalty area before ripping a shot past goalkeeper Jake Gleeson for the 2-0 lead.

Roldan added the third and final goal just three minutes later. Brad Evans headed a short corner from Nicolas Lodeiro across the face of goal, where a charging Roldan headed home from just three yards out.

Fanendo Adi, coming off the bench for just the third time this season, scored a goal for the visitors in the final moments of stoppage time. Alvas Powell found Adi unmarked near the penalty spot, and the Nigerian striker wasted no time in beating a helpless Frei.

For their part, the Timbers have now lost four of five in league play, have yet to win a road game in 2016, and have never won a regular season match at CenturyLink Field.

The first half played out just about as forecast for this rivalry: tense and anxious with a few cards (two for the hosts, one for the Timbers). The Sounders methodically built possession through Lodeiro, but were unable to create many legitimate chances. The Timbers unleashed deadly-looking counters that time and again ground to a halt at the final pass. Spearheading a 4-2-3-1, McInerney struggled throughout.

The first chance of the match came through Jordan Morris in the 10th minute, as he outmuscled and sped away from Powell before thundering into the attacking third before sending a shot wide right. The chance seemed to spark the Sounders, though; moments later Osvaldo Alonso forced Gleeson into a fingertip save from outside the penalty area.

In the 48th minute, Lodeiro ripped a shot from distance that looked goal-bound before deflecting off a Portland defender. Moments later, Dempsey volleyed an Andreas Ivanschitz corner kick over the crossbar. Dempsey then sent a wide-open shot just past the left post. Morris had initially tracked down a beautiful through-ball from Lodeiro before laying a ball into the middle of the penalty area for Dempsey.

Looking forward, the Timbers are off until next weekend’s rematch at Providence Park in Portland, Oregon. The Sounders will first visit the Houston Dynamo (5-10-9, 24 points) on Wednesday before traveling down Interstate 5.

Cristian Roldan. Involved in all three goals. Provided solid defensive work throughout the first half, then earned a penalty and picked up both an assist and a goal in the second half. The Sounders have given the young prospect a ton of minutes over the last two years. That investment is very much beginning to pay off.

The penalty kick. Changed the tenor of the match. Portland still had chances down the stretch, but the Sounders seemed to playing downhill for the final 30 minutes.

Jack McInerney. Struggled with the first touch and final pass throughout. Took too many touches, spent too much time over the ball. Near the hour mark he had a wide-open look from 12 yards out and scuffed a slow-roller that failed to challenge Frei. Later came up empty on a golden chance to equalize.