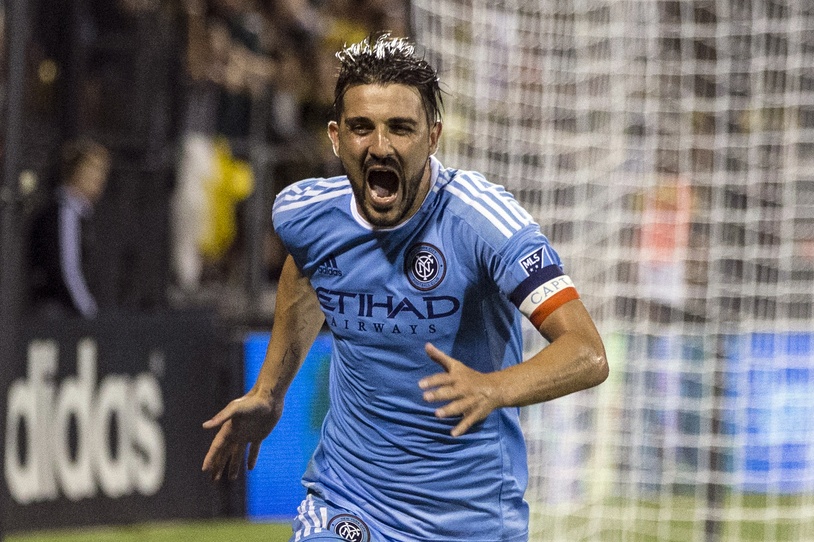 NEW YORK — Saturday’s clash between New York City FC and the LA Galaxy was billed as a battle between Frank Lampard and Steven Gerrard. Instead, it was David Villa who stole the show.

The NYCFC captain tallied his league-leading 16th goal of the season and guided his side to a 1-0 win over the Galaxy in front of 35,509 at Yankee Stadium. The 35-year-old forward has now scored three goals in his past two matches after being kept off the scoresheet in three prior contests.

The lone tally of the match came in the sixth minute with buildup from the midfield.

Jack Harrison provided a diagonal pass to a streaking Ronald Matarrita down the left flank in the sixth minute. The NYCFC left back had his shot saved by goalkeeper Clement Diop but Villa was there to tap home the rebound.

The Galaxy slowed down the home side’s tempo afterward by apply heavier pressure on the ball, but missed several chances to find the equalizer.

In the 20th minute, NYCFC’s Jefferson Mena misplayed a back pass near the box and gave Nigel de Jong a clean look on goal. The 31-year-old midfielder’s left-footed attempt, however, sailed wide of the net.

Villa had a an opportunity to double his side’s lead in the 35th minute but after his initial attempt was saved by Diop, his follow-up effort hit the side of the net.

Eight minutes later, De Jong had a chance at redemption but his bicycle-kick attempt was tapped away by a sprawling Josh Saunders.

The second half saw NYCFC focusing more the defensive side while pushing for its second goal on counter-attacks. The Galaxy’s backline held on firmly but couldn’t put the ball past Saunders in the few chances they had.

Robbie Keane missed an aerial attempt in the 71st minute with setup from Sebastian Lletget, while Jelle Van Damme missed a point-blank volley after receiving a well-placed diagonal cross from Steven Gerrard in the 82nd minute.

The win not only avenges a 5-1 rout at the hands of the Galaxy last season in Carson, Calif., for NYCFC, but also pushes the club’s franchise record of home winning streak to four matches. The Galaxy, who came into the contest tied for the fewest losses in MLS at three, saw their nine-match undefeated streak come to halt.

NYCFC will pay a visit to its inaugural head coach Jason Kreis next when it takes on Orlando City SC at the Citrus Bowl next Sunday. The Galaxy, on the other hand, will head to Chicago for a midweek tilt against the Fire on Wednesday.

Not only did David Villa regain his solo lead of goals scored in MLS this season, but his holdup play and ball distribution in the attacking third provided plenty more opportunities for the home side to tack onto its lead.

Jefferson Mena’s error in the 20th minute could’ve proved costly but Nigel de Jong was unable to capitalize on the opportunity, squandering the Galaxy’s best chance to find the back of the net in the contest.

Robbie Keane tallied two goals and two assists in the clubs’ meeting last season at the StubHub Center but barely made his presence felt in Saturday’s contest. The 36-year-old forward was unable to get many touches in threatening positions and missed the opportunities to score when he did receive them.