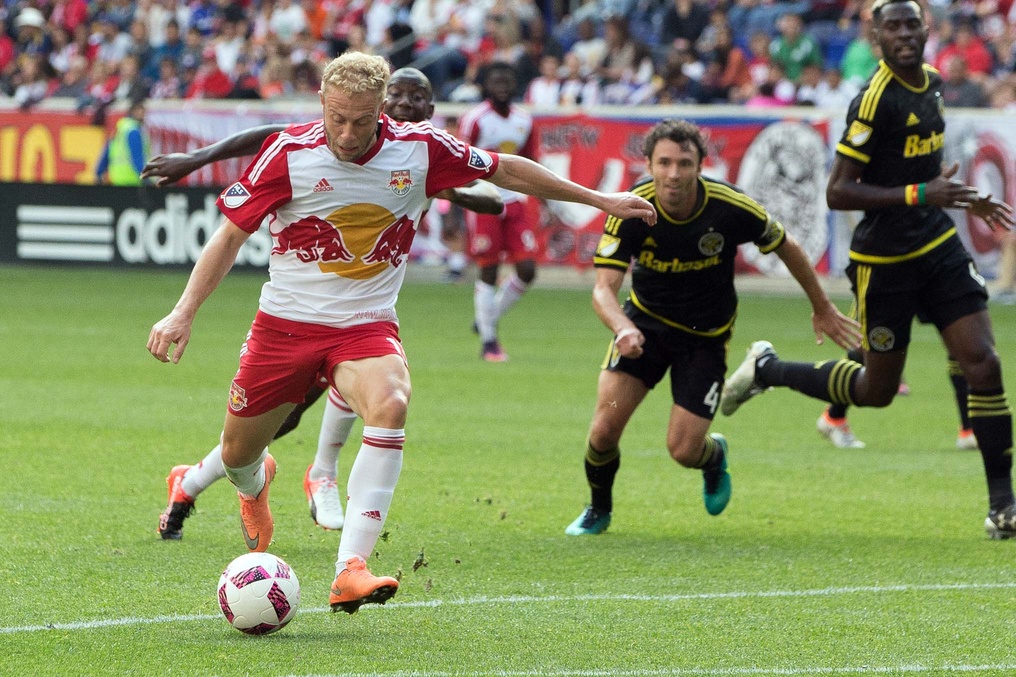 It came down to some scary moments at the end for the New York Red Bulls, but the reigning Supporters’ Shield champions managed to hold on Sunday afternoon at Red Bull Arena.

A trio of second-half finishes from the hosts gave the Red Bulls a 3-2 win over the Columbus Crew, all but locking up the top spot in the Eastern Conference for Jesse Marsch’s side.

With one match remaining in the regular season, the Red Bulls lead second-place New York City FC by three points and hold a 13-goal lead in goal differential, the second tiebreaker after total points.

Bradley Wright-Phillips scored a brace after halftime for his 22nd and 23rd goals of the season. The Englishman found his first of the day on the stroke of an hour played after the forward brilliantly cut back from a tight angle and powered his strike between the legs of goalkeeper Brad Stuver.

The second came in the 70th minute following a Sacha Kljestan corner kick that was initially flicked on at the near post by centerback Aurelien Collin.

The Crew pulled back a pair of goals inside the final 20 minutes when Adam Jahn and Harrison Afful netted for the visitors, but their pressure wasn’t enough to ruin the day for the Red Bulls.

After nearly four months without a goal, Grella netted the game’s opening tally in the 53rd minute following a perfect set up from Sacha Kljestan. The U.S. Men’s National Team midfielder received the ball at the top of the Crew penalty area, before laying it off to Grella, who calmly curled his effort into the top corner.

The Red Bulls were nearly gifted an opportunity to break the deadlock after seven minutes when Alex Muyl poked the ball away from Stuver inside the penalty area and was taken down by the 25-year-old goalkeeper. However, Stuver avenged his mistake immediately after comfortably saving Kljestan’s ensuing penalty kick to keep the match scoreless.

Without a host of attacking threats, including Ola Kamara and Federico Higuain, the Crew struggled mightily to break down the Red Bulls backline. Greg Berhalter’s side managed a mere one shot on target during the opening stanza, when Tony Tchani unleashed a shot from distance that Luis Robles saved brilliantly to his right.

The Red Bulls will close out the regular season next Sunday on the road against the Philadelphia Union, while the Crew travel to Yankee Stadium to meet New York City FC.

With goals 22 and 23 on the season, Bradley Wright-Phillips sits in the driver’s seat for the MLS Golden Boot award and the victory helps put the Red Bulls one step closer to earning the top spot in the Eastern Conference.

There was a question of offsides on Wright-Phillips’ second finish, but the striker’s tap-in proved to be massive for the Red Bulls after the hosts conceded a pair of late goals.

Starting in place of Steve Clark, Brad Stuver did his best to deny the Red Bulls on several occasions, but his early blunder taking down Alex Muyl and allowance of three goals certainly wasn’t ideal for the goalkeeper.