After months of must-win games, Sounders prepared for task of taking on Rapids 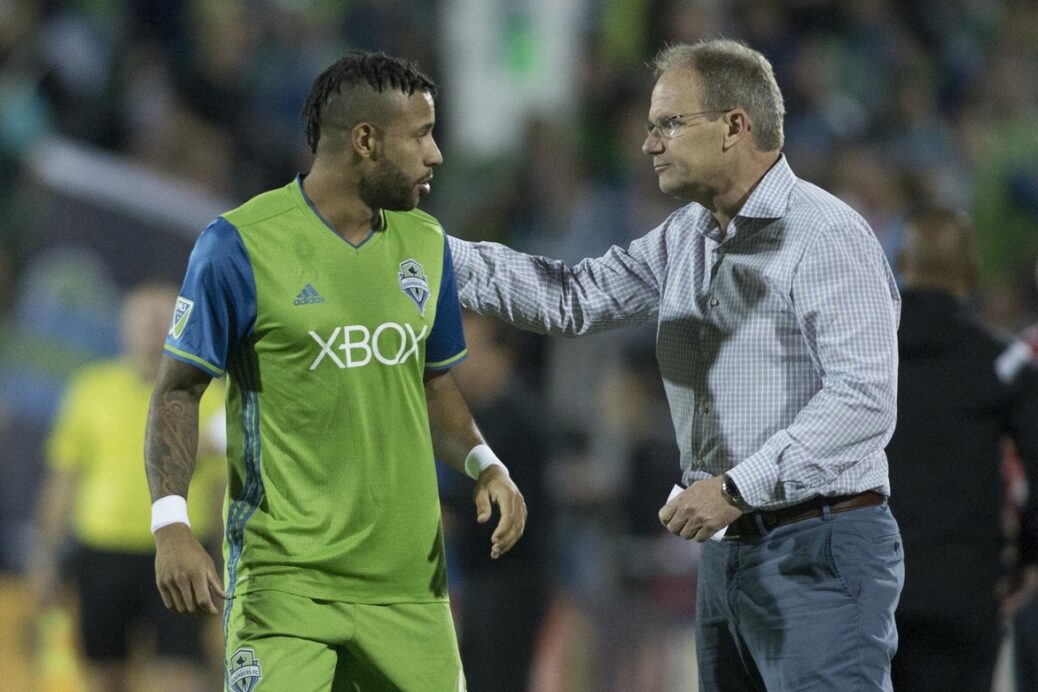 Throughout his time as Seattle Sounders head coach, Brian Schmetzer has instilled a mantra within the group. The coach wants his players to live in the moment, enjoying everything that comes with their success, but when tomorrow comes, it’s time to get back to work.

The Sounders have had plenty of time to enjoy the moments leading up the Western Conference finals, but now the real work begins.

On Tuesday night, the Sounders take on the Colorado Rapids in the first leg of the Western Conference final. The opening match comes at CenturyLink Field, giving Schmetzer and co. a chance to set the tone in the pursuit of the club’s first MLS Cup appearance.

The Rapids present a variety of challenges. Defensively, there’s no team in MLS quite like Pablo Mastroeni’s side, which has proven as stingy as can be throughout 2016. On the attacking end, the Rapids have several dangerous pieces, each of which is more than capable of poaching the goal needed to seal a result.

Brian Schmetzer and the Seattle Sounders have hurdled challenge after challenge throughout the past several months, and they feel more than prepared for the monumental one that lies ahead.

“Every game since we have taken over has been a must-win game,” Schmetzer said. “We were so far behind all the other teams, that every single game that we’ve had so far to this day has had a big meaning behind it. I would say the games, the later they go in the season, that ratchets it up even a notch or two because you see your ultimate goal of winning an MLS Cup is certainly within your reach.

“I think the feel around here in Seattle, from the fans that are out on the streets, the people that I talk to, my friends here around the Seattle area, it’s a big deal because people are excited about some of the turnaround, the story of the turnaround, losing (Clint) Dempsey, losing our best player, there’s a ton of good storylines here. I think it’s a big match and it rivals, maybe it’s not a cup final yet, but it rivals some of the very tough games we’ve had against Portland and LA. It’s a big game for us, at least from where I’m sitting.”

Schmetzer is now sitting in the position of head coach, a title more than deserved given the hole he helped dig the Sounders out of. Following the departure of longtime head coach Sigi Schmid, Schmetzer stepped in to right the ship, guiding the Sounders to a 8-2-4 record down the stretch to seal a playoff berth that seemed impossible in the summer.

A key part of that resurgence was the play of Jordan Morris, a player who most recently missed U.S. Men’s National Team duty due to injury. Schmetzer says that Morris is “getting a little better” each day and that the club is trying to get him back on the field as quickly as they can.

Morris will no doubt be a vital piece of how the Sounders play on Tuesday, should he be available. Schmetzer says he expects the midfield to be an absolute battle, and pointed to former Sounder and current Rapids midfielder Michael Azira as one to watch throughout the game. However, Schmetzer has full confidence in the likes of Ozzie Alonso, Cristian Roldan and Nicolas Lodeiro to win that battle to help take pressure off the rest of the team.

“We like to be a possession-based team,” Schmertzer said. “We like to make sure that we find the right balance and play directly through Jordan Morris’ strengths, finding that extended possession in the opponent’s half of the field to create opportunities that way.

“We have a formidable team on set pieces and the delivery with Nico (Lodeiro) has been tremendous. We know Colorado is the best team in the league defensively and we certainly respect that. We will just go out there and try to play Seattle Sounders soccer and if we create enough opportunities, I think we have the quality that we will be able to finish one of those opportunities.”

If they can, the Sounders will have a major advantage. Schmetzer says it’s nice to play at home for the opening leg, as it gives the Sounders the chance to set the tone in front of a raucous CenturyLink Field crowd. However, should his team concede, the Sounders boss is more than confident in his team’s ability to go out and get a road result. Even with the Rapids’ sterling home record, Schmetzer believes the entire series will be decided on one or two moments, no matter which stadium they come in.

He’ll hope they fall his way. After months of battling and overcoming what appeared to be insurmountable odds, Schmetzer feels that his side is ready for the challenges that lie ahead.

“We are looking forward to a great match,” Schmetzer said. “Pablo has done a great job with his team. I think earlier on in the season when we played him, some of the commentary that we had in our coaches’ room after we played him was that that was a team that believes they can win, that they believe in the way they were playing. We are happy the first match is here at home, in front of a really hyped-up, fantastic crowd, and our preparation has been decent. Obviously, there has been challenges with it being international break, but the guys seem to be ready and just looking forward to a really good game.”