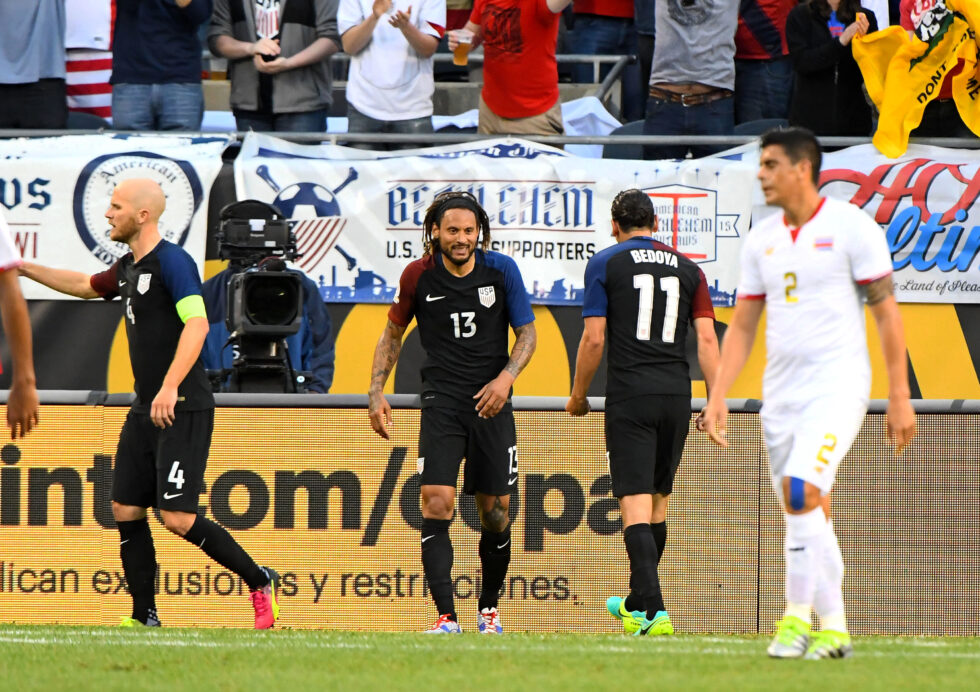 Most U.S. Men’s National Team fans and observers might be looking towards the future right now, but 2016 had its good moments. It also had its good goals, too.

The U.S. had a year filled with highs and lows, including a coaching change at the end of it following some poor results, but the past 12 months gave Americans everywhere plenty of goals to scream in ecstasy about. There was a total of 37 tallies scored in the 19 matches the U.S. played in this year, and some of those strikes were impressive.

From well-placed shots to a tap-in that came as a result of great interplay to an emotional equalizer vs. an archrival, the U.S. had some decent finishes in 2016. There might not have been golazos like in years past, but there were still some nice efforts  worth remembering and reliving.

Beauty might be in the eye of the beholder, but SBI has gone through this year’s U.S. goals to come up with its annual top list. Everything is taken into account, including degree of difficulty and the quality of the opposition, and the staff narrowed down the best five.

The end result might have overshadowed any of the good that the U.S. had in its quadrennial meeting with Mexico in Columbus, Ohio, but Bobby Wood provided an adrenaline-pumping goal with his nifty finish that equalized the World Cup Qualifier at Mapfre Stadium. Wood pulled the game level in the 49th minute when he collected a pass from Jozy Altidore, powered his way past a defender, raced into the box, and slipped a low shot into the back of the net, giving the Americans a chance to pull out a result against their bitter rival before falling, 2-1.

Tap-in goals may not necessarily be gorgeous, but Jozy Altidore’s second tally in the 63rd minute of the home World Cup Qualifier against Trinidad & Tobago was impressive because of the build-up. Sacha Kljestan and Christian Pulisic carved Trinidad & Tobago’s defense open like a holiday turkey with a quality one-two down the left flank, and Pulisic’s ensuing low cross accurately found Altidore at the back post for the simple finish in the 4-0 affair.

Plays like this are why the Christian Pulisic hype train is at full steam right now. Pulisic showed maturity well beyond his years with a composed strike in second-half stoppage time of the U.S.’s 6-0 road rout of St Vincent & the Grenadines in World Cup Qualifying. He collected a pass at the top of the penalty area in the 92nd minute of the one-sided affair, and perfectly placed his shot away from the helpless goalkeeper and inside the left post to record a brace. Sure, he was wide open, but the decision to go for placement instead of power and the ability to tuck it away so well makes this a solid strike.

Not to be outdone, Bobby Wood also had a heck of a goal in that 6-0 mauling of St Vincent & the Grenadines. Wood broke open the scoring and netted the winner in the game by hitting a beautiful curler into the back of the net in the 28th minute. The U.S. striker reacted quickly on the play, pouncing on the ball that Fabian Johnson put into his path and getting just the right amount of bend and power on it with his slap shot from just outside the penalty area.

If you ever need a goal to illustrate incredible placement, Jermaine Jones’ tally against Costa Rica in the Copa America Centenario should more than suffice. Jones found the back of the net in the group-stage meeting in the 37th minute when he fired a low shot from outside the box that whipped around a defender and snuck inside the far post. The goal was the Americans’ second in the 4-0 shellacking of Costa Rica, and it was by far the best given how impressively Jones hit it.

What do you think of SBI’s Top 5 USMNT goals of 2016? Do you consider Jones’ strike as the best of the year? Should any other goals from the past 12 months be on this list?