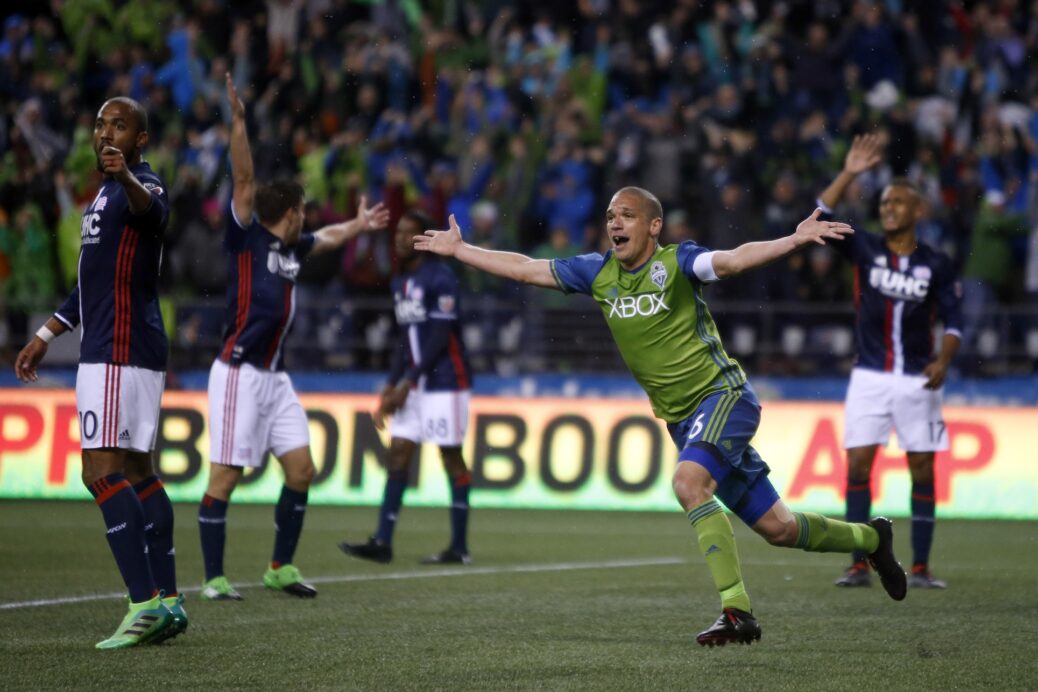 SEATTLE– Never underestimate the heart of, well, you know.

For 75 minutes on Saturday night the defending champion Seattle Sounders could not catch a break. They had bossed possession, controlling roughly 75 percent of the ball for most of the night. They would end up outshooting the visitors 26-13. And yet they trailed the New England Revolution 3-0 in front of 43,230 at rain-soaked CenturyLink Field, hitting the woodwork or finding themselves denied by the outstretched glove of goalkeeper Cody Cropper time and again.

And then the Sounders (3-2-3, 12 points) scored three times in 12 minutes to snag the unlikeliest of draws against the New England Revolution (2-4-3, 9 points). The draw extended the Sounders’ home unbeaten streak to 14 matches spanning parts of two seasons. The Revs remain winless in five road games this year.

With his team trailing 3-0 in the 75th minute, Nicolas Lodeiro finally pulled one back for the Sounders, stepping into a Joevin Jones cross and first-touching a short-range shot that deflected off defender Antonio Mlinar Delamea and past a flat-footed Cropper.

It seemed like a consolation goal, a minor salve on the wound of an ugly home loss.

Jones assisted again in the 85th minute, finding Will Bruin in the heart of the penalty area as the striker split a pair of Revs defenders to head home his third goal of the season and pull the Sounders to within 3-2.

CenturyLink Field was electric, and the Revolution looked shellshocked.

Two minutes later, Lodeiro sent in a short cross that center back Gustav Svensson flicked toward goal. Osvaldo Alonso slipped in unmarked and tapped in a soft, short-range header that shook the stadium.

For most of the night a draw seemed a far-fetched idea.

The visitors took the 1-0 lead just 15 minutes into the match through Daigo Kobayashi. Taking a chance after a Sounders turnover near midfield, Kobayashi launched a 35-yard shot toward the Sounders goal that looked like a routine save for goalkeeper Stefan Frei. But the ball scooted under Frei’s gloves as he bent to collect the looping shot, ricocheting off his knee and into the net for a 1-0 New England lead. It was Kobayashi’s first goal — and just his second shot — of the season.

Juan Agudelo doubled the lead in the 26th minute, beating Svensson to a Kelyn Rowe cross and powering a short header past Frei for the 2-0 lead and his fifth goal of the season.

Agudelo added his second goal of the night in the 54th minute, stepping into a Fagundez pass on the counter attack and easily beating Frei from just outside the 6-yard box for a seemingly insurmountable 3-0 lead.

The Sounders nearly found the back of the net countless times before finally mounting their late rally.

In the 64th minute, Clint Dempsey released Jordan Morris behind the the New England back line, but under pressure from a Revs defender Morris sent yet another shot off the frame. It was the 10th time the Sounders have hit the woodwork in eight matches this season.

Surprisingly aggressive for a road team nursing a two goal lead, the Revolution nearly added a third goal in the 41st minute. Recirculating the ball after a broken counter, the Revs found Fagundez unmarked in the penalty area, but this time Frei came up big for the Sounders, diving left to paw away a shot bound for the far-side netting.

The Sounders outshot the Revolution 13-8 in the first half, controlling 75 percent of the ball, and yet trailed 2-0.

The near misses continued for the Sounders to start the second half, with Alonso hitting the crossbar from the top of the box with a left-footed half volley.

Joevin Jones was dangerous throughout, was credited with two well-earned assists, and could have picked up at least one more.

Will Bruin’s goal in the 85th minute set the stage for a dramatic final five minutes.

Stefan Frei. Who knows if the Revs ever find a second and third goal if a blown save doesn’t give the visitors the early 1-0 lead.