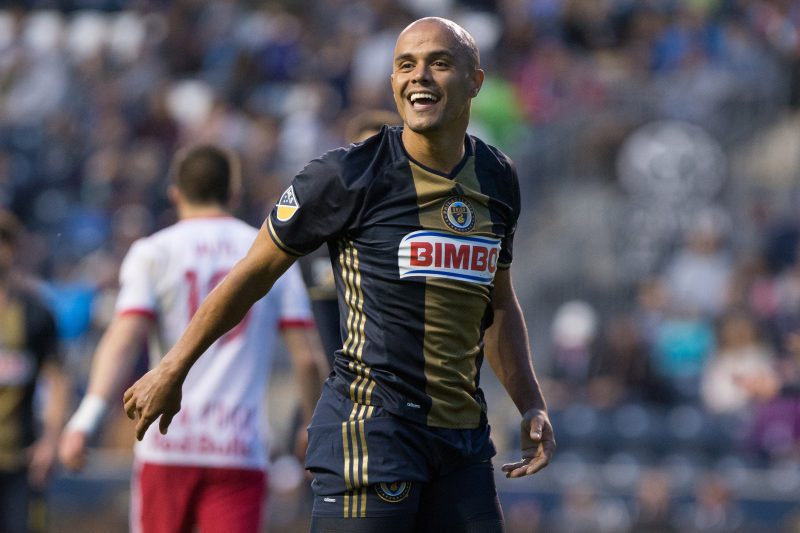 An upset victory marked the moment of the weekend in week 10 of MLS action, while a few top teams had terrible weeks.

The Philadelphia Union are the story of the week after seizing their first win of the season against the New York Red Bulls. The Union no longer hold the dubious title of basement-dweller, thanks to the continued struggles of the Colorado Rapids.

The aforementioned Red Bulls suffered through a two-loss week that knocks them down a peg. The same can be said for Orlando City, who cooled off in big fashion after a demolition job at the hands of the Houston Dynamo. It was a bad week for the upper echelon overall, as fully half of last week’s top ten found themselves on the losing end of things.

THIS WEEK: vs. New York City FC on Sunday.

OUTLOOK: No problems on the road for FC Dallas, who took their unbeaten show to Real Salt Lake on Saturday in a comprehensive 3-0 victory. Max Urruti bookended the match with a third minute penalty and a 91st minute finish to cap a two-goal performance that leaves the rest of the league wondering how to beat this strong FCD team.

OUTLOOK: The woes of the early season seem far in the rearview for Toronto FC, as the self-proclaimed ‘deepest team in the history of the league’ flexed their depth while winning a trio of matches. The three wins leap them to the top of the Eastern Conference, as they face yet another match at home against Minnesota United.

THIS WEEK: at FC Dallas on Sunday.

OUTLOOK: One of the most comprehensive team performances of the weekend saw New York City FC handle their business at home in defeated Atlanta United, 3-1. The win keeps NYCFC near the top of the East as they try to figure out how to do the so-far-impossible, defeat FC Dallas.

OUTLOOK: After a nice midweek victory over the New York Red Bulls on Wednesday, the Sporting KC machine faltered as their heavily rotated line-up couldn’t handle Minnesota United in a 2-0 defeat. Still, SKC sit comfortably near the top of the Western Conference entering a difficult match at Orlando City Stadium.

THIS WEEK: vs. the Vancouver Whitecaps on Friday.

OUTLOOK: Well, suffice it to say, not many people saw last weekend’s 4-0 beatdown of the red-hot Orlando City coming. With a brace from Mauro Manotas, and goals from Alberth Elis and Romell Quioto, the Dynamo pounded the Lions at home. They’ll stick around for another week as the Vancouver Whitecaps hope to slow their roll.

OUTLOOK: Orlando City’s hot start was bound to cool off eventually, but perhaps it didn’t have to cool off quite so dramatically. After dropping a close midweek contest to Toronto FC, the Lions were overwhelmed as the Houston Dynamo put up four against them and captured all three points. The Lions remain unbeaten at home, but those road woes are something to watch.

LAST WEEK: Lost to the San Jose Earthquakes, 3-0, on Saturday.

THIS WEEK: vs. Atlanta United on Sunday.

OUTLOOK: Saturday was an eerie reminder of the Portland Timbers road form in 2016. After surrendering early to Jahmir Hyka, the Timbers were helpless to stop two scrappy Chris Wondolowski goals as they fell 3-0 to the Quakes at Avaya Stadium. Still, like Sporting KC, the Timbers sit comfortably in the West as they welcome Atlanta United to Providence Park this weekend.

OUTLOOK: In the rematch of last year’s MLS Cup Final, the Seattle Sounders got a taste of the other side of the scoreline as they fell to Toronto FC, 1-0. The loss leaves the Sounders with 17 dropped points through their first nine matches, a bad start for the defending champs. They’ll need to correct in Chicago this weekend.

THIS WEEK: at the Portland Timbers on Sunday.

OUTLOOK: Atlanta has certainly cooled off after their hot start, with three losses in their last four. They never stood a chance at Yankee Stadium as NYCFC handled them easily in a 3-1 defeat. Now Atlanta will need to bounce back to winning form, but face a tough challenge against the Portland Timbers at Providence Park.

THIS WEEK: at the Colorado Rapids on Saturday.

OUTLOOK: The San Jose Earthquakes made it two in a row on Saturday, as they built on the past week’s win over Minnesota United with an even more impressive 3-0 win over the Portland Timbers last weekend. They’ll try to make it three in a row as they visit the very much struggling Colorado Rapids this weekend.

LAST WEEK: Lost to Sporting Kansas City, 2-0, on Wednesday; Lost to the Philadelphia Union, 3-0, on Saturday.

THIS WEEK: vs. the LA Galaxy on Sunday.

OUTLOOK: If Toronto FC had the best week in the league, the New York Red Bulls had the worst. After an understandable midweek defeat to Sporting KC, in which the Red Bulls fielded a weakened line-up, nobody expected the Philadelphia Union to roll them in a 3-0 road defeat. The two losses mark another chapter in an inconsistent Red Bulls 2017, with a struggling Galaxy team set to visit this weekend.

OUTLOOK: The Crew handled business against the lackluster Revolution last weekend, with two goals from Ola Kamara and Federico Higuain making the difference in a 2-0 win. A late loss to TFC serves as a setback, though, as two late goals saw the Crew drop all three points. Now, they visit the Impact on the road this weekend for another tough match.

THIS WEEK: vs. the Seattle Sounders on Saturday.

OUTLOOK: The Chicago Fire took advantage of the LA Galaxy’s recent home woes and managed to steal a point away at the StubHub Center, thanks to the efforts of David Accam and Nemanja Nikolic. They’ll be disappointed to not have taken all three points after surrendering their 2-0 lead in the second half. They’ll try and hold on to all three this weekend as the Sounders come to town.

THIS WEEK: at the Houston Dynamo on Friday.

OUTLOOK: The Vancouver Whitecaps went on the road to Colorado and left winners for the second straight match, also their second straight on the road. Brek Shea marked his return with an 84th minute winner, leaving the Caps aiming to close their road trip three-for-three as they visit the Houston Dynamo this Friday.

OUTLOOK: This Minnesota United team couldn’t look more different from the one that opened the year so slowly. The Loons secured their second win in two matches by defeating Sporting KC with a 2-0 victory on Sunday. They’ll perhaps benefit from facing Toronto FC after the latter’s midweek match this weekend as they travel to BMO Field.

LAST WEEK: Lost to the Montreal Impact, 1-0, on Saturday.

OUTLOOK: A disappointing return to the offensive issues of the early season, D.C. United could get nothing going in their 1-0 defeat against the Impact last weekend. They sit outside the playoff picture, but will hope to jump back in as they take on the no longer winless Philadelphia Union on Saturday.

THIS WEEK: vs. the Columbus Crew on Saturday.

OUTLOOK: Upwards for the Impact, who managed their second overall and first road win of the season, as they took down D.C. United 1-0 at RFK Stadium. The Impact will be bolstered by new addition Blerim Dzemaili this weekend as they welcome the Columbus Crew to Saputo Stadium.

LAST WEEK: Lost to the Columbus Crew, 2-0, on Saturday.

OUTLOOK: The Revolution disappointed on the road last weekend, as they couldn’t manage much of an attack against the Crew, who went on to win the match 2-0. This weekend they return home, seeking their first win since April 8th as they take on Real Salt Lake at Gillette Stadium.

THIS WEEK: at the New York Red Bulls on Sunday.

OUTLOOK: The LA Galaxy continue to struggle in 2017, as their 2-2 draw against the Chicago Fire leaves them with the dubious distinction of having the most dropped points at home so far this year. Thankfully, the Galaxy get away from home this weekend. Less fortunately, they have to travel to Red Bull Arena and take on a Red Bulls team looking to bounce back from their own atrocious week.

THIS WEEK: at the New England Revolution on Saturday.

OUTLOOK: After two wins to start Mike Petke’s tenure, Real Salt Lake have fallen off the wagon hard with three straight defeats, with the latest coming from FC Dallas by a 3-0 scoreline. RSL will be on the road again as they try to turn it around against the Revs in the cold of New England this weekend.

OUTLOOK: Winless no more! After building on small successes in their past few matches, the Union put it all together on Saturday as they trounced the Red Bulls by a 3-0 scoreline. C.J. Sapong played the hero with a second-half hat trick, and now takes his show on the road as the Union battle D.C. United at RFK Stadium this weekend.

LAST WEEK: Lost to the Vancouver Whitecaps, 1-0, on Friday.

OUTLOOK: The Colorado Rapids have taken on the mantle of basement-dwellers from the Philadelphia Union after their latest defeat to the Whitecaps, 1-0 on Friday. It’s the Rapids’ fifth straight and drops them to four points through eight matches this year. They’ll need to figure out how to improve a league-worst five total goals this year to earn a result against the Quakes at home this Saturday.