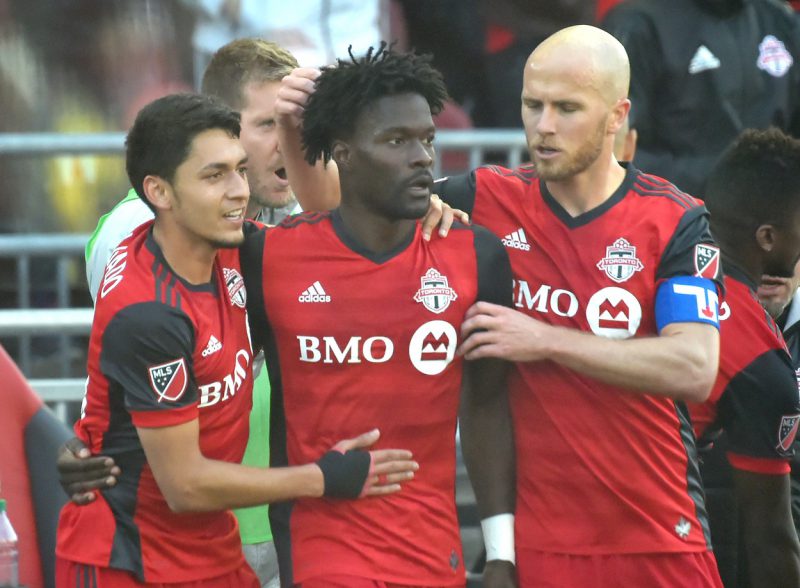 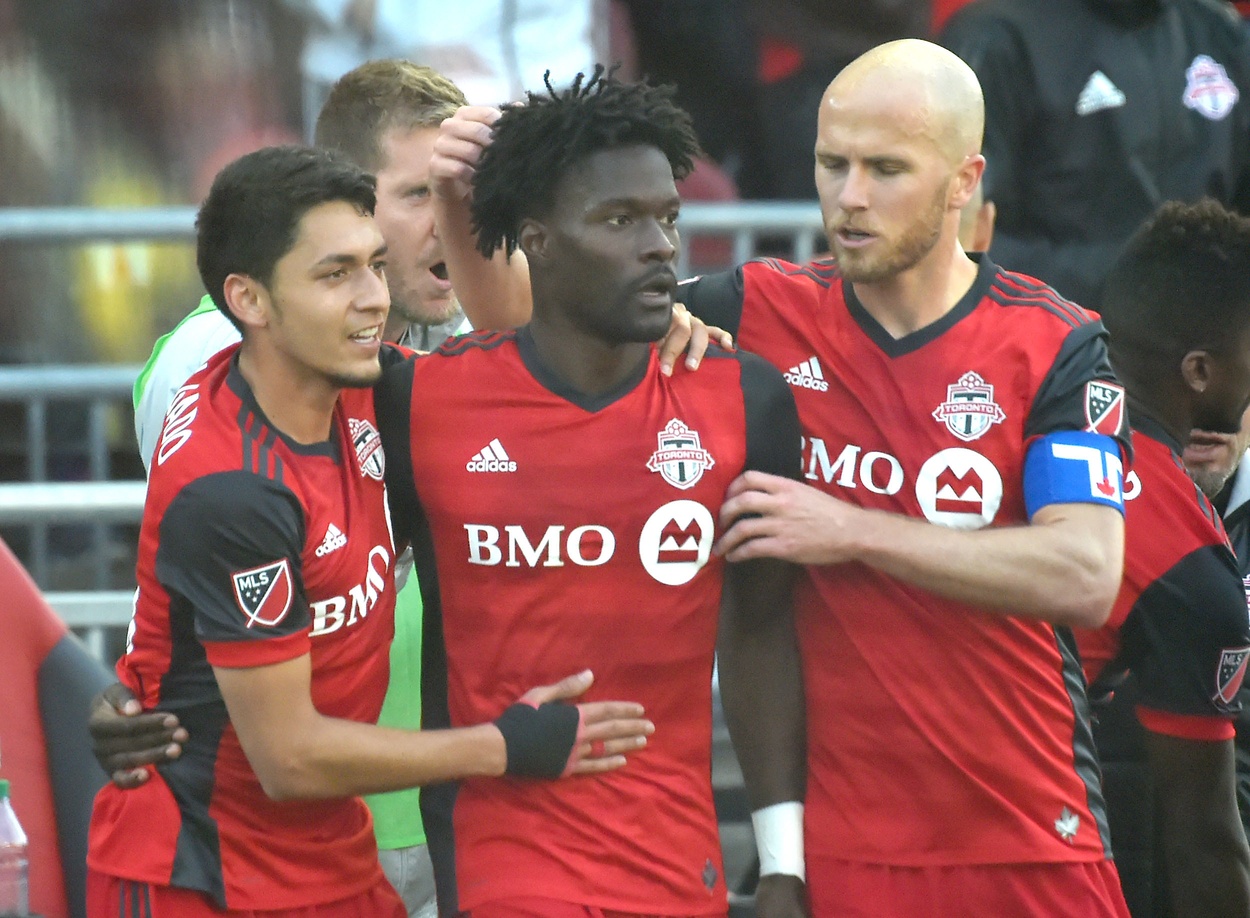 FC Dallas is still the lone undefeated team in Major League Soccer, but Oscar Pareja’s men have lost their grip on the top spot in the latest SBI MLS Power Rankings.

That spot belongs to red-hot Toronto FC, which pushed its winning streak to six matches to put a stranglehold on first place in the Eastern Conference. Greg Vanney’s team has won four matches in two weeks, showing off unmatched depth to cope with the fixture congestion.

The Philadelphia Union continued to climb after finally escaping the bottom of the rankings last week. Jim Curtin’s men have posted three straight shutouts and two big blowout wins to take a few more steps up in the latest rankings.

Another big mover this week are the LA Galaxy, which posted a big road win at Red Bull Arena to start looking like the team we expected when the season began.

THIS WEEK: at New York Red Bulls on Friday

OUTLOOK: Nothing seems to be slowing the Reds down at the moment. They outlasted expansion side Minnesota United at home on Saturday to keep their commanding lead in the Supporters’ Shield and Eastern Conference races. A road trip to Red Bull Arena that usually phases teams might not be that much of a challenge for a team with a 3-1-2 road mark.

THIS WEEK: vs. San Jose on Saturday

OUTLOOK: Oscar Pareja’s side is still unbeaten through nine games, but there’s no doubt disappointment is lingering after the 1-1 draw with NYCFC on Sunday that took FC Dallas out of first place in the Western Conference for the time being.

OUTLOOK: Full credit to NYCFC for going into Frisco and earning a point off a gritty goal by Thomas McNamara. Patrick Vieira’s men are now unbeaten in their last three games, but a tricky test in Orlando awaits on Sunday.

THIS WEEK: vs. Seattle on Wednesday, at Vancouver on Saturday.

OUTLOOK:  Sporting Kansas City pulled off the rare task of earning a point in Orlando City Stadium as the visiting team to rebound from their defeat in Minnesota. Another two-game week awaits Sporting KC this week, with the travel to Vancouver on short rest being the biggest thing going against them.

THIS WEEK: at Philadelphia on Wednesday, at Atlanta on Saturday.

OUTLOOK: To the surprise of many, the Houston Dynamo are on top of the Western Conference standings in May, but that may change as they leave the comforts of BBVA Compass Stadium for a pair of games this week. Houston has a 0-3-0 road mark entering clashes with the Union and Atlanta United.

THIS WEEK: at San Jose on Wednesday, vs. New York City FC on Sunday.

OUTLOOK: Orlando City dropped its first points at home on Saturday against Sporting Kansas City. Although it wasn’t a loss, it was still a disappointing result given the early form of the Lions in their new digs. The always unfriendly short week road trip to San Jose starts Orlando’s week before the high-profile clash against NYCFC on Sunday.

THIS WEEK: at Montreal on Saturday.

OUTLOOK: The Timbers haven’t been stellar on the road in 2017, but they’ll have a chance to reverse their fortunes on Saturday against Montreal, who has already lost a pair of games at Stade Saputo. Keeping momentum heading into next weekend’s Cascadia Cup clash with Seattle is key for Caleb Porter’s men.

THIS WEEK: at New England on Sunday.

OUTLOOK: Justin Meram’s phenomenal start to the season continued with a hat-trick in the win over Montreal in Week 11. Now the Crew have eight days to prepare for their trip to New England on Sunday. Columbus is one of eight teams in MLS entering Week 12 with a pair of road victories in a league many say is difficult to play in away from home.

THIS WEEK: vs. Colorado on Wednesday, at D.C. on Saturday.

OUTLOOK: Maybe the Fire are for real after all. Chicago caught headlines for its surge after the Bastian Schweinsteiger acquisition, and despite dropping two in a row, the Fire have responded with a draw in LA and a win over the Sounders. If they are a contender, the Fire should easily run through Colorado on Wednesday and earn at least a point against a D.C. side mired in a funk.

THIS WEEK: vs. Houston on Saturday.

OUTLOOK: The perfect combination of factors should set Atlanta United up for a victory in Week 12 at Bobby Dodd Stadium. Tata Martino’s men are winless in three, but they’ll have a full week to rest and will catch Houston, a team that’s terrible on the road, on short rest. Saturday could be the confidence-builder this team needs right now.

THIS WEEK: at Sporting KC on Wednesday, vs. Real Salt Lake on Saturday.

OUTLOOK: Seattle is in a funk with one win since March 19. Things may not turn around at the start of the week in Kansas City, but an appetizing match presents itself on Saturday when struggling Real Salt Lake come to CenturyLink Field.

THIS WEEK: vs. Toronto on Friday.

OUTLOOK: The Red Bulls are on a downward spiral with no end in sight, at least if you believe the club’s fans. New York has dropped three consecutive matches and high-flying Toronto FC comes to town on Friday night. It’s the perfect recipe for a fourth straight loss, which means the Red Bulls will probably win by two goals since this is MLS after all.

THIS WEEK: vs. Orlando City on Wednesday, at FC Dallas on Saturday.

OUTLOOK: It’s never a good look for a club when it loses by three goals to the worst team in the league, but that’s life in MLS. San Jose’s strong run of form was killed by a loss to the Rapids, but a quick fix is in sight with Orlando coming to town on Wednesday. The Lions should rest a few players with NYCFC coming to town on Sunday, so that should hand the Quakes a chance to win their third in four games.

THIS WEEK: at Minnesota on Sunday.

OUTLOOK: All of a sudden, the Galaxy are starting to look like a functional soccer team again. After two straight draws at home, the Galaxy rose to the occasion and downed the Red Bulls in New Jersey on Sunday. LA has more wins on the road than at home, and it has a chance to earn road victory No. 3 in Minnesota in Week 12.

OUTLOOK: The Vancouver Whitecaps took their lumps on the road last weekend in Houston, but overall the club’s four-game road trip can be seen as a good one with wins over Montreal and Colorado. The sixth-place team in the West plays its next four games at home, a stretch that could help the Whitecaps jump higher up the standings.

THIS WEEK: vs. Columbus on Sunday.

OUTLOOK: The Revolution did what any team is supposed to do against a beaten-up opponent: win big. The Revs thrashed Real Salt Lake for a quartet of strikes on Saturday to finally regain some positive momentum with the second-place Crew coming to town this weekend.

THIS WEEK: vs. LA on Sunday.

OUTLOOK: Minnesota deserves some credit for going into BMO Field and scoring twice before falling to red-hot Toronto FC. The Loons have alternated wins and losses in the last four weeks, but they’ll have to fight to get back in the win column against a suddenly motivated LA Galaxy.

THIS WEEK: vs. Houston on Wednesday, vs. Colorado on Saturday.

OUTLOOK: The win over the Red Bulls a week ago was the turning point for the Union, who trounced D.C. United 4-0 on Saturday night. What’s even more impressive about Jim Curtin’s side at the moment is the defensive success, led by 35-year-old Oguchi Onyewu and fourth-round draft pick Jack Elliott, who have built up a 273-minute shutout streak.

THIS WEEK: vs. Chicago on Saturday.

OUTLOOK: The last two weeks have been nothing short of miserable for D.C. United. The Black and Red have dropped games at home to Montreal and Philadelphia, and it doesn’t get any easier with the Fire in town on Saturday. Ben Olsen needs to see a positive response out of his team on Saturday, and if not, it could be a long few weeks heading into the international break.

THIS WEEK: vs. Portland on Saturday.

OUTLOOK: Montreal hasn’t been able to find any sort of rhythm in 2017. After beating D.C. on the road, the Impact fell to the Crew at home. Mauro Biello’s men will try to correct their poor home form against Portland on Saturday, but there’s no guarantees given the way they’ve played.

THIS WEEK: at Chicago on Wednesday, at Philadelphia on Saturday.

OUTLOOK: Colorado ended a five-game losing streak and seven-game winless run on Saturday against the Earthquakes. The reward for a nice win at home? Two games on the road against in-form Eastern Conference teams. A point or two out of Week 12 will be seen as a solid result for the Rapids, who might just have to limit their losses before returning home on May 27.

THIS WEEK: vs. NYCFC on Wednesday, at Seattle on Saturday.

OUTLOOK: Real Salt Lake have been outscored 10-0 in their last three games, and there appears to be no end in sight for their miserable form. A return home to face New York City FC won’t be an easy task to recover points and neither will Saturday’s trip to Seattle.