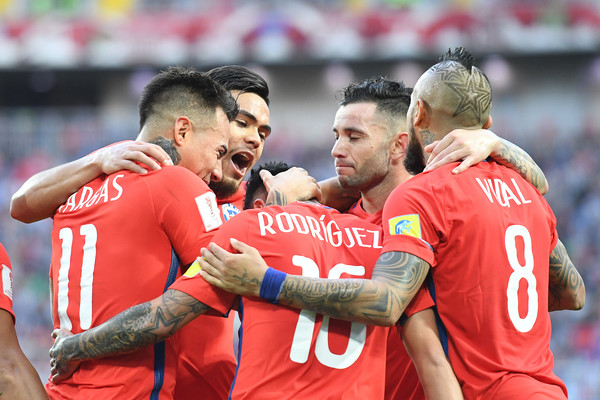 The Confederations Cup semifinals are finally set, and they should be thrilling.

Germany and Chile booked their spots in the semis on Sunday, joining Portugal and Mexico in the knockout stage.

Chile’s semifinal aspirations appeared to be in doubt, though, as it trailed 1-0 to Australia at halftime, but eventually salvaged a 1-1 draw to wrap up second place in Group B. That result means the Copa America winner will face the European champion Portugal in the semis on June 28.

James Troisi opened the scoring in the 42nd minute for the Socceroos after a beautiful counterattack. Australia nearly doubled its advantage just moments later through Tim Cahill, who was celebrating his 100th appearance for his country. However, Cahill blasted his shot over the bar, to the relief of goalkeeper Claudio Bravo.

Eventually, Chile found the equalizer as Martin Rodriguez bagged his first goal for his country to secure La Roja’s spot in the next round. The Aussies finished third in the group with two points, needing at least a two-goal victory over the Chileans to advance to the semis.

Chile’s draw meant that Germany, despite leaving several first-team regulars behind for this tournament, claimed top spot in Group B after cruising past 10-man Cameroon with a 3-1 win.

The Germans will now face Mexico on June 29 in Sochi. Germany has not lost any of the last five meetings against El Tri.

Kerem Demirbay’s sensational strike gave Germany the lead early in the second half. However, the game will be remembered for yet another incident involving VAR. After Sebastien Siani was wrongly sent off for a challenge on Emre Can, referee Wilmar Roldan checked the monitor and realized Siani was not the culprit. Ernest Makouba was correctly given the red card and the issue was resolved.

The world champions took a 2-0 lead shortly thereafter thanks to a diving header by Timo Werner. Vincent Aboubakar cut the lead in half, but Werner responded just three minutes later to seal the victory. The RB Leipzig forward is now tied for the tournament lead with two goals along with Cristiano Ronaldo and teammate Lars Stindl.