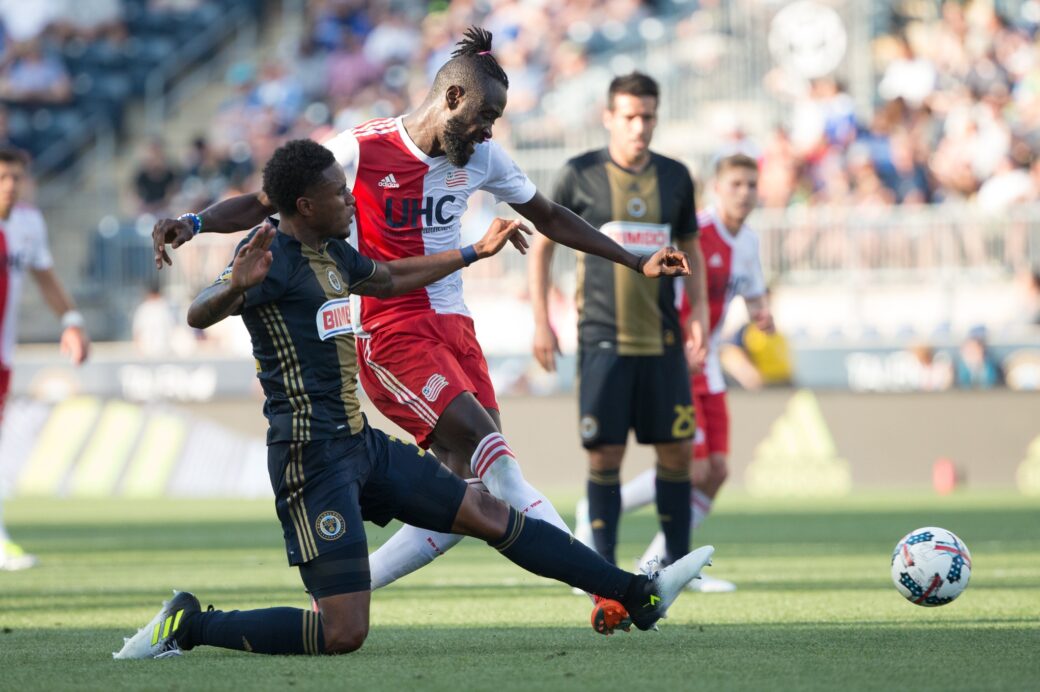 Coming into Sunday’s Eastern Conference showdown with the Philadelphia Union, it was always going to be tough for the New England Revolution.

Jay Heaps’ side were coming off back-to-back league defeats against two of the league’s heavyweights, despite a U.S. Open Cup victory against D.C. United midweek. A trio of starters were missing as well with Juan Agudelo and Kelyn Rowe out with the USMNT, while Diego Fagundez was suspended.

90+ minutes later, the Revolution remained winless on the road, after falling, 3-0, at Talen Energy Stadium on Sunday. The Revs conceded a goal early in each half, while a wonder strike from Roland Alberg sealed their fate later in the second-half.

The poor start took only four minutes as Revs defender Benjamin Angoua was whistled for handball inside the box. C.J. Sapong stepped up and blasted home the ensuing penalty kick, giving the hosts a 1-0 lead.

Despite having chances towards goal, the Revolution were clearly off their game. The Union doubled their advantage three minutes into the second-half as Ilsinho chipped the ball over Cody Cropper into the left side of the goal.

However, the Revolution’s best chance came just minutes after as Je-Vaughn Watson struck the post from close range. It looked as if the visitors were going to get back into the match, but Alberg slammed the door on any late drama. The midfielder rifled home from 30+ yards out, a minute after coming onto the pitch which stamped the final score at 3-0.

“We’re giving up games right now. We need to be tighter, sharper, and smarter which we’re lacking in all those capacities,” said Heaps.

The Revolution created three chances towards goal in Sunday’s loss, while the Union easily could have handed them a much worse result. Fafa Picault had a few chances miss from inside the box, while the Union’s team chemistry was clicking on all cylinders.

The defeat dropped the Revolution (5-5-8) into tenth place in the Eastern Conference with only 20 points so far this season. Their road form has been horrid this season, sitting at an (0-3-7) mark in 10 matches.

A positive is that the Revolution do return to Gillette Stadium for three league matches, and a U.S. Open Cup quarterfinal, something Brian Wright feels could turn the season around.

“It’s huge. We definitely need to start picking up some points, we show a strong intensity at home, and we need to show it,” said Wright.

Wright made his MLS debut on Sunday after scoring the winner in the Revolution’s Open Cup victory last Wednesday. The 2017 first-round pick came on as a 53rd-minute substitution replacing wingback Donald Smith.

For the Revolution, players will need to step up in the absence of their three starters. Lee Nguyen and Kei Kamara are two playmakers offensively, and will be looked at to pick up the slack.

It will be a quick turnaround for the Revolution, who begin their four game homestead with a league fixture against the New York Red Bulls on July 5th. Also, in the month of July they host the Red Bulls in a U.S. Open Cup quarterfinal, before welcoming both the LA Galaxy and the Union to Gillette Stadium.

“We’re at a point of the season where you cannot drop points, so we will have to turn it around quickly and get ready for Wednesday,” said Smith.