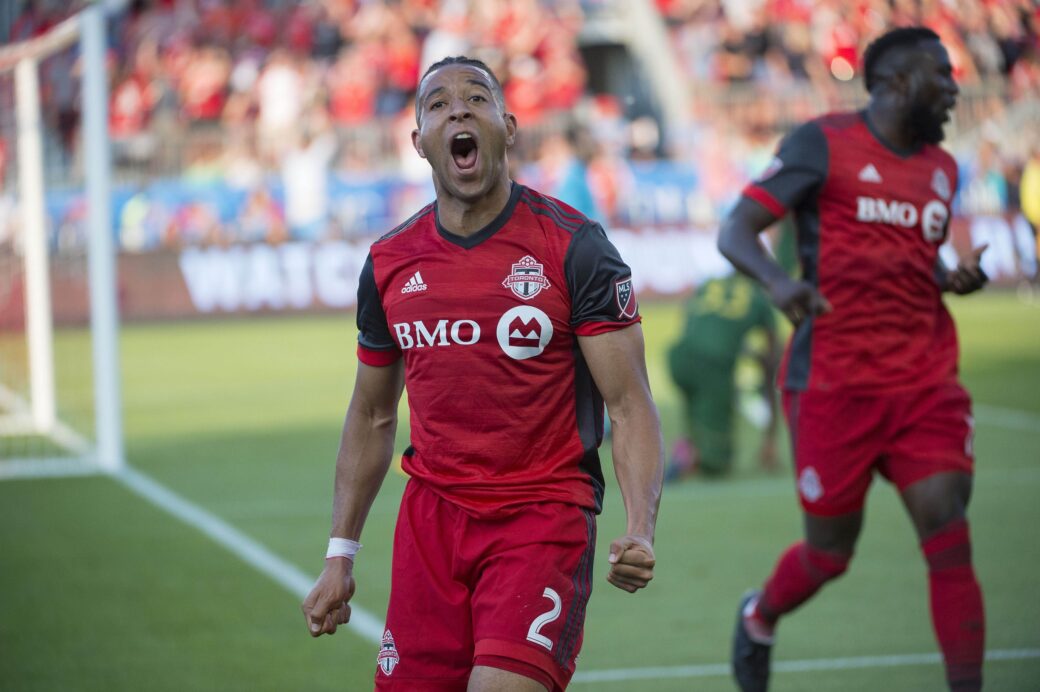 After a slow first half, three goals scored in the span of 18 minutes were enough for Toronto FC to run away with a ninth home win in 2017.

TFC was far from deadly in the first 45 minutes, but a dominant second half saw the Canadian side cruise past the Portland Timbers, 4-1. In the result, TFC fullback Justin Morrow recorded his first career two-goal game.

Early in the game two starters from both team left the game on injury. At the 18th minute, Jake Gleeson, while making a save, immediately signaled for a substitution. The goalkeeper was subbed off for Jeff Attinella over a hamstring injury.

One minute later TFC suffered the same fate. Nick Hagglund sprained his left knee while tackling Darren Mattocks and was forced to come out for Jason Hernandez.

It took just under one hour at BMO Field to get an opening goal. At the 58th minute, Jozy Altidore found Sebsastian Giovinco on the right flank with a long ball. From the flank, Giovinco crossed the ball in the 18-yard box but was intercepted by Alvas Powell.Wanting to take it out of his own end, Powell got the ball taken away by Justin Morrow who had the space on the left side of the box to shoot in the higher netting and open the score for TFC.

From there, the floodgates opened for the Reds. At the 72nd minute, Marky Delgado found Giovinco with a through pass of his own on the right side of the 18-yard box. The Italian got his sixth assist of the season with a centring pass for Victor Vasquez who tapped in his fifth goal of the season.

Morrow then added a third goal for TFC in a sequence of back heel passes at the 76th minute. Vasquez, at the top of the box, gave a back heel pass for Altidore who left the ball for Giovinco. The Italian made a back heel pass that was going to be for Altidore but a Timbers defender deflected the ball onto Morrow’s way and did not miss the opportunity to score his second goal of the night.

A fourth goal came TFC’s way at the 87th minute as Giovinco found Tossaint Ricketts with a through pass along the middle of the field. Ricketts was tackled by Alvas Powell but the ball fell to Marky Delgado who shot passed Attinella to give yet another goal to the BMO Field crowd.

Late in the game, Diego Valeri single-handedly ruined Toronto FC’s clean sheet. The Argentinean made his way from about 25 yard out along the middle, beat three defenders and shot passed Alex Bono to score the Timbers’ lone goal.

With a ninth home win, Toronto FC surpass the number of home win from the 2016 regular season total of eight.

Justin Morrow recorded his first two-goal game in MLS in a great showcase of offensive talent. The Cleveland native was at the right places at the right time to open the score after 28 minutes and knocked the last nail in the Timbers’ coffin with TFC’s third goal.

On the end of a backheel pass from Sebastian Giovinco that was deflected from a Timbers defender, Justin Morrow beat Jeff Attinella to grab his second goal of the night, a first for U.S. international in MLS.

Alvas Powell was overworked in the second half by a changed Toronto side at halftime. The right back was outplayed by Justin Morrow. He did not fare up on the right side with Morrow scoring two goals and let in Delgado’s late goal following his tackle on Ricketts.