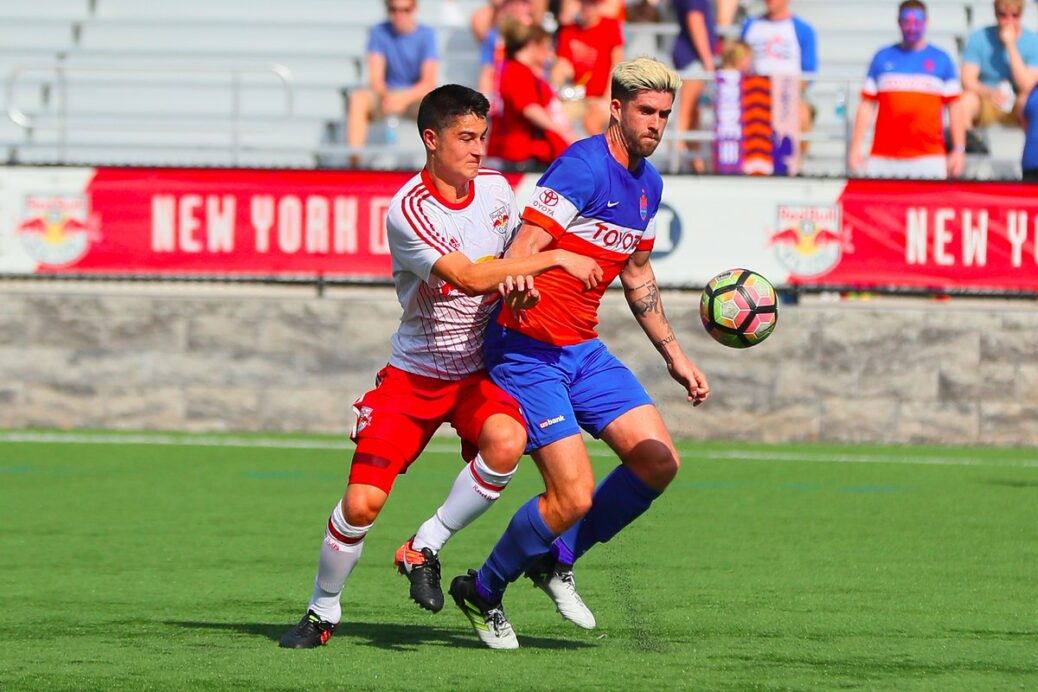 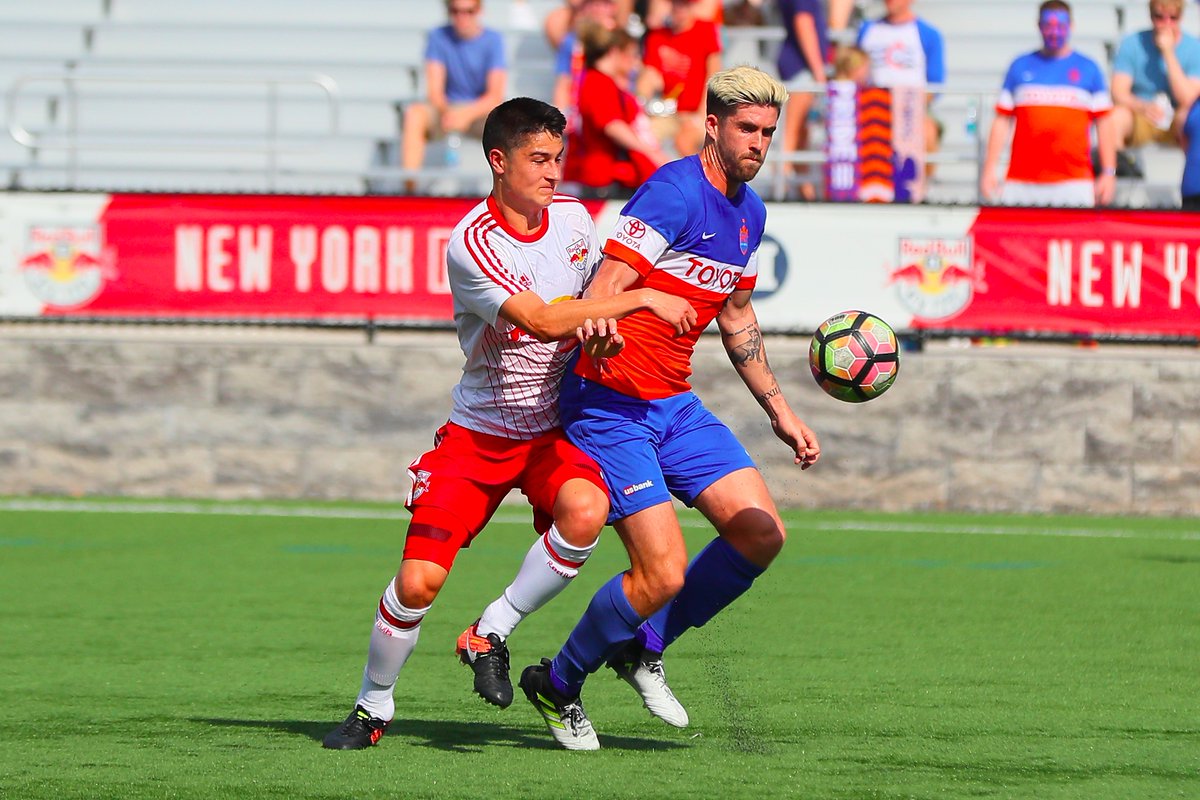 New York Red Bulls II grabbed a statement win over a weary FC Cincinnati by scoring twice after going a man down for a convincing 4-0 win.

For Cincinnati, it was their second defeat to the Red Bulls organization of the week after dropping the U.S. Open Cup semifinal to the Red Bulls senior team. While the weekend loss can be taken with a bit of a grain of salt due to fatigue and poor road form, Cincinnati will need to find their form if they are to make a playoff appearance in 2017.

Elsewhere, the Charleston Battery and Louisville City grabbed wins and put the pressure on leaders Charlotte Independence to maintain their top dog status.

Let’s take a look at all the weekend action:

The Rangers grabbed a late equalizer Friday night against the Monarchs for their third consecutive draw.

The Monarchs got to work early, scoring in the 8th minute through Daniel Haber from a free kick. Kyle Curinga doubled the lead in the 26th minute off a Andrew Brody cross following a corner. The Rangers nearly pulled a goal back before the half from a corner, but Monarchs goalkeeper Matt Van Oekel saved the flick to the near post. After the break, Nansel Selbol fired in a shot from over 20 yards out into the top corner in the 60th minute. Kharlton Belmar finished off a low cross from Tyler Pasher in the 82nd minute to rescue the point.

Los Dos picked up their sixth win of the season on the road against the Switchbacks on a late own goal from Sean McFarlane in the 87th minute.

After a scoreless first half, Ariel Lassiter cut inside the box from the left side before finishing to the far post in the 52nd minute. Jack Jones helped the home team equalize with a heads-up play to let a Kevaughn Frater pass run past him to be met by Aaron King for an easy finish in the 77th minute. The loss sees the Switchbacks fall to seventh place in the Western Conference.

OCSC left it late against Phoenix Rising, scoring the equalizer in the 89th minute, opening their new stadium with a thriller.

Former OCSC player Chris Cortez opened the scoring for Phoenix in the 18th minute, capitalizing on an error from goalkeeper Charlie Lyon. With a minute to go, Jerry van Ewijk crossed to Sola Abolaji for a header at the far post. The draw was important for OCSC as it prevented Phoenix from leaping them in the standings, and kept OCSC at playoff pace with games in hand.

After their midweek heartbreaking U.S. Open Cup exit against the New York Red Bulls, Cincinnati came out tired and flat. Despite having the first good look in the game, Cincinnati went behind in the 23rd minute on a penalty kick to Stefano Bonomo. Just before halftime, Hassan Ndam headed home a Zeiko Lewis free kick for his first professional goal. Ndam picked up two yellow cards early in the second half, leaving NYRBII down a man. The numbers advantage did not seem to bother them much as they scored two goals in quick succession thanks to Junior Flemmings. Cincinnati let their tempers flare after conceding the final two goals, and Josue earned a second yellow card as well, leaving the teams even at 10-men a side.

The win pushes the Red Bulls back into a playoff spot, leaping Cincinnati in the standings on the number of wins tiebreaker.

The Battery snapped their seven-game winless streak on a Justin Portillo goal against the Rhinos.

A wide-open game found the goalkeepers busy with shots throughout the match. With seven minutes to go, Justin Portillo fooled the goalkeeper with a low free kick that missed everyone in the box and found the far post. Unable to find an equalizer, the Rhinos dropped their second match in their last three games.

With the win, the Battery get themselves right back in the race for the top spot in the Eastern Conference.

OCB took another step forward in their late season revival by earning a vital road draw against the Eastern Conference leading Independence.

Hadji Barry opened the scoring with a 5th minute penalty kick. The Independence wasted no time responding, scoring just two minutes later when David Estrada cleaned up a loose ball in the box. The rest of the match was a chess match between the teams, with neither finding the go-ahead goal.

The Independence stay in first place with the draw leading Louisville City and the Charleston Battery by three points.

The Kickers overcame an early goal to defeat TFCII for their fourth win of the season.

Jordan Hamilton scored in the 4th minute for the visitors off a free kick, only to see the goal canceled out one minute later. Sunny Jane turned his header into the net on a cross from an Alex Lee cross. TFCII and the Kickers traded blows through the rest of the first half and second half before Matthew Bolduc scored the winner in the 68th minute. The Kickers and TFCII have traded last in the Eastern Conference for much of the season.

With the win this weekend, the Kickers move above TFCII but remain 11 points back of a playoff spot.

The Fury kept pace with the playoff race with a gutsy draw on the road against the recently hot Rowdies.

Steevan Dos Santos opened the scoring in the 3rd minute on a low shot from 20-yards out. The Fury nearly doubled the lead but Andae Cambell failed to hit the target from a tigh-angeled shot. Georgi Hristov took advantage of the wasteful finish and equalized in the 11th minute, firing home a missed clearance. The Fury continued to create strong attacking opportunities, but Matt Pickens kept the game level with a number of big saves.

With the draw, the Fury sit three points back from a playoff spot while the Rowdies stay in fourth place.

Diego Restrepo and Cody Laurendi stood tall for their teams in a spirited 0-0 draw in Oklahoma City for OKC and SAFC. Jose Angulo tested Restrepo on a number of occasions, but failed to convert his opportunities. On the other side, SAFC’s Shawn Chin and Michael Reed both tested Laurendi but the keeper was up to the challenge. With the draw, OKC remains a point ahead of Seattle Sounders FC 2 for the final playoff spot in the Western Conference. SAFC remain in second place, ten points back from leaders Real Monarchs SLC.

The Toros kept their playoff hopes alive striking a late equalizer over the Whitecaps 2. The visitors took the lead in the 23rd minute when Deklan Wynne made a late run and latched onto a pass from Gloire Amanda. The Whitecaps 2 kept the pressure up through the first half, but failed to add to their lead. In the 70th minute, recent signing Justin Bilyeu laid back a cross from Eric Bird to TJ Casner. Casner stepped up and struck the ball low for the goal. The Toros nearly found the lead when Francisco Pungo attempted to put home a rebound, but missed the open net. The draw leaves the Toros three points back from a playoff spot.

Corey Hertzog’s second half double powered the Riverhounds over STLFC.

Seth Rudolph scored the opener just before the break on a back heel from Christian Volesky in the 45th minute. The riverhounds wasted no time in getting back into the game, scoring first in the 47th minute on a free kick from Hertzog. STLFC had a golden opportunity to retake the lead from the penalty spot in the 65th, but Trey Mitchell saved the poorly taken penalty kick from Milan Petosevic. The Riverhounds would not waste their opportunity from the spot just eight minutes later.

The Riverhounds keep pace with the rest of the playoff hopefuls, sitting just a point back from the final spot currently occupied by the New York Red Bulls II.

Reno continued their impressive season with a come from behind win over Sac Republic.

Hayden Partain’s flicked header opened the scoring in the 15th minute for the home side. Two minutes later, Dane Kelly equalized for the visitors with his own header on a Nick von Niederhausen cross. For Dane Kelly, the goal was his USL leading 16th of the season. Reno would not have to wait long to score the winner. It took them just five more minutes for Chris Wehan to bend in his free kick for the game winning effort.

Sac Republic continued to chase the game and look for opportunities, but stout defending and goalkeeper kept Reno ahead to the final whistle.

Louisville moved to within three points of the Eastern Conference leading Charlotte Independence with a big away win over Bethlehem Steel.

Luke Spencer scored a first half brace with goals in the 17th and 26th minutes. Richie Marquez nodded in an Aaron Jones free kick in the 41st minute to pull one back for the home side. Santi Moar almost pulled Steel level in first half stoppage time, but Greg Ranjitsingh made a big kick save on the shot which Louisville cleared before further danger. Ranjitsingh came up big for Louisville a number of times in the second half allowing Cameron Lancaster to score an insurance goal and give Louisville the win.