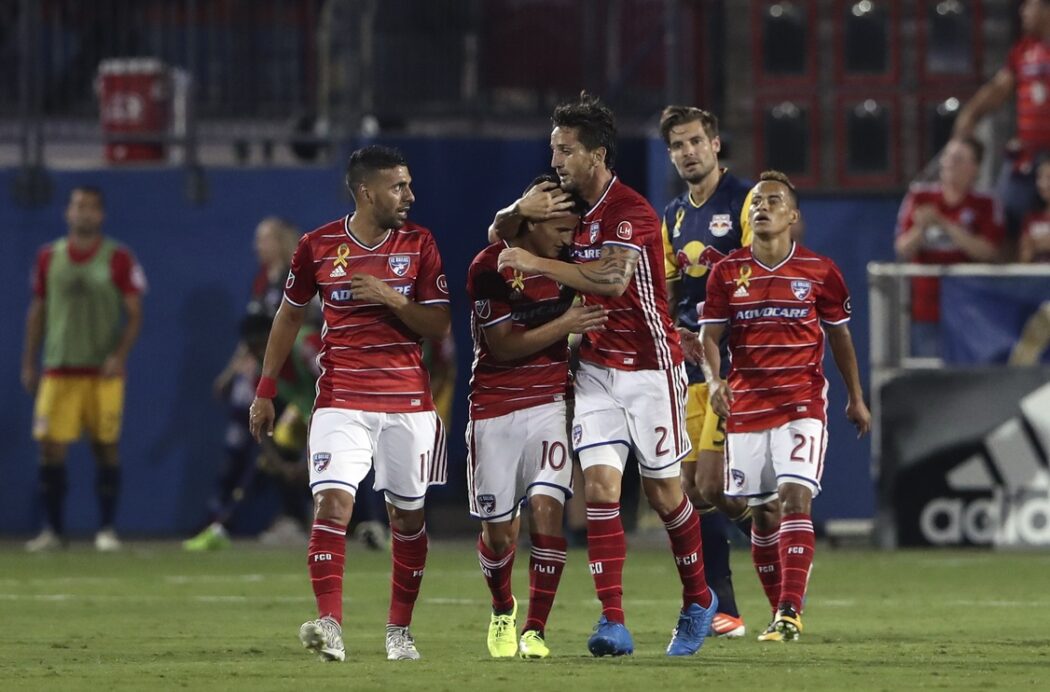 When a team is reduced to 10 men, one of two things can happen. Either that team could give up and look towards the next match, or fight and make the most of a dismal opportunity.

FC Dallas fought its way back twice at home on Saturday evening, overcoming a red card and two deficits to earn a point in a 2-2 draw against the New York Red Bulls at Toyota Stadium.

The Red Bulls made the hosts pay just six minutes after Hayes’ ejection, with Sacha Kljestan delivering a right-footed finish in the 43rd minute to open the scoring. It was Kljestan’s second goal of the current season.

FC Dallas battled back and found an equalizer in the 54th minute when Hernan Grana’s left-footed effort from inside of the box beat Luis Robles.

Aaron Long put the Red Bulls back in front in the 57th minute, heading home Kljestan’s cross on a set piece for his first goal of the season.

Robles denied Michael Barrios in the 61st minute.  Despite being a man down, Oscar Pareja’s side looked for another equalizer and found it in the 75th minute.

Connor Lade was whistled for a penalty after fouling Barrios in the penalty area. Mauro Diaz stepped up and smashed the ensuing spot kick into the top left corner to tie the score.

Walker Zimmerman and Cristian Colman tried to play the hero role in stoppage time, but Robles made a pair of saves to keep the final score at 2-2. Robles made four saves, while Jesse Gonzalez made one.

Kljestan scored the Red Bulls’ first goal and set up the team’s second. The 31-year-old completed 55 passes, which was the most by any Red Bulls player in Saturday’s match.

After tying the match up for a second time, FC Dallas was the team more likely to find a winner. Late pressure looked like that would happen, and it would have if not for a pair of saves from Luis Robles. The 33-year-old keeper saved a point for his team.

FC Dallas midfielder Ronald Lamah was quiet in Saturday’s match, failing to record a shot on goal and only lasting 45 minutes. The 29-year-old has been a key scorer for Pareja’s side, and will need to get back to form and fast.