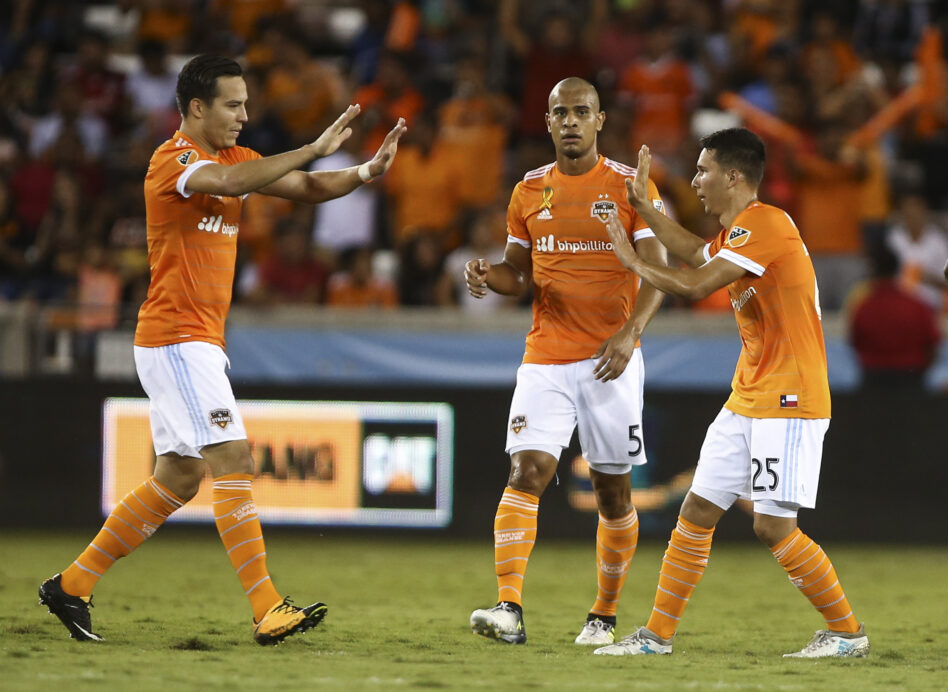 Thanks to a furious Houston Dynamo comeback, the LA Galaxy will officially miss out on the MLS Cup Playoffs for the first time in nine years.

Alberth Elis scored twice in the final minutes to bring the Dynamo back from down two goals late in the match to earn a 3-3 draw at home against the Galaxy.

LA got themselves off to a lucky start in the opening minutes of the match. Romain Alessandrini swung a corner into the box all of two minutes into the game and the Dynamo’s failed clearance slammed off left back DaMarcus Beasley and into their own goal.

The second goal came from a bit more skill less than ten minutes later. Ashley Cole hit Alessandrini mid-stride as he darted into the penalty area and easily slid a shot past Tyler Deric in the 12th minute.

The Dynamo began to control possession after the two early goals. While this did put their counterattacking style aside, they did get the next great chance of the game. Rommel Quioto cut inside from the left flank in the 18th minute and proceeded to smack a shot off the left post.

They would get their first goal in the 26th minute as a well-placed shot from Tomas Martinez evaded a diving Clement Diop to make it 2-1.

The chances kept flowing for the Dynamo, but nothing came for the rest of the half. Quioto had the best of them when he thought he stole the ball from Hugo Arellano at the edge of the penalty area, but he was whistled for a foul as he tapped the ball into the empty net.

The Galaxy started the second half as fast as they did the first. Bradford Jamieson smashed home a first time shot off a pass from Giovani dos Santos less than two minutes after the restart.

Houston kept pressuring for the remainder of the match, but any chances before the final ten minutes were stifled by near misses and some poor luck in shooting. The did pull back within a goal in the 84th minute when Elis was hauled down in the penalty area by Arellano, who was lucky to escape without receiving a second yellow card. Elis proceeded to confidently fire the spot kick home to close the gap.

Dynamo coach Wilmer Cabrera was furious by the lack of a yellow on that penalty, and no second yellow shown to Diop, who wrestled with Elis in the net, preventing the Dynamo forward from getting play restarted after the goal.

Elis would head home the equalizer at the 88 minute mark off a Dynamo corner. He evaded Gyasi Zardes at the top of the six yard box to rise to the ball and pop it inside the far post.

The Dynamo will use the point to climb within one of Dallas for the final Western Conference playoff spot. They host Minnesota United this Saturday in their next chance to get above the red line.

LA, meanwhile, remains mired in tenth place, and out of playoff contention. They will miss the playoffs for the first time since 2008. They return to StubHub Center on Saturday to play Real Salt Lake.

Alberth Elis stole a point for the hosts with a finish from the penalty spot and a well executed header in the final ten minutes.

Elis’s header in the 88th minute completed the late comeback and earned Houston a big point in a tight Western Conference playoff race.

Clement Diop had a mistake filled night in the Galaxy goal. He probably could have stopped their opener and was lucky Houston’s shooting was suspect throughout the night. He easily could have conceded more than three goals.