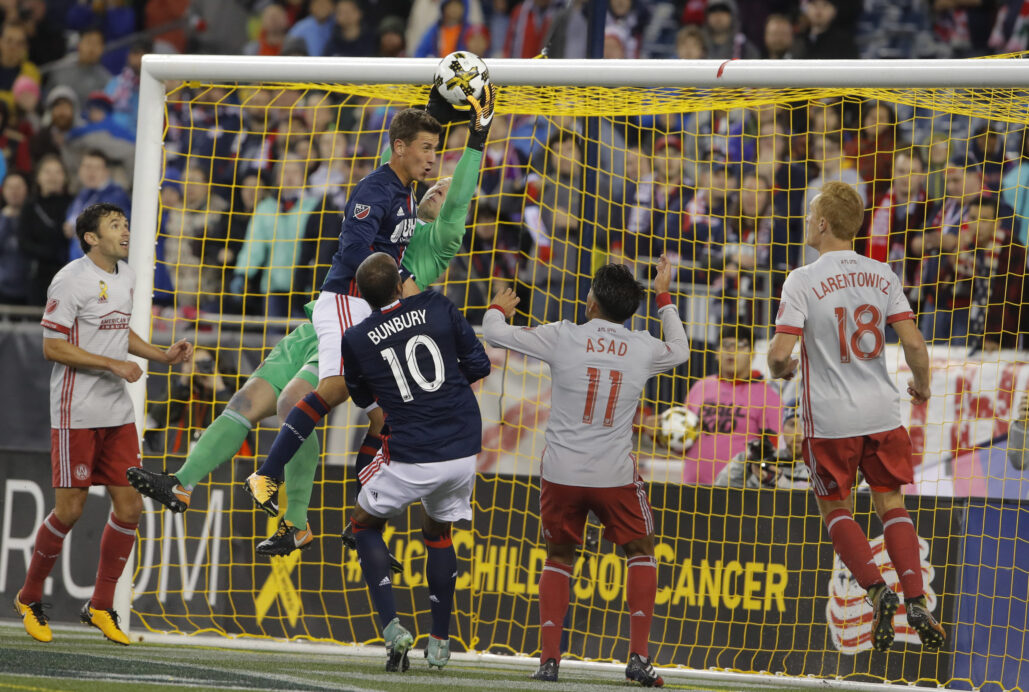 In the first ever meeting between Atlanta United and the New England Revolution just over two weeks ago, the Five Stripes tied an MLS record with a seven-goal margin of victory over the Revs.

The rematch was a far more subdued affair as Atlanta United and the Revolution settled for a 0-0 draw at Gillette Stadium.

The Revs (11-15-6) had 14 shots to Atlanta’s seven and controlled nearly 60% of the possession but couldn’t find a goal. The result leaves New England all but eliminated from the playoff picture.

Revolution goalie Cody Cropper made an 18th-minute save on Josef Martinez on a 2-on-1, while Atlanta’s Brad Guzan (five saves) stopped Diego Fagundez in the box in the 22nd minute to help keep it scoreless at halftime.

Lee Nguyen had a dangerous free kick from about 30 yards out diagonally left of goal in the 87th minute that forced Guzan into a diving save to push it off the crossbar and away from danger.

The Revs had a last-gasp chance in the fourth minute of stoppage time as Lee Nguyen served in a free kick that Juan Agudelo headed up into the air and into the arms of Guzan to seal the final result.

Atlanta United star Miguel Almiron did not play on Saturday. while the Revs’ Xavier Kouassi was available after having last week’s red card rescinded, but the Revolution only used two substitutions and did not bring him on.

Atlanta (15-8-7) has a quick turnaround, hosting Minnesota United on Tuesday night before finishing out against the New York Red Bulls and Toronto FC. The Five Stripes are still jockeying with New York City FC and the Chicago Fire for the two through four seeds in the Eastern Conference.

The Revolution have a week off before hosting NYCFC and then wrapping up the regular season the following weekend up at Stade Saputo against the Montreal Impact. The Revs are 0-13-3 on the road this season.

Revolution defensive midfielder Scott Caldwell had an industrious game, leading all players with 92 touches and an efficient 63 out of his 68 passes. Caldwell also tied Atlanta’s Jeff Larentowicz winning a game-high five tackles, but the Revs couldn’t convert his efforts into a goal.

Guzan looked solid as the Revolution pushed forward for a goal in the final minutes and his 87th-minute save on Nguyen took some wind out of the hosts’ sails, as he showed he wasn’t going to let an easy one in.

Martinez had been on a hot streak, scoring nine goals in the previous six matches, but he was relatively quiet on Saturday, with only 21 touches the entire game. Part of it seemed strategic as Atlanta looked content to settle for the 0-0 result, but just two goals off Diego Valeri for the MLS lead, Martinez’s chances at the MLS Golden Boot took a hit.