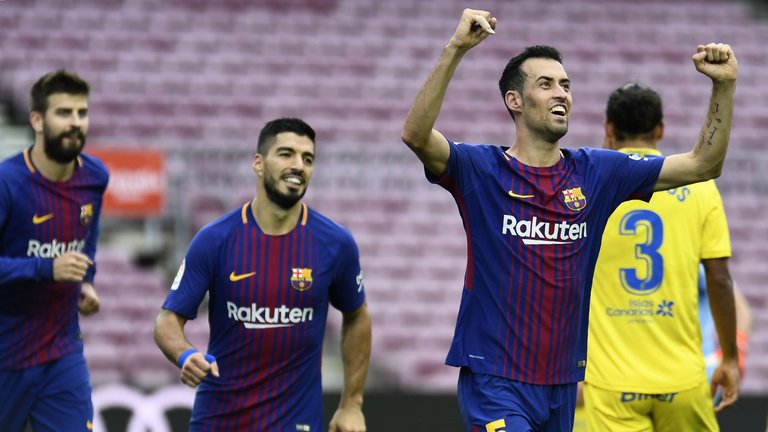 Barcelona continued their unbeaten run in league play, defeating Las Palmas 3-0 in a behind closed doors match at the Camp Nou. Despite a scoreless first-half, Barcelona used a second-half brace from Leo Messi and a goal from Sergio Busquets to down the visitors. Busquets headed home Messi’s cross to the center of the goal in the 47th-minute for a 1-0 lead. Messi doubled the lead from a close-range finish, before finishing off Luis Suarez’s assist in the 77th-minute. Palmas was held to one shot on goal, while Barcelona had 10 on goal in total. The victory sees the Catalan side six points clear at the top of the table, while Palmas sit in 17th on goal difference.

Elsewhere in Europe, Bayern Munich was held by Hertha Berlin in Germany, while Hoffenheim fell on the road. Valencia squeaked past Athletic Bilbao in La Liga play, while Liverpool were held in Newcastle. Roma defeated AC Milan on the road in Italy, while Juventus faced Atalanta. The must-watch match in Ligue 1 came from Nice as the hosts welcomed Marseille to town.

Here’s a complete rundown of all the day’s action across Europe:

Burnley continued their strong run on the road this season, defeating Everton 1-0 at Goodison Park. A first-half goal from Jeff Hendrick was all Sean Dyche’s side needed to claim three points on Merseyside. The midfielder slid home Stephen Ward’s assist to the center of the goal for a 1-0 lead. Everton lacked the final product, forcing Nick Pope into only four saves on the day. Burnley has already claimed more points on the road this season than all of last season.

The points were shared at St. James Park as Newcastle drew Liverpool 1-1. Philippe Coutinho’s wonderful free kick gave the visitors a 1-0 lead in the 29th-minute. Joselu equalized for Newcastle in the 36th-minute, bundling home from inside of the box. The Reds were held to two shots on goal, and now sit in seventh in the league table. Newcastle moves up to ninth.

Los Blancos earned their first home league win of the season, defeating Espanyol 2-0. A brace from Spanish international Isco was all Zinedine Zidane’s side needed to claim the victory. Isco slotted home the opener in the 30th-minute as he finished off Cristiano Ronaldo’s through-ball assist. The 25-year-old doubled the lead in the 71st-minute as he finished nicely on a Real Madrid fast break. Espanyol suffered their third league defeat of the year, while Madrid sits in fifth.

Valencia held off Athletic Bilbao 3-2 at Mestalla on Sunday, remaining unbeaten in league action. Simone Zaza opened the scoring in the 27th-minute for his sixth league goal of the season. Daniel Parejo added to the lead from the penalty spot in the 34th-minute. Aritz Adruiz pulled Bilbao to within one in the 59th-minute, scoring his fourth goal of the season. Rodrigo Moreno headed home Valencia’s third in the 66th-minute making it 3-1. Raul Garcia’s close-range header made things interesting late, but that was the closest the visitors came to coming back. Valencia sit in third while Bilbao are in 13th.

In their first game without Carlo Ancelotti on the sidelines, Bayern Munich were held to a 2-2 draw at Hertha Berlin. Mats Hummels headed home Bayern’s opener in the 10th-minute from a set piece. Robert Lewandowski added to the lead in the 49th-minute slotting home Corentin Tolisso’s assist. Ondrej Duda pulled one back two minutes later from close range for Hertha. Salomon Kalou netted the equalizer for Hertha in the 56th-minute, scoring his second goal of the season. Bayern are winless in three across all competitions, while Hertha snap a two-match winning run.

Freiburg earned the result of the weekend, defeating Hoffenheim 3-2 at home. The visitors held a 1-0 lead in the 14th-minute as Robin Hack’s long-range effort found the bottom left corner. Florian Niederlechner equalized for Freiburg a minute later from a left-footed finish. Caglar Soyuncu made it 2-1 to Freiburg in the 18th-minute from a close range header. Pascal Stenzel capped the win with his first goal of the season, coming in the 87th-minute. A late own goal by Julian Schuster made it 3-2, but that would be the final from the MAGE SOLAR Stadion. Freiburg sit in 15th, while Hoffenheim are in third.

Atalanta fought back from a two-goal deficit to draw Juventus 2-2 at home. Federico Bernardeschi opened the scoring for Juve in the 21st-minute from a close-range finish. Gonzalo Higuain doubled the lead three minutes later, finishing off the Italian’s assist to the top left corner. Mattia Caldara pulled one back for Atalanta in the 31st-minute, scoring on a rebound following a set piece. Bryan Chrisante netted the equalizer in the 67th-minute, heading Alejandro Gomez’s assist into the top left corner. Paulo Dybala missed a golden chance to play the hero once again, seeing his late penalty kick saved. Juve suffered their first draw of the season, while Atalanta sits in 11th.

AS Roma extended their unbeaten run to six matches across all competitions, defeating AC Milan 2-0 on Sunday. Edin Dzeko scored the winning goal in the 72nd-minute, rifling home from outside of the box. It was the Bosnian’s eighth goal in all comps. Alessandro Florenzi doubled the lead, finishing from a rebound in the box. Hakan Calhanoglu was later sent off for Milan in the 80th-minute after earning a second yellow card. Milan suffered their third league loss of the season, while Roma sits in fifth place.

In the top match of the round in Ligue 1, Marseille fought back from an early deficit to top Nice 4-2 away from home. Goals from Mario Balotelli and Jean Michael Seri gave Nice a 2-0 lead after 16 minutes at the Allianz Riviera. Lucas Ocampos started the comeback in the 26th-minute from a close range finish. A Pierre Lees-Melou own goal drew the visitors level, before Ocampos doubled his tally before halftime. Luiz Gustavo’s left-footed blast in the 47th-minute made it 4-2 for Marseille who would not let the lead slip. Despite being reduced to 10-men, Marseille held on for a huge three points on the road. Nice drops to 10th, while Marseille jump to third.