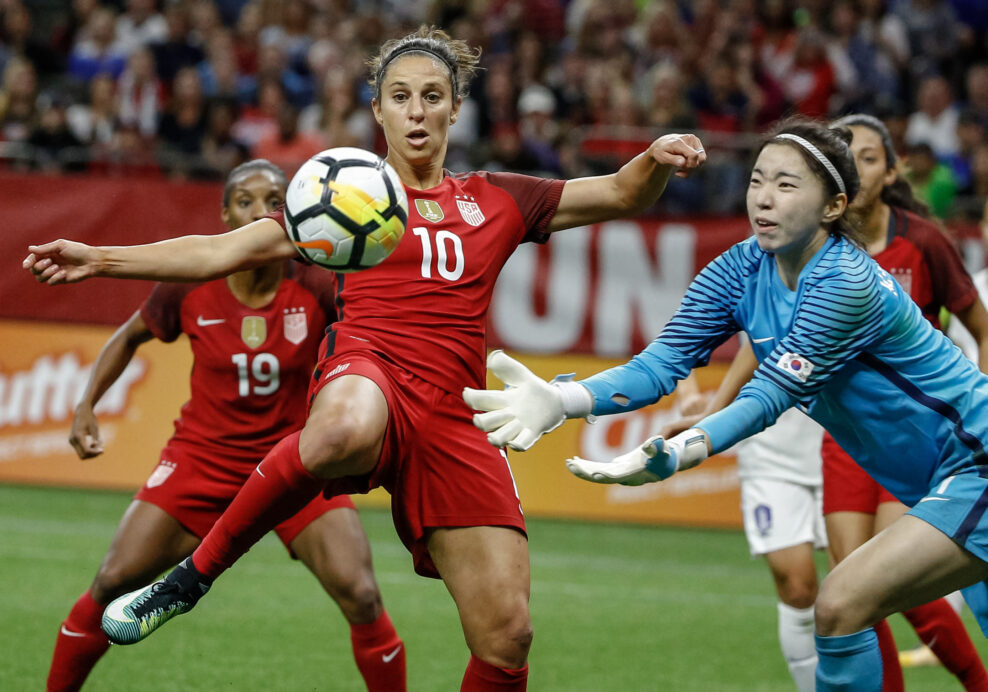 As is frequently the case with the U.S. Women’s National Team, a friendly ended in victory, this time in a 3-1 result over South Korea. The win is the fifth in a row for the reigning world champions, who have been on a roll since a turbulent beginning to the year.

The team’s attacking players did their usual damage, particularly in the first half, when the action was at its highest. Certain individuals stepped up, with the likes of Alex Morgan and Julie Ertz collecting goals and general plaudits.

The second half, though, provided to be much slower than the first, though the damage was already done, with the last goal coming in the 52nd minute.

Here’s a closer look at some of the bigger talking points from Thursday:

The USWNT is known for their attacking prowess, and it was fully on display in their victory over South Korea. Collectively, the attacking unit was active in the first half, and in total registered 21 shots, 11 on goal.

Individually, Alex Morgan stood out. After going on a goal scoring drought for the national team from November to August, she has been unstoppable, scoring her 12th goal in 13 matches for club and country. Her goal, the team’s second, showed her individual quality, as she masterfully turned and got around a Korean defender before forcefully striking the ball into the back of the net. She posed a threat to the opposing defense for the entirety of her 63 minute stint.

Andi Sullivan also delivered a strong performance, her first for the national team since November, after which she tore her ACL. She played at the front of a midfield three, and in her 45 minute shift, she provided opportunities for the players ahead of her and took some of her own, including one in the third minute. It seems as if she is picking up from where she left off after an impressive first four matches for the team, though her camp will end here as she is set to return to Stanford.

Though the U.S. team is not a particularly messy team defensively in the grand scheme of things, the defensive performance on the night was not flawless. The defensive four that started the match — Kelley O’Hara, NWSL defender of the year Abby Dahlkemper, Becky Sauerbrunn, and Casey Short — were not as tight as they could have been for stretches of the match, though South Korea posed less of a threat as the match went on.

The biggest defensive mistake came when South Korea scored their lone goal in first half stoppage time. Though Han Chaerin’s strike from distance was impressive, Dahlkemper was turned twice in the process.

While it was not a perfect night for the defense, with World Cup qualifying a year away, mistakes are affordable. Dahlkemper is only ten games into her national team career and still has things to learn. Ellis, though, is seemingly letting her learn from her mistakes, which can only benefit the player and the team.

Julie Ertz may have made her way into the U.S. Women’s National Team as a center back and won a World Cup in the process, but she is just as good as a defensive midfield role.

The versatile player had experience playing in the midfield for the Chicago Red Stars, but Ellis finally embraced it this year, where Ertz has been hard to drop. Against South Korea, she demonstrated why that is the case, stopping the opposition offense as frequently as possible, making important challenges throughout the 90 minutes.

She also showed off her attacking skills, as she was part of the of the second goal by keeping the ball alive, and scored one of her own from a header earlier in the night. Not bad for a defensive player.

The USWNT has a long history of opposing turf, so much so that they attempted to limit the amount of times they play on the surface in their new CBA. Yet, they played on a turf surface again on Thursday, and many were not pleased.

It has been reported that the players rejected the Mercedes-Benz Superdome as a venue because of the quality of the turf, though they had to play there anyway. During the broadcast, head coach Jill Ellis described the turf as “sticky,” and added that players were getting stuck in it.

While the team performed well, dominating the opposition and recording a solid performance, the game clearly lagged on a field that world champions should not be playing on.

THE GROUP GETS SMALLER

Mallory Pugh picked up an injury at the end of the first half, which is suspected to be a right hamstring strain that will rule her out for Sunday’s match, also against South Korea. Additionally, the team lost Andi Sullivan in an agreement with Stanford University that she would return after the first match.

The selection of players is now down to 18 for Jill Ellis, after two withdrew from the squad before camp began. Tobin Heath and Taylor Smith cited their own injuries picked up over the course of their NWSL seasons as reasons to miss camp, the first to make the group smaller.

It is unknown whether or not Ellis will call someone else for the second match. As she dresses only 18 for each match anyway, it is entirely possible that she finds her current group enough for the match.