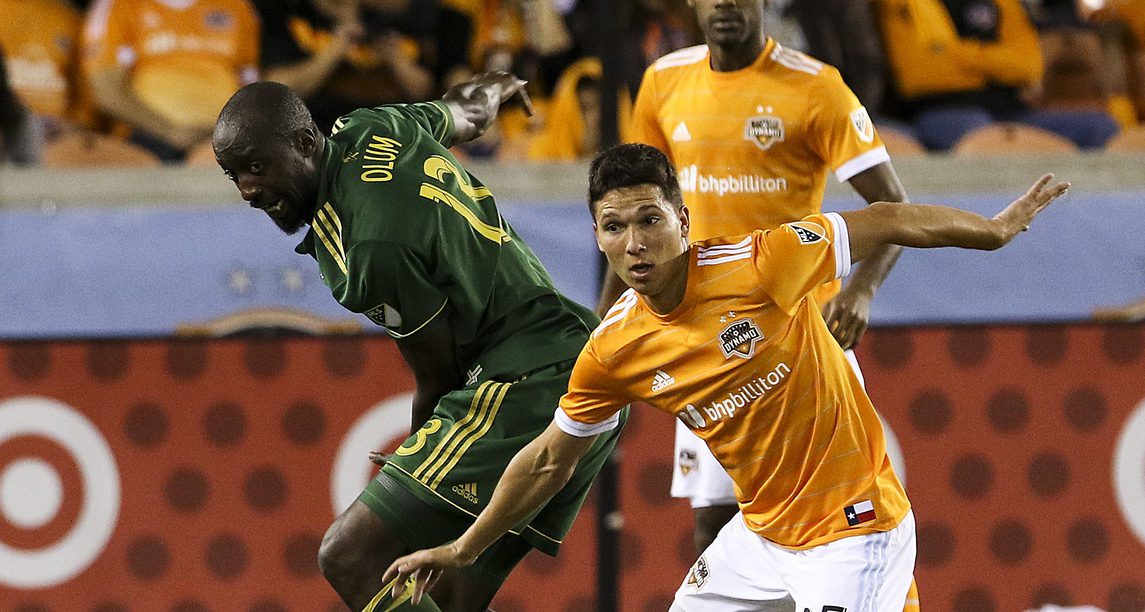 To say the first leg between the Portland Timbers and Houston Dynamo lacked inspiration is being nice.

The scoreless draw on the rough field at BBVA Compass Stadium did little to separate the two sides and create excitement for Sunday’s second leg at Providence Park.

With more on the line on Sunday, hopefully we’ll see more than four shots on target as two teams with very good attacks collide with a spot in the Western Conference final on the line.

Here’s a look at Sunday’s match:

Ninety minutes of soccer certainly happened in Houston on Monday night, but that’s about all the positives you can throw out in the open.

Mixed in with a few controversial calls in the first half were injuries to Timbers players. Diego Chara and Larrys Mabiala left before the second half started and Darlington Nagbe’s night was cut short in the 59th minute.

With everyone else spending significant time in the training room, Diego Valeri enters Sunday as one of the few healthy Timbers players.

He may not have his normal arsenal of teammates alongside him, but the Argentinian is still going to create chances, just maybe not in the volume he’s used to. Expect Valeri to be in the spotlight for the majority of the 90 minutes. His biggest concern is having a teammate capable of connecting with his service.

Joe Willis will be unexpectedly thrust into the starting lineup on Sunday after Tyler Deric was suspended by MLS pending the result of an investigation into a domestic incident.

Willis, a seven-year MLS veteran who has spent time with D.C. United and the Dynamo, made eight appearances in the regular season and has one career postseason start.

Sunday’s match will be one of the biggest of Willis’ career. The goalkeeper ,who hasn’t started since July 1, will be a bit rusty, but he’s got a job to do against the depleted Timbers attack.

Alvas Powell came out on top in the first 90 minutes of this intriguing battle on the right wing. The Jamaican right back silenced Quioto, who has been one of the Dynamo’s top threats all season.

If Powell is able to quell the threat of the Honduran once again, it will diminish the Dynamo’s chances of pouncing on the counter. The visitors will still be dangerous, but the Timbers back line will only have to focus in on Alberth Elis and Erick “Cubo” Torres.

For Quioto to succeed, he must look to strike down the wing when Powell attempts to surge forward and provide a boost to the Timbers attack.

The real X-Factor for the Timbers should be their athletic trainer if a few players are ready and able to perform on Sunday.

One of the guaranteed replacements for Caleb Porter’s men will be Lawrence Olum, who will replace Diego Chara in defensive midfield. Olum could be partnered with Amobi Okugo in a patchwork pairing with David Guzman also in question for Sunday.

In order to prevent a wide-open game dictated by the skilled Dynamo attackers, Olum must make the key tackles Chara has made throughout the season. Olum won’t be as precise as Chara, but he does have to be positionally sound.

Philippe Senderos has been seemingly around forever, and the Swiss international played one of his best games of the season in the first leg.

Sure, Senderos gets a bit lucky on Sunday facing some second-string attackers, but he still has to do his job in the middle of the back four in order to give the Dynamo a chance of stealing an away goal.

Sunday’s second leg will be far from a star-studded affair with backups and MLS journeymen strewn across the field on both sides.

But the stars that will be out there like Valeri, Torres and Elis will have to hunt for scoring opportunities that weren’t there in the first leg.

With the Timbers’ spine vulnerable and their fullbacks being one of the strengths of the team, expect the Dynamo to attack through the middle by way of Alex, Elis and Torres. If that fails, it could be a long day for the Dynamo.

The Timbers will run through Valeri, but they’ll need one of Darren Mattocks, Jeremy Ebobisse and Dairon Asprilla to provide support in a scoring role with the Dynamo locking in on Valeri.

Portland’s defense has been suspect for parts of the season so it would benefit the home side if it scores as early as possible to put pressure on the young Dynamo attack, which may lead to more mistakes.