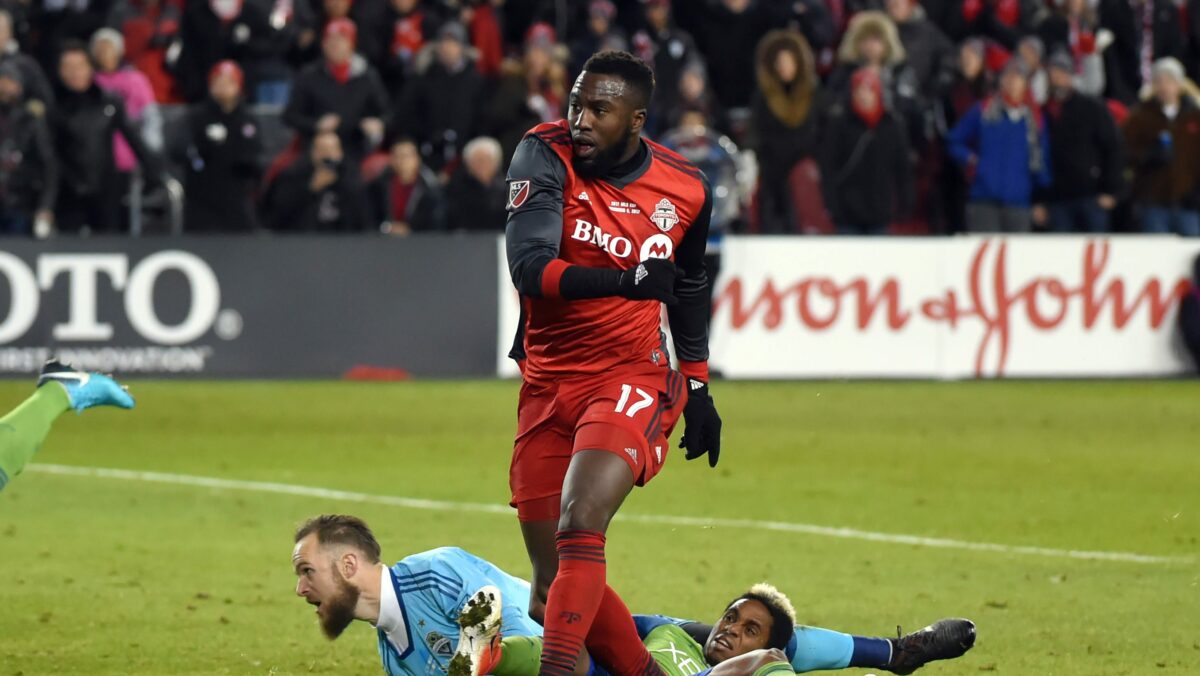 TORONTO – Throughout his decade in the spotlight, Jozy Altidore has been an American soccer star, a pariah and everything in between. He’s been a punching bag for criticism and a beacon of hope, sometimes all at the same time. The forward has experienced great highs and great lows throughout his career, and there’s little doubt that the past 365 days have likely been the lowest of those lows.

But as he barreled his way into the Toronto FC press conference room with his MLS Cup shirt on and alcohol-soaked goggles strewn all over his neck, there was no missing Jozy Altidore. As he kissed the MLS Cup trophy in front of Toronto FC’s fans, there was no doubt what Jozy Altidore was feeling. He was a champion. Finally.

It was fitting that Altidore scored what turned out to be the game-winning goal in a 2-0 win over the Seattle Sounders to capture an ever-elusive MLS Cup. After helping lead TFC to the best regular season in MLS history, Altidore combined with fellow DP Sebastian Giovinco for the game’s biggest moment. The goal immediately felt like justification for years and years of hard work for a club and group of players that had been on the wrong side of history several times.

It was also a moment that, for Altidore, felt surreal even before the champagne kicked in.

“It’s just the fact that it’s real,” Altidore told SBI. “We won the treble and we’re the first team ever. We all wanted greatness, but to have it finally play out, it’s terrific.”

It played out on a night that looked like it would be just another botched chance. TFC created opportunity after opportunity, and squandered them all. Just a week after suffering an ankle injury, Altidore was somewhat quiet for the first half and into the second. That was until he broke through the Sounders’ offside trap, rushed onto a Giovinco ball and fired home a finish that will live on in TFC lore forever.

It’s a process that started nearly three years ago for the 28-year-old forward, and he remembers it vividly. Altidore says he remembers the initial joking with Michael Bradley. He remembers the discussion in June 2014 before the USMNT took on Nigeria. He remembers Bradley inviting him to Toronto, a team that had gone from laughing stock to “Bloody Big Deal” and right on back.

With his Sunderland career all but over, the joke rapidly turned into a reality. What came after was the same type of peaks and valleys that had defined his career. There were goals, 44 of them to be exact, and there were big moments and a genuine connection with what Altidore called “the best city in the world” just moments after being named MVP on Saturday night.

It’s not the first trophy of Altidore’s career. He’d won a Dutch Cup during his time at AZ Alkmaar. He won a Gold Cup this summer with the U.S. Men’s National Team. He’s experienced big wins and big goals, but Saturday’s was as personally satisfying as any of the 164 he scored before it, and it was easy to see.

“I came here and I didn’t know what to expect,” Altidore said. “I was, in a lot of ways, not on the best route personally. I was going through a lot of stuff away from the field. They all know about my life, and to come to a place where everyone was so helping, it was incredible. They helped me through so much, more than they know or understand, so when I say this is a special place, I mean it. If you could go beyond family, I would.

It hasn’t all been greatness. There were also injuries, plenty of them. There were setbacks and heartbreaking moments for a Toronto FC team that dominated an 2016 MLS Cup final defeat in a way previously unseen. And, to top it all off, there was the missed World Cup that will almost certainly continue to loom large even after Saturday’s performance.

But, for those that have played with him, there’s much more to Altidore than all of that.

“Jozy’s been awesome all season,” added Drew Moor. “He’s such a good player. He’s such a big member of this squad. So happy for him, so proud of him.”

You could sense that level of pride from the moment Altidore’s goal popped past Stefan Frei and into the back of the net. It was felt as BMO Field shook, and it was felt as the fans chanted “Jozy, Jozy” at a player that had been experiencing vastly different chants stateside throughout TFC’s recent run.

“I don’t know where I’m going to wake up tomorrow,” Altidore said with a laugh. “We’ll see what happens. I’m just enjoying it as much as I can. These are rare moments. They don’t come around often.

“To be able to come here and do this? This will live on long after we’re gone. That’s what makes it so special.”