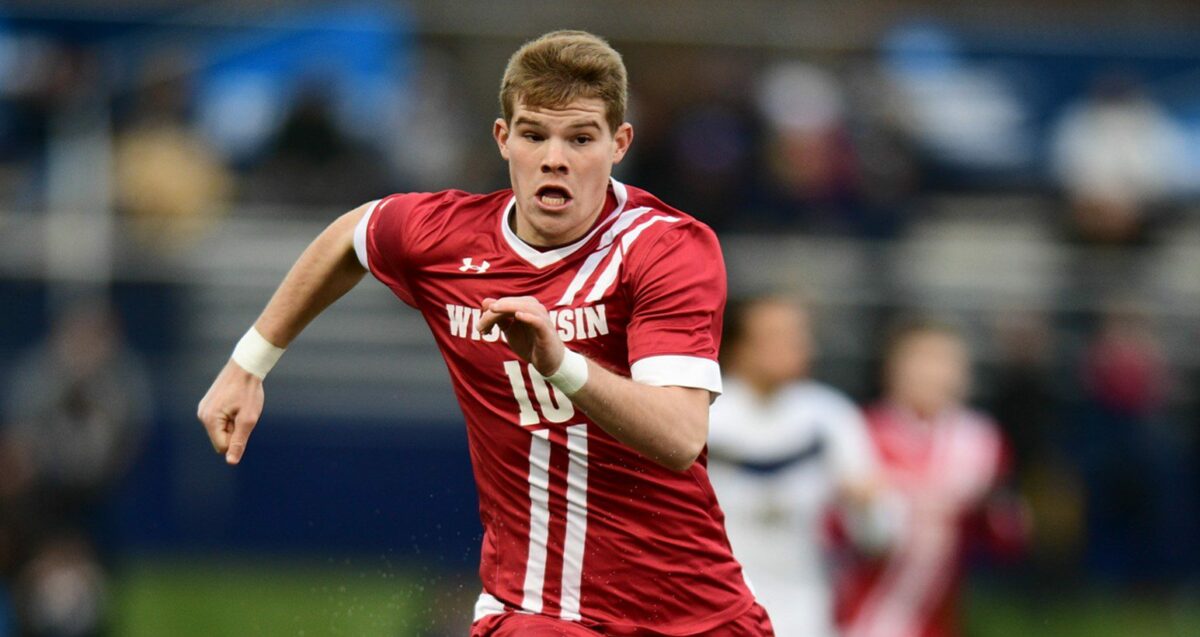 When you put up numbers like Chris Mueller did in 2017, you rarely get overlooked simply because players that lead the country in assists are rarely looked past. Throughout his senior season, Mueller proved to be one of the country’s elite playmakers while guiding Wisconsin to a strong run through the Big 10 and a Sweet 16 appearance.

Yet, as the season wore on, Mueller was, in some ways, neglected. But make no mistake, with the MLS Draft looming, Mueller isn’t being overlooked anymore.

After leading the nation with a whopping 20 assists throughout the 2017 season, Mueller has jumped up draft boards ahead of the upcoming MLS Combine. Widely seen as one of the more dynamic and pro-ready forward options in the draft, Mueller is expected to be a top selection when names begin being called on Jan. 19.

With his pro career looming, Mueller is looking to show that he belongs among the best after a standout senior season.

“I know I was overlooked when the MAC Hermann list came out,” Mueller told SBI. “To not make the final 15 was shocking to me. I thought I had done enough to be there. I use that all as motivation. It’s something I’ve been through my whole life: being overlooked. It’s fine. I like that and I like to play with numbers against me. It continues to fuel me and give me drive throughout this process.”

“No question. It was frustrating, I’m sure, for him. It was frustrating for us,” Trask added. “It was basically criminal… His numbers could have been even higher. You’re talking about a guy, Lee Nguyen, Ned Grabavoy, some unbelievable passers have played in the Big 10 throughout the years, and Chris set the new record by three assists. That’s remarkable.”

Mueller’s road towards the professional game started just outside of Chicago in nearby Schaumburg, Illinois. Mueller attended a dual-language school where he played predominantly with Latinos. Because of that, Mueller was raised to value the technical side of the game. He didn’t focus on speed or athleticism. Rather, he focused on playing with feet because that’s how he learned to play.

Eventually, he began playing with Sockers FC starting at age nine, and he remained there throughout his youth career. There were times where the nearby Chicago Fire were an option but, unsure about the Homegrown aspect and loyal to the Sockers, Mueller kept pushing with his childhood club.

Upon his arrival at Wisconsin, Mueller began his first season at 17 years old. He wasn’t fully ready for the college game. It took him time to learn the mental side of the game and focus on boosting his confidence. For Trask, the key was getting Mueller to look past “the game within the game” and look towards providing in quantifiable ways.

That lesson took hold in Mueller’s junior year as he led the team with eight goals and 11 assists after firing five goals and providing three assists the year before. In his senior season, Mueller’s numbers exploded to nine goals and 20 assists. When all was said and done, Mueller finished as a a two-time All-Big Ten First Team member and a Big Ten Offensive Player of the Year award winner.

“You see a lot of guys, and either he’s an assist guy or he’s a goalscorer. Chris can do both,” Trask said. “That’s what’s exciting about him. He’s not just going to stand there and wait to get a shot for himself. He’s not going to just wheel and deal and look to put balls in the box or slip guys in behind. He can do both…I’ve said it to people, imagine a younger Mike Grella. A guy that can skin people, create for himself or create for other players.”

Looking ahead, Mueller expects to play out wide in a 4-3-3, or perhaps as a false nine in a 4-4-2 after thriving in that role in college. Trask expects Mueller to largely be a wide option that could eventually develop into a consistent central player.

It’s that type of versatility and value that has Mueller soaring up draft boards. He’s widely seen as one of the more MLS-ready prospects, a player that can step in and provide minutes to a number of teams off the bat. He’s also only 21 years old, even if he is coming off of his senior season.

Throughout that senior season, Mueller proved he can play with and against some of the nation’s best. Now, he’s excited for the opportunity to take that step to the next level and prove himself once again.

“It’s been a dream since I was a kid,” Mueller said. “You look at every youth soccer player and they say, ‘Wow, that guy’s a pro and I’d like to be just like him’. I feel like now, as I pick up that role, if I can do that, that would be a dream come true.

“I want to push hard, but the draft is just a milestone. It’s a dream come true, but I hope I can get drafted, get into a team, and make a name for myself. It’s that next step, getting into that professional level, it’s going to be awesome.”