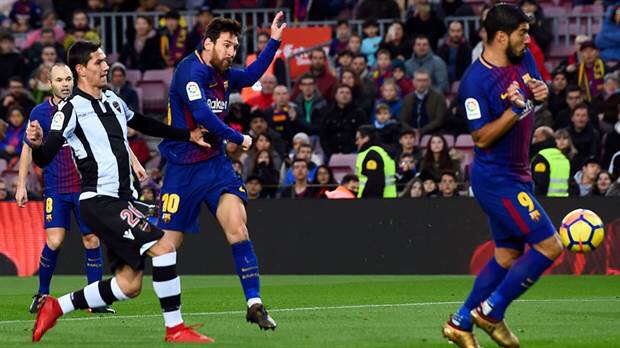 Barcelona continued their dominance in La Liga, as they rolled past Levante 3-0 at the Camp Nou. A day after signing Philippe Coutinho from Liverpool, Ernesto Valderde’s side earned their 15th league win of the season. Lionel Messi opened the scoring after 12 minutes, scoring his 16th league goal of the season. Messi finished off Jordi Alba’s headed pass with his signature left foot. Luis Suarez’s right-footed finish after 38 minutes doubled Barcelona’s first-half lead. Paulinho capped off the win, scoring his seventh goal of the season in stoppage time. Levante was held to two shots on goal, losing their second match out of their last five. 21-year-old American Shaq Moore played the entire 90 minutes for the visitors in his sixth league appearance of the season.

Defending F.A. Cup holders Arsenal suffered a shocking defeat at the City Ground on Sunday, losing 4-2 to Nottingham Forest. U.S. international Eric Lichaj sparked the first-half with a brace for Forest, who completed the upset. Lichaj’s first goal came 20 minutes in from a close-range header. Per Mertesacker leveled the score three minutes later for Arsenal, before Lichaj’s looping volley regained the lead for the hosts before halftime. Ben Brereton’s penalty kick extended the lead to 3-1 for Forest in the 64th-minute. Danny Welbeck’s fifth goal of the season made it 3-2 before Kieran Dowell slammed the door shut with a penalty kick goal of his own. Sunday’s loss was Arsenal’s first third round defeat since 1996, as Forest advances to the fourth round.

Tottenham Hotspur advanced to the fourth round after a 3-0 triumph at Wembley over AFC Wimbledon. Following a scoreless first-half, Harry Kane netted a pair of goals in a two-minute span in the second-half. Kane’s first came from a right-footed tap in before the English striker netted again two minutes later. Jan Vertonghen’s first goal since October 2013 capped off the strong performance by Mauricio Pochettino’s side.

Real Madrid was only able to claim one point in a 2-2 road draw at Celta Vigo on Sunday. Los Blancos held a 2-1 lead at halftime thanks to a pair of left-footed finishes by Gareth Bale. Daniel Wass’ long-range effort gave Celta an early lead ahead of the Welsh international’s goals. Keylor Navas stoned Iago Aspas from the penalty spot in the 72nd-minute to keep the visitors ahead. However, Maxi Gomez’s seventh goal of the season claimed a huge home point for Celta. The Uruguayan headed home Wass’ assist to seal the deal. Zinedine Zidane’s side suffered their fifth league draw of the season, while Celta are in 14th after the result.

Espanyol faces Malaga on Monday in the final match of Round 18.