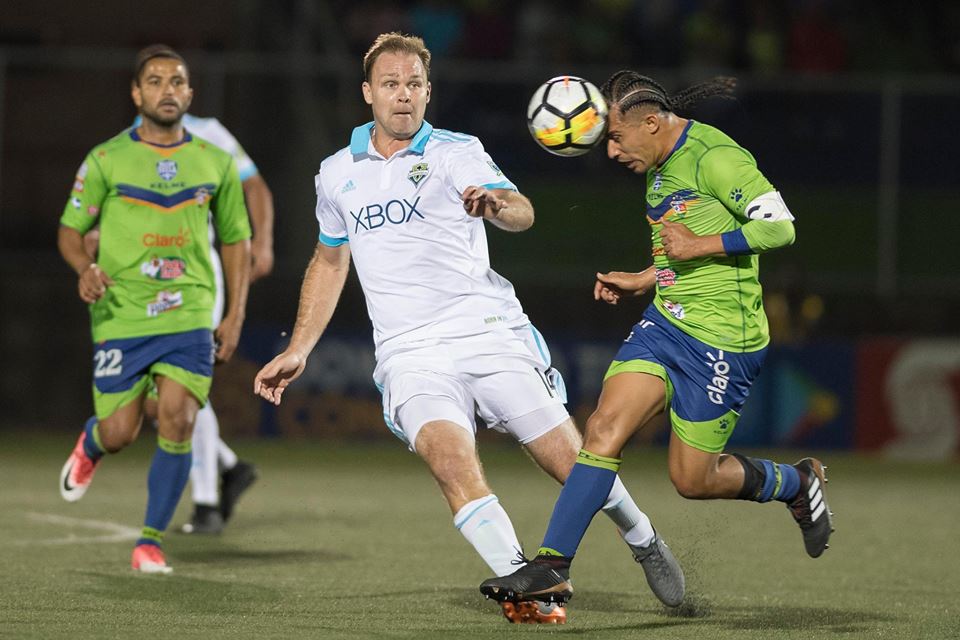 The Seattle Sounders were sitting pretty through more than 60 minutes. Then, disaster struck.

First in the shape of Gerson Mayen, then via a worrisome injury.

The Sounders wasted a lead and suffered a 2-1 road defeat to Santa Tecla on Thursday in the opening leg of their CONCACAF Champions League Round of 16 series. Seattle was on its way to victory at Estadio Las Delicias in Santa Tecla, El Salvador, through an early and sublime long-distance goal from Nicolas Lodeiro, but the host team responded through a Mayen brace to deny the MLS outfit of a win in its first competitive game of the year.

The American-born El Salvador international began the comeback for Santa Tecla in the 67th minute, finishing from close range after the Sounders failed to properly deal with a cross. He struck again for the go-ahead goal nine minutes later by firing a penalty kick into the back of the net.

If that was not bad enough, the Sounders had to finish the match with 10 men after Jordan Morris exited with an injury in the 84th minute. Seattle had used all of its substitutions when he picked up the knock and could not replace him.

Whether he is available for the return leg is currently unknown. Nonetheless, the Sounders will be looking to overturn this series when they host the decisive fixture on March 1 at CenturyLink Field.

Gerson Mayen will not soon forget this performance. The former Chivas USA player — yes, you read that correctly — sparked Santa Tecla’s second-half rally to victory with a clutch brace, first by tucking a shot away from in close and then by converting on a penalty kick. Things were not looking good for Santa Tecla midway through the closing stanza on Thursday, but Mayen’s heroic performance gave the club the advantage heading into next week’s second leg in Seattle.

Referee Melvin Matomoros’ decision to award the game-winning penalty kick will surely be a topic of debate, but it was the correct call because Jordan McCrary made contact with Wilma Torres in the the penalty area. The foul gave Santa Tecla a grand opportunity to complete its comeback at home, and Mayen made no mistake on his well-taken attempt from 12 yards out.

Chad Marshall was not poor throughout the entire 90 minutes, but he was involved in both of Santa Tecla’s goals. The veteran centerback was one of two Sounders players that did not properly deal with the cross that led to Mayen’s equalizer — Marshall failed to stand his ground and was taken out of the play with some contact — and it was Marshall who chose to try and win a 50-50 aerial ball in the 18-yard box with a weak header. Marshall could have jumped to try and get more power on the attempted clearance, but all he did was nod it a few feet and that allowed Torres to try and chase it down before getting clipped by McCrary.