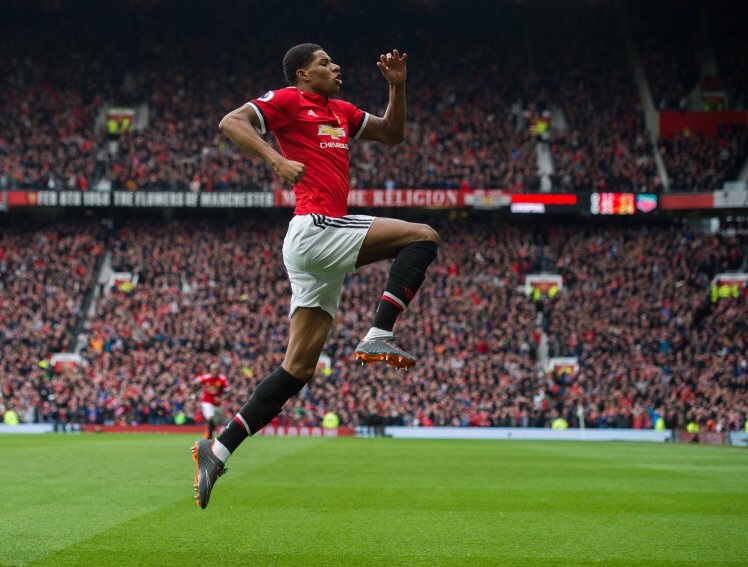 Knowing the Premier League title looks to be going to the blue side of Manchester, Manchester United’s next best goal is to finish as league runners up behind city rivals Manchester City. The Red Devils boosted their chances of that, downing visiting Liverpool 2-1 at Old Trafford. Marcus Rashford led the way with a brace for Jose Mourinho’s side, scoring both in the first half. Rashford opened the scoring after 14 minutes finishing from a left-footed effort. The England international doubled his tally in the 24th-minute scoring his 12th goal in all competitions this season. Eric Bailly turned into his own net in the 66th-minute to give Liverpool a goal but it proved to be the closest the visitors would get to a comeback. David de Gea’s only two saves came on Roberto Firmino in the first-half, while Mohamed Salah was silenced by Ashley Young. United are 13 points back of City who play Monday, while Liverpool are in third.

Elsewhere, Cristiano Ronaldo put Real Madrid on his back in a 2-1 road win at Eibar. Barcelona faced a road trip to Malaga, while Sevilla faced Valencia. Hoffenheim rolled to a home win against struggling Wolfsburg. Roma downed Torino in a comfortable showing at the Olimpico. PSG faced Metz at the Parc Des Princes following their Champions League elimination.

Burnley continued their strong campaign with a 3-0 road triumph at West Ham United. Chris Wood netted two goals and added an assist in the Clarets win while Ashley Barnes scored the winning goal after 66 minutes. Barnes’s right-footed missile gave Burnley a 1-0 lead after the hour mark. Wood’s first goal came four minutes later from a close range finish as Aaron Lennon set up the New Zealand international. Wood’s seventh league goal from a tap in capped off the scoring at London Stadium. Ugly scenes occurred from the West Ham fans as several pitch invasions summed up the poor result for the Hammers. David Moyes’ men are in 16th place while Burnley are in seventh.

Real Madrid made it three straight wins after a 2-1 road success at Eibar on Saturday. Cristiano Ronaldo headed home Dani Carvajal’s cross in after 84 minutes which proved to be the winner at the Estadio Municipal de Ipurua. Ivan Ramis’ header in the 50th-minute pulled Eibar level after Ronaldo opened scoring in the first-half. CR7 now has 30 goals in all competitions this season, and eight in his last five appearances. Eibar remains in eighth place after the loss while Madrid sit four points back of second place.

Barcelona continued their quest for the league crown with a 2-0 road win at Malaga. Luis Suarez and Philippe Coutinho each got on the scoresheet in the dominant first half for the league leaders. Suarez headed in Barca’s opener after 15 minutes for his 21st league goal of the season. Coutinho doubled the lead with a fantastic backheel in the 28th-minute. Malaga was reduced to 10 men after 30 minutes with Samu Garcia saw a straight red for a foul on Jordi Alba. The defeat was Malaga’s seventh in a row, who now sit 11 points from safety. Barcelona are 11 points ahead ahead of second place Atletico Madrid, who play tomorrow.

Schalke extended their winning run to four matches after a 1-0 victory at Mainz on Friday. Following a scoreless first half, Daniel Caligiuri’s long-range strike in the 55th-minute found the bottom right corner for the lone goal in the match. It was the German’s fourth goal of the season. Ralf Fahrmann was the busier of the two keepers, making four saves in the clean sheet. Weston McKennie played the full 90 minutes for Schalke, in his first start since Dec. 13th. Mainz remains in 16th and in the relegation playoff place while Schalke are in second.

Hoffenheim made it back-to-back league wins with a 3-0 beatdown of Wolfsburg at home. Nico Schulz’s left-footed strike in the 18th-minute has Hoffenheim ahead early at home which they would take into halftime. Serge Gnabry’s long-range effort extended the hosts lead after 77 minutes before an own goal by Wolfsburg’s Josua Guilavogui capped off the strong day for Hoffenheim. Hoffenheim are in seventh place while Wolfsburg sit just outside of the bottom three on goal difference.

Roma used a trio of second-half goals to down visiting Torino 3-0 at the Olimpico. Kostas Manolas’ header after 56 minutes gave Roma a 1-0 lead following a corner kick. Daniele De Rossi slotted home Roma’s second in the 73rd-minute to extend the Romans lead before Lorenzo Pellegrini capped the scoring in stoppage time. Radja Nainggolan had two assists in the home win for Roma. The hosts remain in third place while Torino are in ninth.

AS Monaco extended their domestic unbeaten run to 14 matches after a 3-1 road win at Strasbourg on Friday. Stevan Jovetic’s seventh goal of the season opened scoring for Monaco in the fifth minute. Stephane Bahoken’s right-footed equalizer in the 19th-minute leveled the score for Strasbourg before Rony Lopes regained the lead for Monaco two minutes later. Brazilian International Fabinho extended the visitors lead to 3-1 on the verge of halftime, giving him six goals this season. Strasbourg are in 15th while Monaco are in second.

PSG made it seven consecutive league wins with a 5-0 beating of Metz at home. The hosts bagged four goals in the first-half looking comfortable. Thomas Meunier opened the scoring after five minutes before Christopher Nkunku bagged a brace extending the lead to 3-0. Kylian Mbappe’s 15th goal in all competitions capped the dominant first half for the hosts. Thiago Silva headed in PSG’s fifth to cap the perfect day for Unai Emery’s side. American forward Tim Weah received 19 minutes of playing time as a second-half substitute. PSG are 14 points clear at the top of the table while Metz are nine points from safety.