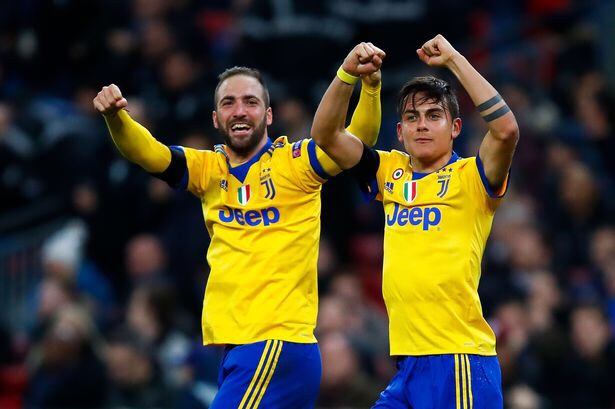 After allowing a two goal lead to slip away in their first leg matchup against Tottenham, Juventus knew a stronger performance would be needed in London for a chance to advance into the UEFA Champions League quarterfinals.

Maximilliano Allegri’s side used a quick pair of goals from Gonzalo Higuain and Paulo Dybala to defeat Spurs 2-1 in Wednesday’s match at Wembley, and 4-3 on aggregate to advance.

It wasn’t the best first half for the defending Serie A champs, who were dominated for the opening 45 minutes. After being kept out on a trio of occasions earlier in the half, Son Heung-Min opened the scoring after 39 minutes. The South Korean bundled home after mishitting Kieran Trippier’s cross originally.

Higuain’s 20th goal in all competitions gave Juventus life in the 64th minute, scoring from close range. The Argentine set up Dybala three minutes later for the go-ahead goal, as the forward slotted past Hugo Lloris.

Harry Kane’s last-ditch header was cleared off the line by Andrea Barzagli, which added to the drama. Gianluigi Buffon made five saves in the win, while Lloris made one.

Manchester City returned to the Etihad Stadium knowing it could sit back in the second leg after a 4-0 first leg win in Switzerland. Pep Guardiola’s men advanced to the quarterfinals, despite a 2-1 second leg defeat to FC Basel.

Gabriel Jesus returned to the City squad, and did so in good fashion, netting the opening goal after eight minutes.

Mohammed Elyounoussi drew the Swiss side level in the 17th minute, scoring his sixth goal in all competitions.

Michael Lang put Basel in front after 71 minutes as he finished off the Norweigan’s assist into the top-right corner. City, which had several backups in the starting lineup, could only record three shots on goal.

Manchester City and Juventus join Real Madrid and Liverpool into the quarterfinal round.