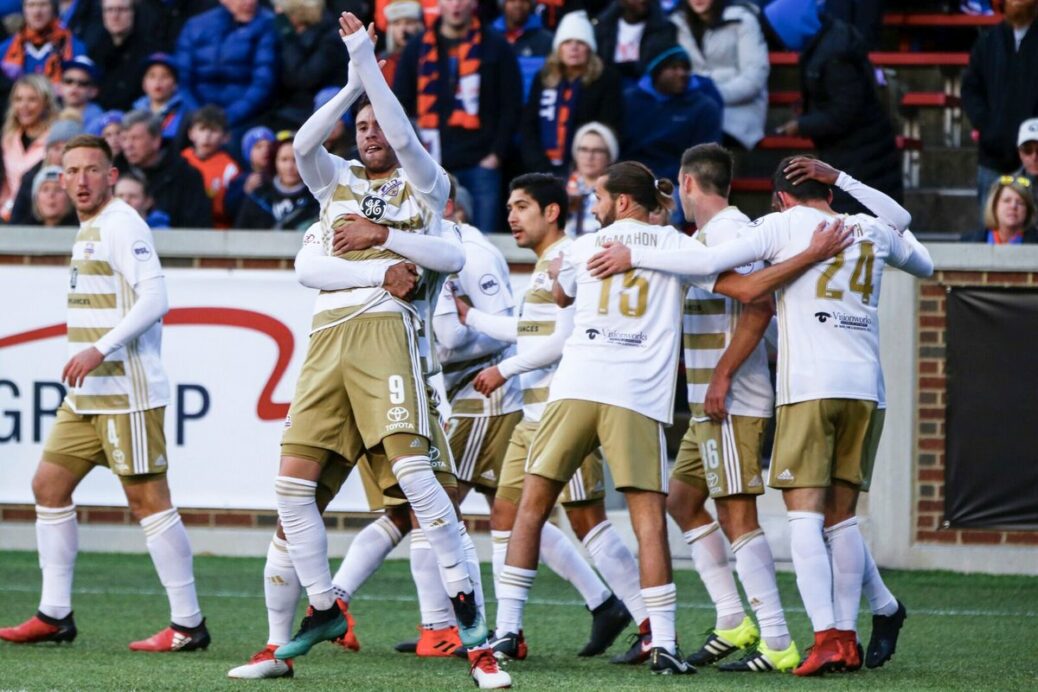 Week 4 of the 2018 USL season provided some tightly contested contests from some of the top teams in both the Eastern and Western Conferences.

Louisville City FC continued their perfect start to 2018 with a win over another team looking to unseat them at the top of the eastern conference in FC Cincinnati.

The Portland Timbers 2 look like they might rebound for a strong season after the disaster that was 2017 for the Pacific Northwest outfit. They now just one win shy of their total haul last season.

Real Monarchs SLC look like they might repeat as leaders in the Western Conference, finding a big road win this week against Phoenix Rising FC.

Let’s take a look at all the action from week 4:

Neco Brett emerged as the scoring threat the Riverhounds have been missing in their first three matches this season. TFC II did well to hold back the home side in the first half, but once the defense cracked, the wheels fell off for the visitors.

Neco Brett scored a hat trick with goals in the 52nd, 59th, and 83rd minutes. Brett added an assist to round out his terrific match serving up Christiano Francois to finish up the scoring in the 88th minute. Bob Lilley has shored up the defense for the Riverhounds, and if thy can continue to score at will, the eastern conference should be on notice.

For a match that ended level, the Kickers and NYRB II provided an entertaining match where the Red Bulls had the better of the play.

The Kickers held the Red Bulls from finding too much danger after Brian Shriver scored the opener in the 17th minute on a free kick. All told, the NYRB II outshot the Kickers 20 to 5 in the match, but only managed to score once, from Jose Aguinaga in the 69th minute.

The Kickers and NYRB II find themselves in more positive positions in 2018 compared to last season, and both will hope to keep up their early results against the more powerful teams in the conference.

LCFC are standing tall in 2018 after an offseason that saw little change to the 2017 USL Champions. Last week, LCFC knocked off the Rowdies, this week they took down the previously unbeaten FCC.

It only took a single goal from Cameron Lancaster in the 13th minute to see this one out for LCFC. Lancaster’s goal was the first FCC had conceded this season.

FCC tried in earnest to climb back into the match, but Greg Ranjitsingh did well to keep Danni Konig, Lance Laing, and Emmanuel Ledsma off the board and secure their third straight clean sheet.

Indy Eleven got their second win of the season on the back of a 15th minute goal from Tyler Pasher and a late penalty stop.

Pasher raced into the box with minimal pressure on a pass from Justin Braun catching the entire NCFC backline out of position. The midfielder calmly slotted the ball into the net with a low finish to the far post.

NCFC looked to have rescued a point in the match, earning a penalty kick in stoppage time, but Indy Eleven goalkeeper stopped the effort from Kyle Bekker to secure the win.

The Rowdies were quick to forget about first loss in 2018 with a dominant win over the Fury at home.

Four different goal scorers contributed to the score line, showing the talent-laden squad in their best light. After a scoreless first half, the game came alive in the 60th minute when Georgi Hristov opened the scoring with his third of the campaign.

Over the final 30-minutes, Leo Fernandes contributed a goal, an assist, and forced an own goal continuing his fine form to start the season.

Joe Cole and Zac Portillos each added to the scoreline, sending the Fury packing and asking some serious questions about their defense.

The Switchbacks had not scored a goal since their opening win of the season. The Toros had yet to lose a match in 2018. The Switchbacks made sure to change both of those stories with a 2-1 victory.

The opening half saw both sides lack sharpness to create danger, and it seemed like this one would be destined for a 0-0 draw.

In the second half, Josh Suggs finally broke the scoring drought in the 63rd minute. Suggs sent in a free kick into the box that eluded both offensive and defensive players, but found the back of the net.

With the scoring drought finally behind them, the Switchbacks doubled their advantage with a Jordan Burt goal from the penalty spot in the 70th minute.

The Toros nearly climbed back into the match with a goal in the 80th minute from an Aldo Quintanilla header, but could find no further purchase.

It is not clear whether the Timbers 2 have shaken off the ghosts of 2017, or if they just took advantage of an OKC Energy team that is in the middle of a major downturn.

After winning their opening match, OKC came into this match with three straight losses.

The Timbers 2 leaned heavily on Augistine Williams to provide on the night, and provide he did. Williams was a consistent threat, notching two assists on the Timbers 2 first two goals.

Foster Langsdorf scored in the 34th minute on a first time finish from Williams, and Victor Arboleda latched onto a ball from Williams finishing low to the left corner in the 54th minute.

The Timbers closed the match out with an 84th minute penalty kick from Lamar Batista. The Timbers 2 are now just one win behind their total from 2017.

NSC’s defense first philosophy is proving itself with a strong run of form in their inaugural season.

After losing their opening match to Lousiville City FC, they have held three straight shutouts, including Saturday’s 2-0 win over the Independence.

Alan Winn opened the scoring for NSC in the 24th minute with a beautiful bit of foot work and deft finish with his left, curling inside the far post.

Matt Pickens did his job in net for NSC, stopping the Independence’s Jorge Herrera’s free kick in the 57th minute and preserving the lead for NSC. Pickens then set up the final goal of the match to Ropapa Mensah in the 90+1 minute.

The Foxes lost their season opener, but have gone on a four match unbeaten run that is seeing them push their way up the western conference standings.

STL FC came into the match on the heels of their first win of the season, and it looked like they might make it two in a row with a goal just before halftime.

Newly acquired striker Corey Hertzog scored from the penalty spot in the 45+2 minute after a handball in the box. Hertzog made the goalkeeper guess the wrong way, and sent STL FC into the halftime break with a 1-0 lead.

The lead would be short lived as the Foxes scored immediately in the second half, ultimately earning the point for the visitors. Juan Pable Caffa’s perfectly flicked on header in the 47th minute brought the sides even with almost an entire half to play.

Alas, no winner was found in the final 45 minutes, and each side will feel good about walking away from this one with a point.

Kharlton Belmar was back on the score sheet, but the Rangers couldn’t hold onto the road victory over SAFC, settling for a draw.

Belmar gave the visitors the advantage in the 29th minute firing a low shot home from the right side of the box to the near post.

The lead was ultimately short lived, as SAFC equalized just four minutes later when Pecka scored in transition catching the Rangers out of position following a turnover.

SAFC continued to find chances, but couldn’t finish them, splitting the points with the Rangers.

OCSC is on an incredible run of form in their last three matches, outscoring opposition 9 to 0.

This time out, it was Mark Segbers leading the line for OCSC. Segbers scored in the 45th and 58th minutes putting the game to bed with more than 30 minutes remaining.

Los Dos never looked capable of mounting a comeback on the night, surrendering the final goal to Nansel Selbol in the 88th minute.

Koji Hoshimoto proved vital in the win as well, adding the assists on each of the final two goals. OCSC now sits atop the western conference.

Sebastian Velasquez scored in the 56th minute on a quick counter attack. Maikel Chang got free on the left wing and cut the ball back to Velasquez who finished the sequence off with a easy finish from 10 yards out.

Rising’s best chance to equalize came in the 73rd minute as Solomon Asante’s cross found Chris Cortez for the flick on, but the effort was just wide of the goal.

The results haven’t been the prettiest for Sac Republic in 2018, and Saturday night’s match against the Sounders FC 2 was no exception.

In a match that saw each side with a reduced number of men at the final whistle, Sac Republic managed to edge the Sounders and keep pace with the other western conference leaders.

Adam Moffat’s 71st minute penalty was the difference as a physical match got a bit out of hand.

Sac Republic was reduced to 10 men in the 20th minute when Michael Taintor was guilty of a DOGSO infraction that saw him sent off. Not to be outdone, the Sounders FC 2 evened up the man advantage when Rodrigue Ele was dismissed for his second yellow card just before halftime.

The Sounders were reduced to 9 men when Denso Ulysse received a straight red card for a poor sliding challenge from behind.

The Steel FC and Battery show saw both sides split the points on first half goals.

The Battery got on the board first when Skylar Thomas headed home a Jarad van Schaik corner kick in the 42nd minute.

The Steel FC answered right back, also scoring following a corner kick in the 45+4 minute. Cory Burke pounced on a the ball after the corner kick hit the crossbar, turning the ball into the net and helping to share the point.

Newly signed Tommy Heinemann got on the board for Penn FC before Jon Gallagher equalized for ATL 2.

Tommmy Heinemann broke the deadlock with a first time finish from the top of the box on a ball knocked down by Richard Menjiar in the 31st minute.

ATL 2 would remain scoreless at the break, but finally found the equalizer in the 63rd minute. A quick counter attack saw Lagos Kunga get free on the left wing, crossing the ball to Gallagher for a leaping header and his third goal of the season.

ATL 2 and Penn FC traded blows through the rest of the match, but neither conjured up a winner.