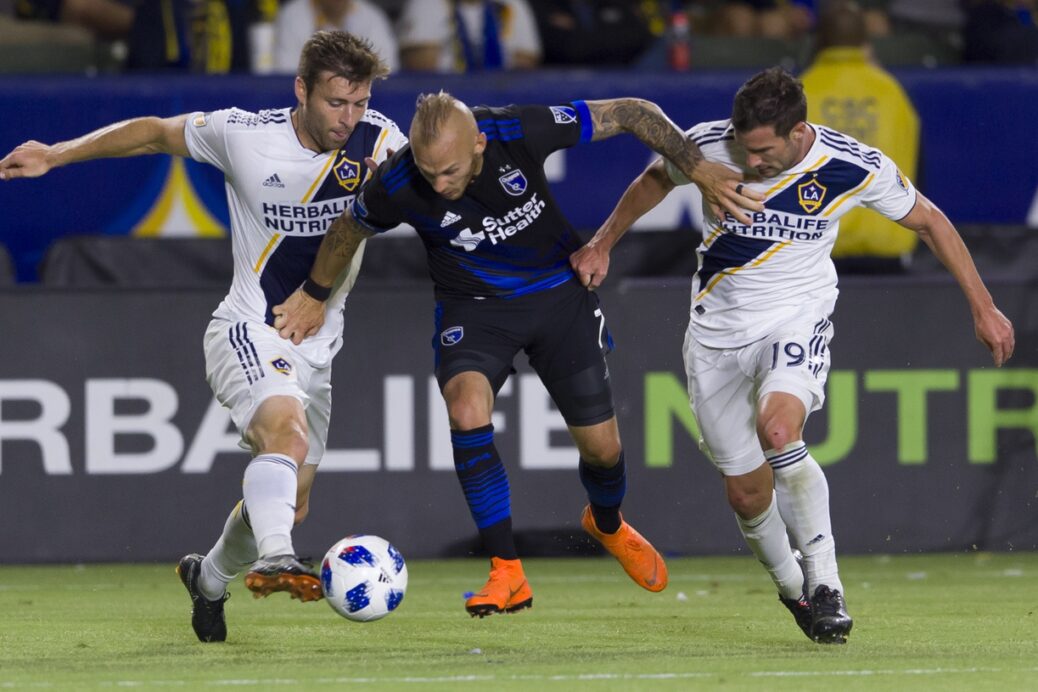 The LA Galaxy didn’t have Zlatan Ibrahimovic, but still found a way to snatch the first installment of the California Clasico.

Romain Alessandrini’s late winner helped the Galaxy post a 1-0 victory, their second in a row.

The derby showdown capped a busier-than-normal Friday night in MLS action, with three matches on the docket.

Following their 2-2 home draw against Vancouver a week ago, Dallas used a first-half winner from Maxi Urruti to claim all three points.

Here’s a closer look at all of Friday’s action:

FC Dallas used a first half winner from Maxi Urruti to claim all three points at BMO Field in a 1-0 triumph against Toronto FC.

Urruti’s smooth left-footed finish found the back of the net in the 11th minute which was all the visitors needed offensively. The Argentine now has six goals in 12 appearances this season.

Giovinco was later kept out by Gonzalez in the first-half, before the American also kept out Victor Vazquez in the second-half.

Jay Chapman’s 99th minute header just missed, as Dallas held on for the win. Gonzalez made nine saves in the clean sheet.

Toronto next begins a two-match roadtrip in Columbus on June 2nd, while Dallas faces the LA Galaxy next on May 30th away from home.

Man of the Match: Urruti deserves praise for the winner, but Gonzalez was man of the match. The 23-year-old made his first start of the season on Friday and was huge for his team.

Moment of the Match: Toronto had many chances to level the score but none bigger than Giovinco’s PK in the first-half. Gonzalez got down quick enough and repelled the Italian’s effort out to preserve the lead.

Match to Forget: 20-year-old Liam Fraser was a quiet figure for Toronto FC. The Canadian failed to get a shot on goal and was later subbed off in the dying moments.

The Houston Dynamo grabbed their third win out of their last four fixtures as they rolled past NYCFC 3-1 at home.

David Villa’s eighth goal of the season opened things for the visitors in the sixth minute.

However the lead did not last long as Alejandro Fuenmayor headed in his second of the season in the 21st minute. The defender got on the end of Romell Quioto’s cross and beat Sean Johnson to the bottom-right corner.

Tomas Martinez snatched the lead for the Dynamo in the 69th minute before Alberth Elis scored from his own rebound in the 80th to seal the deal.

Joe Willis made five saves on the night, while Johnson made seven in the road defeat.

Houston now jump to fourth place in the West and next face Real Salt Lake on May 30th.

NYCFC lose their third road fixture of the season and return home for a June 2nd clash with Orlando City.

Man of the Match: Tomas Martinez was an active force for Houston again, scoring the winner in a huge home win. The Argentine completed 45 passes, which was the most by any Houston offensive player.

Moment of the Match: Martinez’s goal put Houston in front while Elis’ finish sealed the deal. NYCFC still had a go at things but ultimately couldn’t recover.

Match to Forget: 31-year-old Maxi Moralez was disappointing in the loss, failing to record a shot on goal. Despite five goals this season, Moralez lacked the final product which is a shock to see.

The first Cali Clasico of the season went the way of the LA Galaxy after Sigi Schmid’s side grabbed a 1-0 win over San Jose.

After it looked like both teams would be settling for a point, Romain Alessandrini broke the scoreless deadlock in the second-half.

The Frenchman rifled home a blistering effort past Andrew Tarbell into the top-left corner to give LA a 1-0 advantage in the 82nd minute.

San Jose’s struggles in front of goal continued as they mustered one shot on goal out of their ten in total.

LA was not the best in front of goal either but a single moment of magic by the 29-year-old Alessandrini sealed the Galaxy their second straight win.

LA next faces FC Dallas at home on May 30th, while the Earthquakes next travel to Chicago on June 2nd.

Man of the Match: Both teams lacked the final effort in front of goal but a single moment of talent by Alessandrini sealed the win for LA. After a sensational season a year ago, the winger netted his first goal of the new campaign which proved to be a winner.

Moment of the Match: The only goal on target for San Jose came ahead of stoppage time by the dangerous Danny Hoesen. However, former SJ keeper David Bingham saved it with ease preserving his second consecutive clean sheet.

Match to Forget: Chris Wondolowski looked like a lost man at times for San Jose, again failing to make an impact offensively. The 35-year-old only has two goals in 12 matches this season.