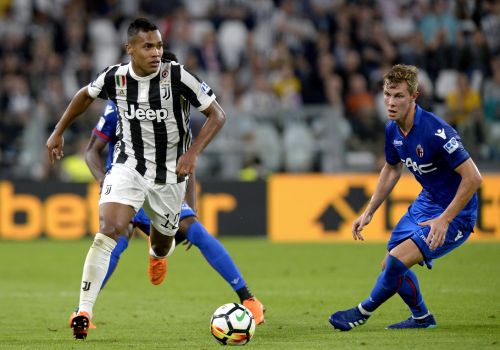 Juventus knew if they wanted to take one step closer to their seventh consecutive Serie A title, they would need a strong performance at home against Bologna. Max Allegri’s side had to dig deep in the second-half for all three points in a 3-1 home success. An own goal by Bologna’s Sebastien De Maio leveled the two sides in the 51st minute, after Simone Verdi had handed the visitors a first-half lead in the 30th minute. Sami Khedira put Juventus ahead in the 63rd minute after scoring his ninth league goal of the campaign. Paulo Dybala finished Douglas Costa’s assist in the 69th minute to seal the three points for Juventus at the Allianz Stadium. Juve now sits seven points clear of Napoli, and will clinch the title if their closest rivals lose on Sunday.

Elsewhere, PSG was held on the road at Amiens while Borussia Dortmund fell at home. Stoke City was relegated from the English Premier League following their home defeat to Crystal Palace. Juventus welcomed Bologna to Turin in Serie A action. Sevilla defeated Real Sociedad in La Liga play.

Stoke City was relegated from the English Premier League on Saturday following a 2-1 home loss to Crystal Palace. The Potters held a first-half advantage from Xherdan Shaqiri’s free kick in the 43rd minute. James McArthur’s left-footed finish on a Palace fast break leveled the sides at 1-1 in the 68th minute. Patrick van Aanholt played the hero for Palace, scoring his fourth goal of the season in the 86th minute which sealed Stoke’s fate. Paul Lambert’s side will be playing second-tier football in 2018-19, for the first since 2007-08. Palace are up to 11th place in the standings, extending their unbeaten run to five matches.

Sevilla claimed their first league victory since March 3rd with a 1-0 home success over Real Sociedad on Friday. A penalty kick winner from Ever Banega in the 47th minute was all the hosts needed to hand Sociedad their second defeat out of their past three matches. Sandro Ramirez drew the foul from Diego Llorente which set up Banega to score his fifth goal of the season in all competitions. Sociedad only recorded one shot on goal in the loss, which drops them into 11th place in the table. Sevilla are up to seventh following the much-needed win.

Villarreal continued their push for a top-five finish after a 1-0 home win over Valencia at El Madrigal on Saturday. The hosts were kept out on numerous occasions in the match, but broke the deadlock in the 86th minute. Mario Gaspar headed in Manu Trigueros’ cross from a set piece to hand the hosts their third consecutive victory. Valencia are winless in their last five matches, scoring only three goals over that span. Villarreal are two points back of Real Betis who sit in fifth. Valencia remains in fourth place and should be safe there with two matches remaining.

Borussia Dortmund’s second place hopes ended on Saturday as the hosts fell 2-1 at Signal Iduna Park to Mainz. A pair of goals scored by the visitors in the opening 13 minutes was all Mainz needed to claim the three points. Ridle Baku opened things in the fourth minute before Yoshinori Muto headed in Mainz’s second of the first half in the 13th. Jadon Sancho set up Maximilian Philipp in the 16th minute to pull one back for Dortmund but that was the closest they would get to a comeback. Dortmund could finish the season as low as fifth depending on next weekend’s results. Mainz are guaranteed Bundesliga safety for next season with the win.

League winners Bayern Munich used a trio of second-half goals to defeat relegated Koln 3-1 away from home. James Rodriguez’s close range finish in the 59th minute leveled the sides after a Niklas Sule own goal had Koln ahead 1-0 in the first-half. Robert Lewandowski put Bayern ahead in the 61st minute after scoring his 39th goal in all competitions this season. Corentin Tolisso headed in an insurance goal for Bayern in the 78th minute to cap the final score at 3-1. Koln, who are already relegated to the 2. Bundesliga for next season conclude the season at Wolfsburg.

Here’s all of Saturday’s Bundesliga results:

A.C. Milan rolled their way to a dominant 4-1 win over Hellas Verona at the San Siro on Saturday, using a pair of goals in each half. Hakan Calhanoglu and Patrick Cutrone each got on the scoresheet in the first-half to give Milan a 2-0 halftime advantage. Ignazio Abate extended the lead for Milan in the 49th minute, blasting a right-footed shot into the top-right corner. Lee Seung-Woo pulled a consolation goal back for Hellas in the 85th-minute, but it was the lone cheer the visiting fans could do. Fabio Borini’s fifth goal of the season in all competitions, added to Milan’s lead prior to stoppage time. Milan are in sixth place now, while Hellas are relegated to Serie B with the loss.

Ligue 1 champs PSG had to settle for a point on the road at Amiens, drawing 2-2 on Friday. Edinson Cavani’s opener came in the 26th minute for PSG as the Uruguayan finished from close range. Moussa Konate leveled the score in the 47th minute for Amiens as he slotted in a right-footed effort into the bottom-left corner. Christopher Nkunku’s long-range effort in the 64th minute put the visitors back in front but the hosts were able to grab a point late. Konate like his first goal, was able to score again with his right foot but this time into the high center of the goal. Amiens jumped into 12th place with the point while PSG have drawn their last two matches.