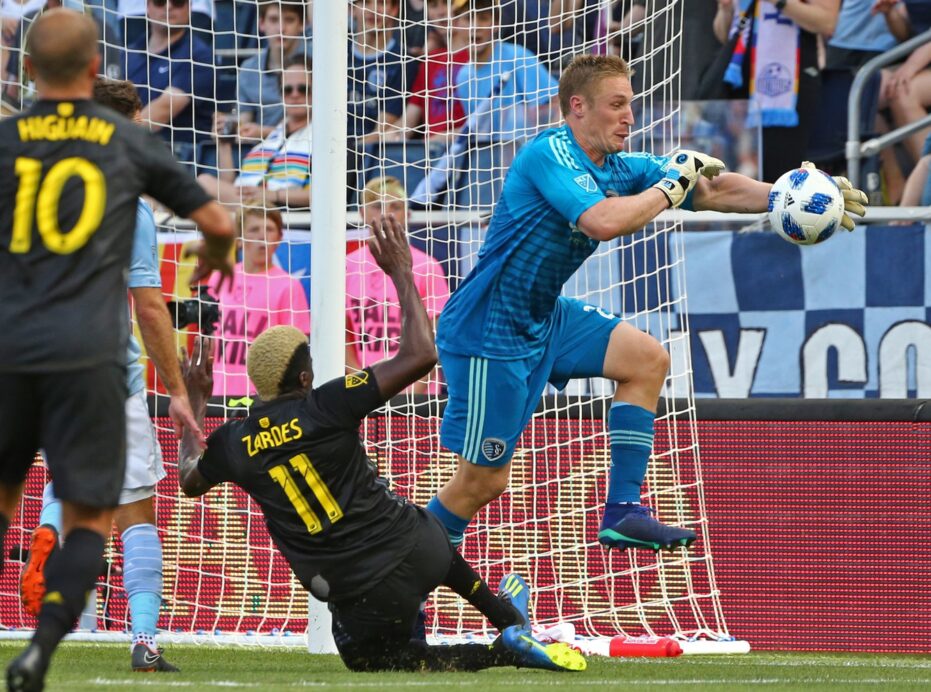 Neither the Columbus Crew or Sporting KC could claim all three points in Sunday’s showdown, but that didn’t stop the match from being a thriller at Sporting Park.

Tim Melia came up with a huge penalty kick save on Gyasi Zardes, while the hosts could not get the better of the 10-men Crew in a 0-0 draw.

After fouling Zardes in the 41st minute, Melia made up for the foul by diving to his right and keeping out the American forward’s spot kick.

Federico Higuain saw a straight red card in the seventh minute of first-half stoppage time after catching Roger Espinoza on the heel with his cleat. Video Review was used by referee Robert Sibiga and Higuain was sent for an early shower.

Peter Vermes’ side had the better of the chances in the second-half, with Khiry Shelton striking the left post in the 51st minute.

Daniel Salloi forced Zack Steffen into a strong save later in the half which kept the score deadlocked at zeros.

Melia’s third and final save of the match, preserved the clean sheet for KC as he again stoned Zardes from close range.

The Crew (7-3-4) are second in the East, and begin a three-match homestand against Toronto FC on June 2nd.

Man of the Match: Tim Melia continued his strong season with another clean sheet for KC. His penalty kick save was superb, while also keeping the Crew out two additional times.

Moment of the Match: Zardes had the chance to give the Crew a lead and a possible winner from the PK spot. However, Melia was clutch and saved a point for his side.

Match to Forget: Higuain is an experienced player and was foolish to get sent off. A stronger second half by KC easily could’ve saw the Crew fall in defeat which would’ve made the Argentine’s afternoon even worse.