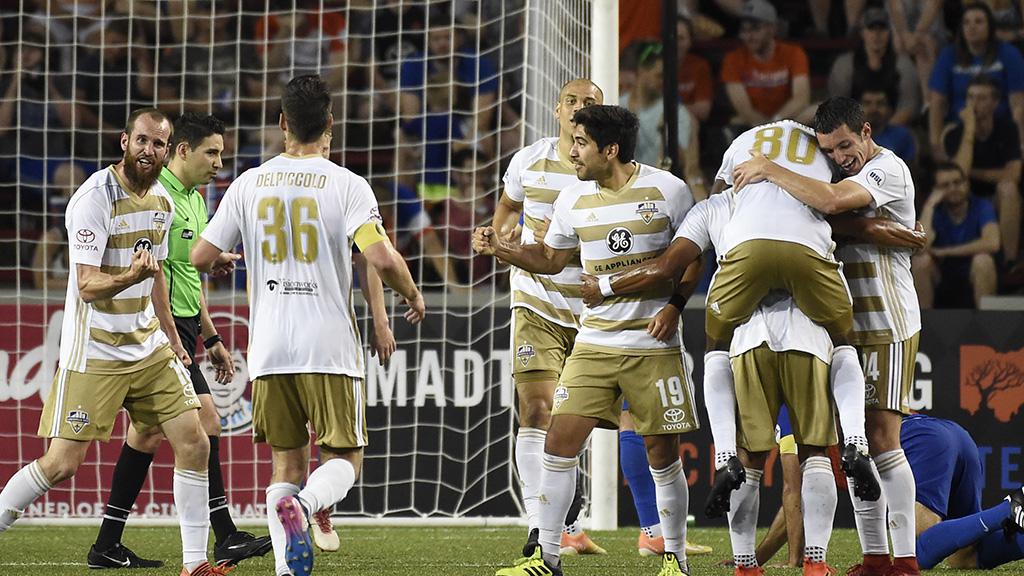 Louisville City FC led the way in Week 11 of the 2018 USL season, retaking first place in the Eastern Conference on the road.

LCFC, the defending champions, suffered two setbacks with losses to Indy Eleven, and Nashville SC, falling from the top spot three weeks ago. FC Cincinnati took advantage of the slip in form and leaped the title holders to grab the top spot in the Eastern Conference.

LCFC won the match against FCC 2-0, moving back to the top of the table, and holding a game in hand over FCC.

Elsewhere, LA Galaxy II continued their offensive breakout with a 7-2 victory over the struggling Las Vegas Lights FC. One month ago, Los Dos were struggling scoring just a single goal their their first six matches. Since then, their offense has come alive, scoring 21 goals over their next six matches.

The Lights FC could not keep pace with Los Dos, and rolled over after a very difficult second half.

Let’s take a look at the rest of the action in Week 11:

NCFC (3-4-2) won their second consecutive home match against a struggling ATL 2 (2-6-3) side that is still finding themselves in their first season. An early goal from Donovan Ewolo in the 7th minute was all that NCFC needed for the victory, but Will Crain, Daniel Rios, and Marios Lomis also added to the scoreline for a convincing victory. With their next three matches at home, NCFC will hope for maximum points and a big boost in the standings.

The Fury (3-4-3) have bounced back from a poor start, finding a third victory in their last four matches with a close result over the Steel FC (4-5-2). Kevin Oliveira’s goal in the first minute was the difference as the Steel FC fought to get back in the match but came up short. Along with the win, the Fury recorded their fifth consecutive shutout during an impressive unbeaten run over that stretch.

The Rowdies (5-5-1) claimed their first victory for new Head Coach Neill Collins with a convincing rout of last place TFC II (0-9-2). Junior Flemmings scored his first two goals of the season in the win, opening and closing the scoring in the match to seal the win for the Rowdies. The Rowdies took a two goal lead a minute after Flemmings opened the scoring when Michael Nanchoff found the back of the net. TFC II climbed back into the match with goals from Dante Campbell and Malik Johnson, but Hunter Gorskie restored the lead for the Rowdies.

The Rangers (5-2-4) earned a gut check victory over Phoenix Rising (6-3-3) to keep pace with the other leaders in the Western conference. Hadji Barry was gifted an opportunity after a failed clearance. Alone in the box, Barry held his nerve and finished into an open net to give the Rangers the lead in the fourth minute. Phoenix Rising fought hard to get back into the match, but failed to break through the Rangers strong defense.

The Timbers 2 (7-3-2) made a strong statement of intent, knocking off the Western conference leading Monarchs (8-2-1) 1-0. Both teams traded blows for the majority of the match, including a penalty kick chance just before halftime, and one in the second half for the Timbers 2. Poor finishing and strong goalkeeping kept the match level until the 77th minute, Dairon Asprilla finally beat Jake Leeker with a low shot. The worst to first transition is nearly complete for the Timbers 2. The victory brings the Timbers 2 all the way up to second in the Western conference, just two points back from the Monarchs.

The Battery (5-3-3) and NSC (4-2-3) traded goals Saturday evening to leave things level after ninety minutes. Liam Doyle opened the scoring for the visitors in the 25th minute following a free kick. NSC led until the 50th minute when Ataulla Guerra equalized for the Battery. The Battery had an opportunity to take the lead 13 minutes from time, but Jarad van Schaik’s shot sailed high.

The Keystone Derby Cup ended scoreless at Highmark Stadium thanks to strong goalkeeping performances from Penn FC’s (2-3-5) Romuald Peiser and the Riverhound’s (4-0-6) Dan Lynd. Peiser’s five saves led the way for Penn FC, keeping the Riverhounds at bay. The draw, while disappointing, keeps the Riverhounds undefeated now through 10 matches.

Yann Ekra and Cordell Cato proved to be too much for the Kickers (3-5-1) in their loss to the Independence (5-3-2). The duo combined on all three of the Independence goals on the night, with Cato scoring a brace and assisting Yann Ekra’s opener. The Kickers got a consolation goal from Brian Shriver, but dropped all three points at home.

LCFC (7-2-1) leaped over FCC (6-3-2) with a strong road performance to retake first place from the home side. Cameron Lanccaster opened the scoring from a free kick in the 15th minute. FCC responded well to falling behind, but struggled to create chances that challenged LCFC. With sixteen minutes remaining, George Davis IV put the game out of reach with a deflected shot that beat FCC goalkeeper Evan Newton. For LCFC, it was their second win in Cincinnati this season.

Luke Vercollone had a big game for the Switchbacks (5-6-2) as they defeated STL FC (3-3-5) at home. Vercollone struck twice in the match, first from the penalty spot in the 32nd minute, and again in second half stoppage time. Saeed Robinson added to the tally in the 61st minute. STL FC had a difficult time breaking down the Switchbacks following the second goal as the home side ceded possession to defend.

The Black and Gold derby ended all square in Tulsa as the Roughnecks (0-4-7) and OKC Energy (2-8-1) traded a pair of early goals. OKC Energy opened the scoring 45 seconds into the match as Christian Volesky received the ball on the run into the box, firing a shot across his body and into the back of the net. Joaquin Rivas provided an answer for the home side, receiving a back heel pass from Jhon Pirez and firing the shot past the goalkeeper low to the far post. The Roughnecks remain winless on the season, though the draw is their seventh of the season.

Thomas Enevoldsen once again shone bright for OCSC (6-3-2) in their dominant win over the Foxes (2-4-6). Enevoldsen opened the scoring in the 10th minute and added an assist in the 90+3 minute to close out the match. Michael Seaton also found the back of the net for OCSC in the 66th minute, heading home a corner. The Foxes are now winless since March, and their season is evaporating before their eyes.

Efrain Alverez has been dominating headlines for Los Dos (2-6-4) over the last few weeks, but Ethan Zubak stole the show in a big win over the Lights FC (2-4-4) with four goals Saturday night. Despite taking an early lead from Daigo Kobayashi, Zubak scored a hat trick between the 10th and 18th minutes for Los Dos. Kobayashi scored again in the 22nd minute, and the match went into halftime with a 3-2 scoreline. Los Dos blew the Lights FC out of the water in the second half, scoring four unanswered goals. Zubak added a fourth to his tally on the night as well as Ariel Lassiter scoring a brace, and Julian Buescher adding to the lopsided result.

1868 FC (4-2-5) continue to rebound from a slow start, defeating SAFC ()at home thanks to a strong performance from Mo Thiaw. Thiaw assisted Jerry van Ewijk on the opening goal, then added a goal of his own in the 61st minute to win the match for 1868 FC. SAFC temporarily leveled the match in the 47th minute when Omar Gordon curled home a free kick. The win puts 1868 FC into eighth place, three points ahead of SAFC.

NYRB II (4-2-5) broke their winless streak with a big victory over Indy Eleven (4-4-2). Indy Eleven held a 1-0 advantage into the break after Soony Saad finished off a quick counter attack, and it looked like the NYRB II was on their way to another disappointing result. In the second half, NYRB II took over, and put four unanswered goals past Indy Eleven. Brian White, Carlos Rivas, Amando Moreno, and Tom Barlow all scored in the match. For Barlow, it was his first goal in USL. NYRB II held a man advantage for the final 17 minutes after Nico Matern received a second yellow card for dissent.